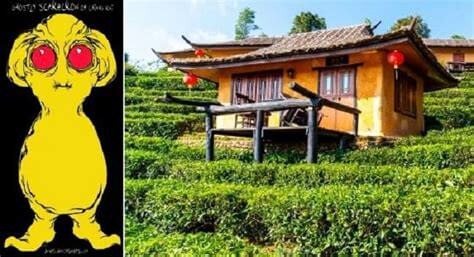 There are numerous reports of strange humanoid creatures and aliens that take on a wide variety of shapes and sizes. Stories like this are endless and often completely surreal. One of the subspecies of humanoid creatures is those that float in the air or soar, defying the laws of gravity and even physics. One such case came to us from Thailand, wherein 2005 villagers stumbled upon a mysterious floating creature.(Yellow Flying Humanoid)

In the early morning of August 31, 2005, the tiny village of Huai Nam Rak in Chiang Rai province, Thailand, about 488 miles north of Bangkok, appears to have become the destination of an underworld visitor.

This morning, over a dozen villagers were working in the rice fields and saw a yellow small humanoid about 30 inches (76 cm) levitating low above the ground, with yellowish skin, huge red eyes, a large head and ears, a tiny mouth, no arms, and little skinny feet.

The entity was first seen by a man named Saweng Bunratchasak riding his bicycle past a rice field and accidentally spotted something hovering low over the field. Initially, the man thought it was just a stuffed animal on a long stick, but then he saw that this yellow flying humanoid was moving clearly and the stick was nowhere to be seen.

The yellow flying humanoid not only was there, it noticed the cyclist and was now looking directly at him with its red eyes while making a nodding motion with its large head.

Then this creature was seen by people working in the neighboring fields and came to look at it more closely. No one dared to come very close.

According to the villagers, the creature hovered over the field for an hour. Someone described him as a “heavenly child”, others thought that it was some kind of cunningly made robot doll, because his movements were in many ways sharp and unnatural. Still others believed that this was not a living creature at all, but a ghost. Still others were convinced that this was an alien who wanted to make contact with them.

It was unclear how this creature moves over the field and hangs in the air, there were no noticeable mechanisms or noise from the screws. From time to time it itself tried to approach people and looked at them “as if asking for help,” but then suddenly flew away, rose high in the sky and disappeared forever.

According to some eyewitnesses, before disappearing forever in the sky, this creature sharply stretched in height and turned black. And when it was at a very high altitude, it turned into a bright shining ball.

“The alien is about 70 cm tall, has yellow skin and a flat chest. His mouth is very tiny. He has a large bald head with big eyes and big ears. him, he soared into the sky in bright light. “- this is how one of the eyewitnesses described it.

When the strange sighting became known to reporters, hundreds of curious people began to come to these rice fields, accompanied by teams of reporters from the news sites.

Meanwhile, local authorities were also puzzled by this incident and even launched an official investigation, which immediately ran into an obstacle in the form of a complete lack of any material evidence of what had happened.

Unfortunately, the poor rural farmers who saw this did not have their cameras with them, but they tried to sketch what they saw.

The police were very skeptical about all this, accusing the witnesses of drunkenness, but they all insisted that they were completely sober. In this sleepy village, where nothing special was happening, it caused a lot of excitement at the time.

A little later, a man was found who claimed that he knew what really happened here. It was a resident of a nearby village named Tongmuan Pochayloet, who claimed that in the same month he found an old helium-filled balloon doll stuck in a tree and refilled it with gas to hang outside his house as a stuffed animal. But then this doll was blown away somewhere by the wind and probably it was she who was seen in the rice fields, mistaken for an alien.

He said the doll was three feet tall, had an enormous head and small limbs. According to him, the doll was blown away from his field by the wind just two days before the “alien” sightings.

However, most of the witnesses denied that what they saw was just a child’s balloon. According to them, the creature was too realistic and really moved its legs and head, and also looked at them with very real eyes.

Among other things, they assured that the creature could move against the wind, and when it flew up, it was definitely not at the behest of the wind, but on its own. And the bright ball that everyone saw above in the sky after that was a UFO in which this creature disappeared.

Also, when Pochayloet showed them a photograph of his doll, all the witnesses said that it was not at all like what they had seen.

What kind of strange creature was seen in Thailand? Is it really nothing more than an inflatable helium doll? If it really was just a toy ball, how could so many people see it and misidentify it? Maybe these were just crazy fantasies of simple, uneducated villagers?

Be that as it may, now we can only guess what these people actually saw.