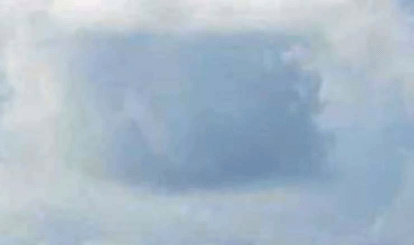 As the title suggests, this new discovery comes to us from Florida, US, as what appears to be a massive cube-shaped UFO was spotted over the clouds here.

The reason why this encounter was even captured, to begin with, is the fact that the photographer that took the picture was on the highest point of the Aliki Towers from the city of Ormond Beach.

As soon as he made the discovery, he turned on his camera and began recording. She posted about it on her personal Instagram profile, asking the people if they could explain this as anything but a UFO, to begin with.

Her name is Melly Hatchet and she said that the massive UFO could be spotted floating above the clouds for a good couple of minutes before it disappeared into space.

The UFO in question appears to be motionless at first only for it to completely vanish a few minutes later. Scott C. Waring reported on this too on his personal blog stating that it is clearly a UFO because it disappears so effortlessly. We know that the aliens have the technology to camouflage themselves away within minutes so this shocks no one, to say the least.

Many skeptics believe that this isn’t a UFO after all but just another instance of the clouds blocking the sunlight making it create rather peculiar shapes.

What do you think this could all mean?