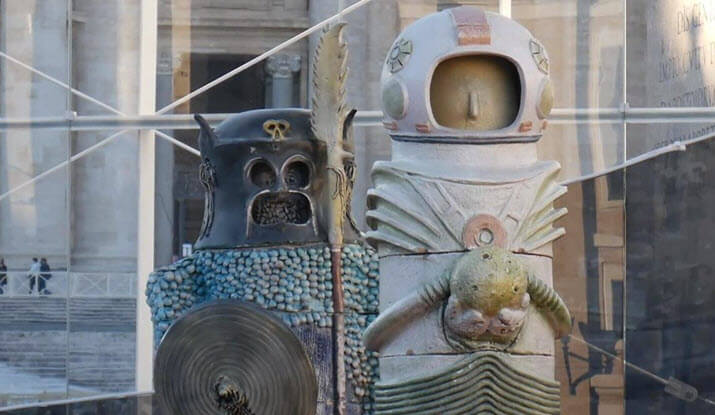 Every year a nativity scene is set up in Saint Peter´s square in the Vatican City. For Christian Catholics visiting the nativity scene at Saint Peter´s square is part of their Christmas experience and meaningful; undoubtedly a way to connect with their faith and all that it represents. The Catholic church as any other organized faith have always used art and architecture to strengthen faith and subconsciously steer their people to the direction they want. As all the above is true then why did this year´s nativity scene include among the classical representations (i.e.baby Jesus, Mary, Joseph, the Wise Men and the Angel) an astronaut and a sinister looking warrior?

There are two possibilities. Number one, that the two figures were added unconsciously and not much thought was put invested and how they could be interpreted. Maybe they thought “let´s add something modern or appealing to children”. Number two, the Vatican wants to pass a message. What could that be? Well there are so many interpretations and possibilities. Maybe the Catholic church wants to get people used to the idea of spaceman and extraterrestrials having something to do with Jesus arrival to Earth or that they are looking over us during major events. And that this could also happen in the future? All this also reminds us of the theory that the start of Bethlehem that guided the three magicians was a flying craft /UFO. One other possibility is that maybe the Catholic church is preparing for future events or the future state of the world. Who knows ?