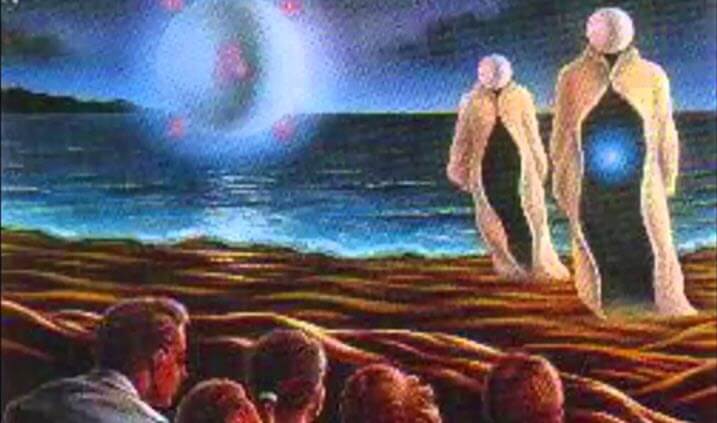 It all started with unknown lights appearing over the coastal village of Conil, Spain; every night at around 9 o´clock. After two weeks of observing this phenomena, a group of teenagers (5) decide to go to the nearby beach to better observe the phenomena.

The day is September 29th 1989; at 8:45 pm the group observes an unknown flying object over their heads. The object is shaped as a half-moon with red lights in its interior. The object moves silently away from them and hover towards the village of Conil. A few moments after, a new light appears over them. This one starts to flash and at the same time they notice another light responding in the same way over the nearby port.

All this is happening while the group is sat on the beach at a distance of 50 meters from the shore. The time is now about 9 pm and one of them scans the area with a pair of binoculars. He notices something incredible; he sees two figures moving out of the water and towards the beach. The two humanoids stand at about two meters tall; have their arms straight and stuck to their body and wear long white tunics. They do not walk but hover at about 20 cm from the ground. Their heads are white, bald, faceless and featureless. The group fearing that the humanoids are after them start to run. Then the humanoids stop and the group does the same. They are now about 30 meters apart. The humanoids turn their backs towards the group begin to observe the red light that is now over the nearby port.

Next, a luminous blueish-white ball appears heading towards the humanoids. Few minutes before it reaches them, the light stops over them. Then they sit on the sand and dig a small mound around them in the shape of a horseshoe. In a stiff manner they drop their back to the sand. Apparently the blueish ball is with them as the group observes them passing the ball from one to the other for 5 to 10 seconds.

A new figure joins this surreal scene. They now see a third humanoid standing at the feet of the other two. This humanoid is different. It stands at three meters; wears a tight fitting black one-piece uniform and has a huge head in a shape of an inverted pear.

When they look again the see that the tall figure has disappeared. The two humanoids stand-up. They have transformed into two apparently normal human beings; a man and a woman. The couple dressed in casual clothes start to walk towards the village of Conil. The group sees them disappear into the village´s streets.

If all this was not enough they now notice a cloud hovering just above the sea traveling at a high speed towards the shore. When it reached the shore they realized that it was the tall black figure again. The being stopped and hovered over the ground just staring towards the group of friends. After a few instances the being continued to move. Two of the group decided to run after it despite their friends pleading to them to come back. But, the “chase” did not last long. The two friends stopped and the being turned around and looked at them. Now at a distance of just 60 meters and with the being standing still the group noticed its features in detail. Terrified from the sighting the group decided to run away; the being was lost in the darkness.

The incident does not stop here. In the weeks that followed available testimonies indicate that some had the opportunity to track down the transformed couple. Further details to be shared soon!