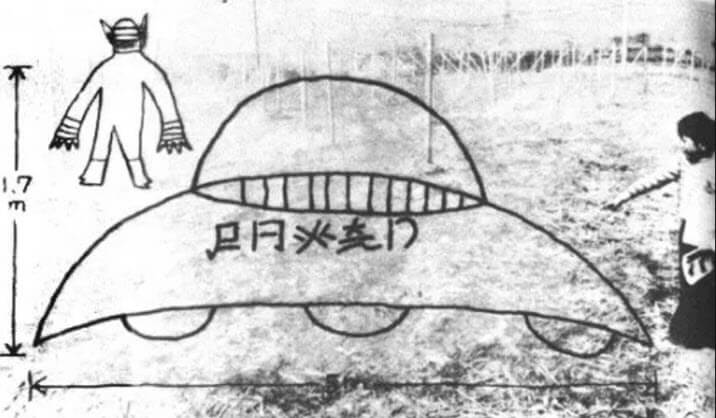 The Kofu case is considered one of the classic Japanese alien encounters of the 3rd type. We decided to share the case as our friends at the Japan Space Phenomena Society (JSPS) who have investigated the case extensively have recently re-looked at radioactivity data collected from the landing site (on the days that followed the UFO landing) and in a 2020 report have concluded that the above normal radioactivity levels on the landing site could not have been produced naturally or by human intervention. Some kind of aircraft did really land.

So what happened in Kofu? On the evening of February 23, 1975 just before 7 pm, two 7 year-olds, Masato Kono and Katsuhiro Yamahata, were roller-skating near the Hinode Housing Estate in Kofu, Yamanashi. They noticed two bright orange lights. The larger light hovered towards the mountains (mount Atago). The smaller one descended and landed on a vineyard behind the estate. The boys could not resist; they wanted to take a closer look and ran towards the landing site. The object was producing a type of crackling sound. When they approached the now landed aircraft they could take a better look at details. The UFO was disc-shaped, silver with a dome on top. It was about 5 meters in diameter and stood at a height of approximately 2 meters. It stood on the ground supported by three balls and featured unknown writing on its metallic surface. While the boys were inspecting a hatch opened from the side of the craft and a brown humanoid descended from a set of short stairs. At the same time they could also see a similar looking humanoid inside the craft. The humanoid on the ground had a height of about 1.2 meters, wore a a silver suit, had rabbit-like ears and three metal looking fangs (5-8 cm in length). Its face was heavily wrinkled, and made it appear to have no eyes, nose, or hair.

At the site of the beings the boys did not run away. The alien on the ground acted or really was initially unaware of the boys and began to explore the area around the craft. Suddenly the humanoid turned around approached Katsuhiro and patted him on the shoulder twice while talking in an unknown language that sounded like a voice recording played backwards. Katsuhiro could not handle the experience and he collapsed. Masato immediately carried him away from the site on his shoulders as quickly as he could.

The boys reached their homes and immediately informed their mothers about their close encounter with the UFO and its occupants. Their mothers followed them back to the site of the incident where they confirmed seeing an orange light pulsating in the vineyard. After 5 minutes and before they could reach the object at a closer range the UFO took off with a burst of light.

The next day, the boys shared their story with their classmates and teachers. The story was covered by the local press. One of the teachers known as Mr M who had a qualification in radioactivity handling sampled the soil a the UFO landing site and measured it using a Geiger counter. His measurements indicated that the radioactivity levels were not normal levels that can exist in nature. As discussed at the beginning of the article members of the Japan Space Phenomena Society (JSPS) recently looked at the measurements and reached the same conclusions.

Although the humanoids were only seen by Masato and Katsuhiro, several other people saw the UFO; witnesses included their mothers; Katsuhiro’s younger brother, a classmate (who saw the the UFO about a half-hour before the boys did); a janitor and a woman who was driving in the area at the time of the incident. Authorities did not provide a convincing explanation regarding the incident. They claimed that the UFO was just the lights of a propeller plane which was known to fly at low altitude.