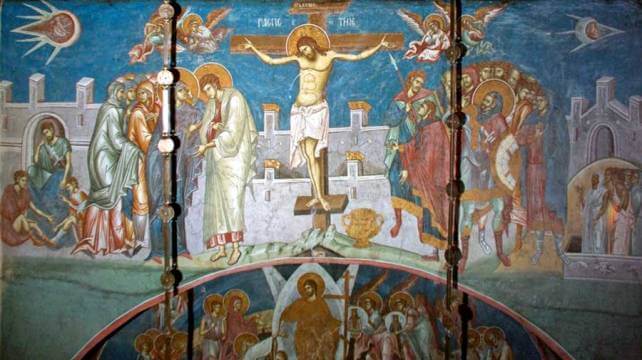 Why are there spaceships in Medieval art?
Medieval art can sometimes surprise you, with its rich colors and expressive subjects. But sometimes, you’re also caught off guard by the shock of noticing the presence of a guy in a spaceship in a painting of the crucifixion. Find out why there are so many UFOs in paintings from hundreds of years ago.

So, you are wandering around the streets of Metohia, Yugoslavia, as one does, and decide to spend some time in the Visoki Decani Monastery. You take in the atmosphere slowly, looking at the thickness of the walls — built in 1330 and still standing — and the wooden sarcophagus of King Stefan. And gradually you come up to the altar, looking at the fresco above it. Reading the informational sign next to it, you see that it was completed in 1350, which, you think, is fine, but could someone explain to you why someone in 1350 was doodling space ships above the scene of the crucifixion?
Illustration for article titled Why are there spaceships in Medieval art?
To the left of Jesus, in the sky, is something that looks like a comet with a multifaceted trail behind it. One side, though, is transparent, and inside sits a small figure. In the sky on the far right of the painting is something that wouldn’t look out of place in a drawing from the height of the 1960s space age. There’s a rounded ship with a pointed nose cone in front, a transparent scooped window for a cockpit, and three turrets in the back that look like landing struts. The shape and aesthetic are so familiar that it’s impossible to read as anything other than a spaceship.

That example is what people first point to when they talk about UFOs in medieval art, but it’s not the only thing they point to. In other artwork there are golden disks shooting down lights that look like tractor beams onto the faithful. There are random ovals, with what look like wires coming out of them, over the shoulder of the Virgin Mary while she’s holding the baby Jesus. There are disks in the sky in some paintings and what look like crude pictures of the flying saucer in the “I Want To Believe” poster above people’s heads in others.

But the space ship in the Decani fresco is the most obvious picture of what we would think of as a spaceship. What are they? Most experts agree that the resemblance of the things in the painting to the spacecraft imagined by modern science fiction artists is uncanny. But none of our own actual spaceships actually resemble what we see in the paintings. None of these paintings show things that look like planes or landers or even satellites. Instead, they show artists’ conceptions of the sort of spaceships that would look good in art.

And centuries ago, they also looked good in art. The only difference was, then the art depicted the presence of the Holy Spirit. Even if an artist saw UFOs flying around, this was a church-commissioned painting on a church wall. The church got the say in what went up on it, not the painter. When the church wanted a depiction of the (forgive the expression) alien presence of God in everyday life, and the painter came up with a design that worked. Similarly, when editors of science fiction pulp magazines wanted a cover picture depicting alien ships coming to Earth, the artist came up with a design that worked. The convergence of the images isn’t one of experience, but of artistic
We think. There is one piece of art, a woodcut, that challenges this “artistic sensibilities” idea, however. In the 1500s, once the church didn’t have the market cornered on art and artists began commonly painting for private citizens or even for themselves, artist Hans Glaser made a woodcut of a sky filled with different shaped objects. Again there were disks. There were also long tubes, bulbous crosses, and arcing streaks. This woodcut looked far stranger than anything seen in earlier paintings, but it depicted a scene that many people saw above Nuremburg. They saw tubes and crosses beginning to fight one another, and shoot fire at each other. The scene was crudely recreated, but it wasn’t any conceptual representation of the Holy Spirit.

So what do those flying space ships in early paintings represent? Probably exactly what historians think they do. Medieval people noticed comets in the sky just like any other group. They saw the northern lights, and eruptions of marsh gas, and everything people today generally mistake for UFOs. Their interpretation of those things simply differed from the modern one. As for what happened in Nuremburg — well, we have only the woodcut to let us know.

1 thought on “Why are there spaceships in Medieval art?”