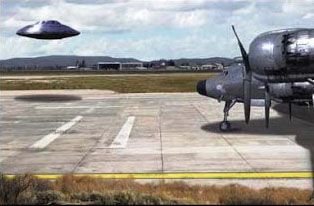 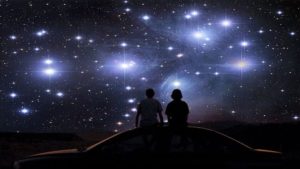 In exchange for advanced technology, the aliens would be allowed to make experiments on life stocks, minerals and a small group of humans.

With elements that would possibly have inspired the X-Files TV series. The likely event has to play with the imaginations of thousands of people.

Before the Greada Treaty
1952 Washington D.C. UFO IncidentAround 1953 some astronomers spotted a body of matter from outer space in a collision course to earth.

Further analysis those objects could not be asteroids or another natural stellar body.

A group of scientists hopes to contact and communication with the possible alien visitors.

The team succeeded in establishing a conversation by radio communication and using the computer binary language.

That did not appear a rescue mission from the 1947 Roswell UFO Incident because of the number and size of the spaceships.

At first, President Eisenhower rejected a face-to-face meeting with the aliens.

Apparently, the aliens arranged some exhibitions, on Washington D.C. and board of a United States Navy ship, of their power to the president.

The aliens told thru messages that they came “in peace.”

Just about twenty people on board, including secret service men with a small crew.

The presidential airplane taxied and stopped at about half a mile away from the base tower.

The civilians and military on the base had been told that while the president was here, this would be a “business as usual” day.

Right after the plane landed, the radar officers gave instructions to shut off all radar equipment.

The tower received another report; a third UFO spotted behind the first two

The soldier on the ground described the UFO as having a round shape with no tail, wings, and no audible engine.

The UFO approached the president’s plane sitting alone on the runway.

The first two flying saucer stopped about 300 feet over Eisenhower’s plane, and one descended on the far side of the airplane and to touch the ground about 200 feet in front of it.

The other object hovered over buildings with a good vantage point of anything that might come towards the plane and the other ship.President Dwight Eisenhower sign The 1954 Greada Treaty with aliens

From the Flying saucer on the ground opened a hatch and a small ramp touched down.

The figure of President Eisenhower descended the staircase and walked in the direction of the round shaped disc on the ground.

He paused for a short moment right at the ramp.

It appeared that he was shaking hands with another individual, but the distance would not allow a description.

The president disappeared inside the ship.

For about 45 minutes you can imagine how confused and tense the Officials, Secret Service, and base personnel felt.

Former U.S. President Dwight Eisenhower emerged from the spacecraft, with his recognizable erect military walk, towards Air Force One.

The 1954 Greada Treaty
According to witness and researchers, they discussed the Greada Treaty and signed by the US President and apparently at first with alien race know as Greys.

Later one, other races got together on the Greada Treaty, Tall Whites, Reptilians and the Anunnaki.

The 1954 Greada Treaty stats:
The aliens would not interfere in our affairs, and we would not interfere in theirs; The US Government would keep their presence on earth secret;
The aliens would furnish the US with advanced technology;
The aliens could abduct humans and livestock on a limited basis for medical examination and monitoring;
The people subjected to experiences would not be harmed, and returned to their point of abduction with no recollection of the event;
The US could also do a medical examination and genetic experience with aliens;
They should share the results;
The aliens would be granted secret facilities for their accommodations and experiences.
The Majority Twelve – MJ12
President Dwight Eisenhower established a permanent committee to oversee and conduct all covert activities with the aliens by the Greada Treaty.

This committee, created on secrecy by Executive Memorandum, NSC5410, is known as “Majority Twelve” or simple as MJ12.

In later years this operation evolved into and became known as MAJI (the Majority Agency for Joint Intelligence).

MAJI is responsible directly and “only” to the President of the United States.

1954 Greada Treaty’s Whistleblowers
These unusual events came to the public thru a few witness and researchers, some of them, supposedly, paid the ultimate price, their lives.

Gerald Light, the psychic
Gerald Light sent a letter to the head of a Southern California metaphysical organization, on April 16, 1954, claiming to see the president and Aliens spaceships.

Light’s alleged a psychic with out-of-body abilities, and that was the way he had his experience on Edwards AFB.

Phil Schneider was, allegedly, one of three people who survived at the infamous the 1979 Dulce Firefight

The conflict involved large Greys, US intelligence, and military at the Dulce underground base.

Phil Schneider was found dead in his apartment, on January 1996, with a piano wire wrapped around his neck.

Phil Schneider suffered torture and all his presentation paper and researched was not found in his apartment.

While at the State Legislature, McElroy confirms he saw a document with references to this meeting.

John Titor II, The time traveler
“Disclosed: Chronicles of John Titor II”Around September 2016, a man claiming to be the real John Titor coming from the year 2036 published a book telling his story.

On the book “Disclosed: Chronicles of John Titor II” he says that the President watch a squadron flying over Washington D.C., jets were sent to intercept it, but the planes couldn’t get it.

This event was published in the Washington Post at the time.

And in another opportunity, he was on a board of a Navy ship, and he saw another demonstration with crafts emerging from the ocean nearby, fly for a little bit and fly back to the sea.

Coming from WWII not only the US Army but other nations were decimated and could fight back against such technology.

For that matter, he decided to sign a treaty with the aliens.

The Official Story
From February 17th to 24th, 1954, President Eisenhower scheduled to make a winter vacation to Palm Springs.

But, on February 20th, rumors spread that the president was critically ill and dead while he could not be found in the facility.

The covered story told by White House Press Secretary James Haggerty was that the president had chipped a tooth, and had been taken to a local dentist.

In 1979, the dentist’s widow did not recall any memory relating to her husband’s alleged most famous client.

Except, when asked to describe details of her and her husband’s attendance (by official invitation) at a steak fry the following evening, where her husband was introduced as “the dentist who had treated the president.”

The Eisenhower Library has detailed records relating to the president’s health.

There has no record of any dental intervention in February 1954 or the Greada Treaty.

Bill Holden, who also served as Loadmaster for Air Force One traveled with John F. Kennedy to Europe in the summer of 1963.
“What do you think about UFOs, Mr. President?”
A serious Kennedy replying,

“I’d like to tell the public about the alien situation, but my hands are tied.”
Gerald Ford
President Gerald Foard remarks about aliensGerald Ford served as the 38th President of the United States from 1974 to 1977.

“Ford, what about flying saucers? We’ve had some in Michigan in the past week. Do you believe in flying saucers – you’ve called for a congressional investigation?”

“Dave, we’ve had several incidents in Michigan in the last week – incidents that many reliable good citizens felt were sufficient to justify some action by our government and not the kind of flippant answer given by the Air Force where the passed it off as some ‘swamp gas.’”
Carter
President Jimmy Carter remarks about aliensJimmy Carter served as the 39th President of the United States from 1977 to 1981.
Carter said during his 1976 election campaign, after witness himself a UFO.

“One thing’s for sure, I’ll never make fun of people who say they’ve seen unidentified objects in the sky. If I become President, I’ll make every piece of information this country has about UFO sightings available to the public and the scientists.”
Despite his earlier pledge, once elected, Carter distanced himself from disclosure, citing “defense implications” as being behind his decision.

“I occasionally think how quickly our differences, worldwide, would vanish if we were facing an alien threat from outside this world”
From Reagan’s 1988 speech with USSR’s President Mikhail Gorbachev.
President Reagan made similar remarks on many other occasions.

Adam Guelch, a member of the Mutual UFO Network (MUFON), in 2016, asked George Bush Sr when the US government would tell Americans the truth about UFOs.

I think he is wrong we can and need the Independence it would give us. Thank you, Nancy Thames