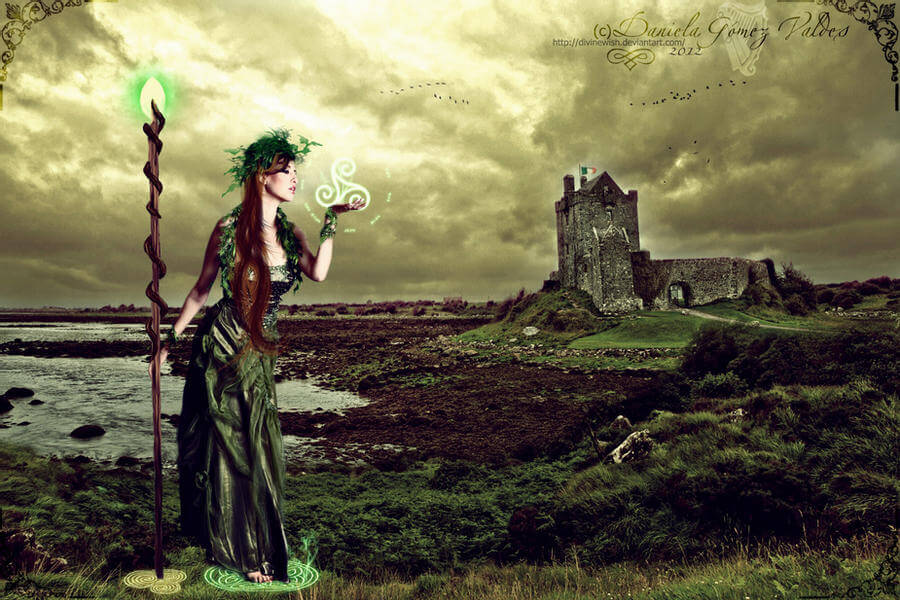 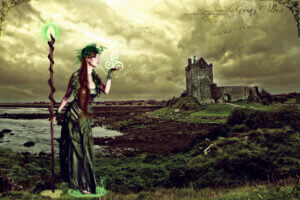 I Tuatha Dé Dannan was one of the prehistoric peoples who invaded Ireland before the arrival of the Gaeli, according to the legend the Túatha were comparable to the gods, for the ability to excel in any art, similarities emerge with the famous fallen angels of which Enoch tells us for the knowledge they knew how to master. The supernaturality of this people was linked to the inexhaustible skills of its men: they were formidable warriors, craftsmen, connoisseurs of the wisdom of the Druids.

The ethnony of Túatha Dé Danann which appears in the book identifies the first holders of this title were three young men, Brian, Iuchar and Iucharba, sons of Danann, born from an incestuous relationship with their father. Traditionally, the translation of Túatha Dé Danann is precisely “Tribe of the goddess Danu”. In this translation a problem arises: dé is not the genitive of “goddess”, but of the masculine noun “god”, since in Irish dea = bandia.

People mistook Danann’s three sons for gods, exchanged? It is the same story that happened everywhere for every population that came into contact with these beings who came from the stars, they exchanged them, given their immense power for gods, they were skilled in the arts of war and connoisseurs of druidism, so much so that the entire people who he had them as teachers and to whom they belonged, he began to be called Túatha Dé Danann, the “tribes of the gods of Danann”. 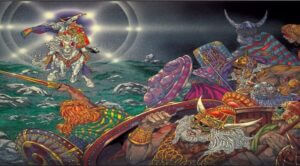 1) “.. were in the northern islands of the world, learning druidry and knowledge and prophecy and magic, till they were expert in the arts of pagan cunning”

They were so advanced that they used “flying ships” as a means of transport; legend has it that they came directly from heaven

2) “The Fir Bolg fell in that battle all but a few, and they went out of Ireland in flight from the Tuatha De Danann, into Ara, and Ile, and Rachra and other islands besides.”

“Thereafter they came in flight before Cairbre under the protection of Meldb and Ailill, and these gave them lands.”

2) “The Fir Bolgs fell in that battle all but a few, and left Ireland fleeing the Tuatha De Danann, towards Ara, Ile, and Rachra and other islands”.

“Thereafter they flew past Cairbre under the protection of Meldb and Ailill, and these gave them lands.”

3) “So that they were the Tuatha De Danann who came to Ireland. In this wise they came, in dark clouds. They landed on the mountains of Conmaicne Rein in Connachta; and they brought a darkness over the sun for three days and three nights. “

It is supposed that, in reality, the dark clouds were nothing more than the smoke produced by the ships burned by the Danann themselves, who would have set fire to the ships to prevent retreat.

The Túatha Dé Danann fought two bloody battles in Mág Tuired, defeating first the Fir Bólg and then the Fomorians. According to legend, after being defeated by the Milesi, the tribes did not abandon Ireland, but hid themselves in the basements of enchanted palaces, emerging only rarely and in various forms, to harm or benefit men. In short, the ambiguity of these figures is also reflected in their nature, sometimes evil.

The mythology of the Irish is closely related to the Celtic one, and is undoubtedly fascinating and ambiguous, it deserves much study … which deals with the famous “Otherworld” (other world), from which the Irish believed the Gods came. The otherworld was believed to be a place where there were no diseases, no aging (one day was 100 years long), no death, where happiness lasted forever. The story of this space is very similar to that of Elysium, from Greek mythology.

In Celtic mythology, the Otherworld is the kingdom of divinity and perhaps even the dead.

In mythology Gaelic is British it is usually described as a supernatural realm of eternal youth, beauty, health, abundance and joy. The Otherworld is usually elusive, but various mythical heroes visit it by accident or after being invited by one of its residents. They often reach it by entering ancient burial mounds or caves, or by going underwater or across the western sea. At times, the Otherworld is said to exist alongside ours located beyond the edge of the earth and intrudes on our world; signaled by phenomena such as magical mist, sudden changes in the weather or the appearance of divine beings or unusual animals. An otherworldly woman can invite the hero to the Otherworld by offering one apple or a silver apple branch, or a ball of thread to follow as it unfolds.

The Otherworld is usually called AnnwninWelsh mythology is Avalonin Arthurian legend. In Irish mythology has several names, including Tír na nÓg, Mag Mellis, Emain Ablach. There is also in the Irish myth Tech Duinn, where the souls of the dead gather.

Linked to the abduction phenomenon; the term “stroke” (paralysis, ), derives from Celtic / Irish mythology and is connected to the phenomenon of the “fairy-stroke”, or “the stroke of the fairy”, for which people (victims) were deprived of speech and movement (a recurring phenomenon in modern abductions) following the vision or abduction by “fairies” and strange beings from mythology. Also curious is the representation of an unidentified Celtic deity, resembling a “gray”, a typical representation of the modern alien.

Sources Tales of the Irish Peasantry

1 thought on “Who Were the Tuatha De Dannans, Aliens or Deities?”