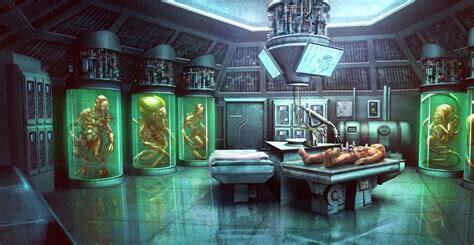 Both in science fiction and in ufology we understand abduction as the act by which one or more extraterrestrial beings kidnap a living being against their will and transport it to another place, usually to their spaceship. The stories of the abductees, mostly tell us that the kidnapped loses both the will, as the conscience, before being “transported” to that spacecraft.

Once inside the spaceship, they introduce the kidnapped in a room that looks like a laboratory, where the aliens perform experiments or investigations with the kidnapped being. The people who have been kidnapped or abducted, affirm that they believe that they have spent a long time kidnapped, but do not remember almost anything of what happened.

These people usually describe the room where they are introduced as a round room, with a dome, this room has a diffuse light that emerges from the walls and floor. The most curious thing of the case, that these people abducted is that some of these people, return with some rare metallic devices inside their body, or marks or scars of unknown origin.

Thomas E. Bullard, after conducting a study on 309 cases of abduction, states that in most cases, the following episodes tend to coincide in this order; capture, examination, excursion or trip to other worlds, theophany (appearance of some deity), return and consequences.

Abducted people usually suffer a kind of amnesia upon returning, where when they return they see that they have passed a certain number of hours, where they do not remember what happened in that period of time.

Through hypnosis, it is possible to remind the abducted person that it has happened in that period of time that he does not remember. Antonio Ribera in his book, published in 1981 “Kidnapped by Extraterrestrials” tells us about the subject.

“The subjects, in general, remember the beginning and the end of the episode, but the central part of it (the most important) has been erased from their conscious mind. This erasure has undoubtedly been made through hypnosis: they have been able to build an abduction model, according to which abductees (belonging to both sexes, although with a male preponderance) are healthy, normal human beings and not particularly interested in the UFO problem. ”

The technique of hypnotic regression, is not considered one hundred percent reliable, since hypnosis allows to suggest the individual, so it may not tell us completely true memories.

Next a fantastic documentary where they show us the experiences of the people who have supposedly been abducted, with images of what the interiors of these spaceships would look like .