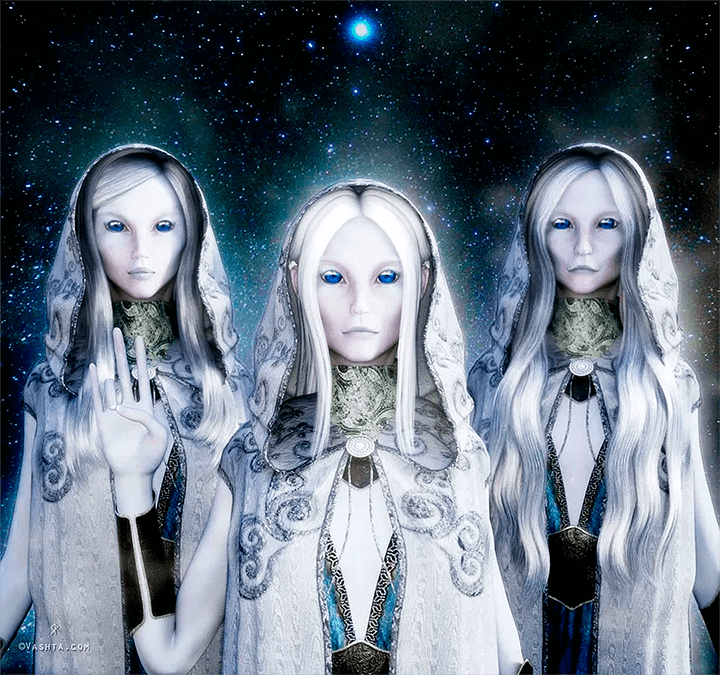 The Lyrans today are mostly beings who exist in other dimensional realms outside what we understand to be our universe.
The History of Lyra
Ages ago, there was a time when higher dimensional beings began to cross-over to even higher realms. During this process many of these beings made the choice to return to a lower vibrational state. This has been referred to as seeding.
There are references to the Lyrans being the first to seed our universe. This is somewhat true since there were many “seedings” happening at the same time.
The Lyrans chose a more passive seeding method. They remained ethereal for ages. As other seedings in the universe were developing into tangible bodied forms. The Lyrans also decided to do so too.
Lyrans had the ability to chose what their first embodiment would be like. Many chose the closest to the their ethereal forms, the cat/feline. Others chose a more humanoid body.These humanoid bodies came in a large variety. There were large range of skin tones. Some were very small beings, others very large beings. There were many bipedal cat faced people. Some even chose extremely human bodies with barely any cat features at all. i.e. a human with cat’s eyes.
It is said that humans were genetically created by Lyrans. Although the Lyrans brought with them a vast knowledge of genetics. It was only by breeding that the Lyran people created genetic strains that eventually mixed with other non-Lyran races.
In most Galactic histories, there are records of the Draco-Lyran war. Unfortunately, there is a lot different versions on what really happened. Because the Lyrans weren’t prepared for contact with the more advanced Draconian military. Most of what is remembered, is only a vague memory of the fact.
At the time, the Draconians had other political interests that caused the war. Lyra’s diversity was a threat to the careful genetic work that the Draconians developed with their allies. The Draconians were actually a militant race that was carrying out orders from above.
The allies of the Draconians were purely a psychic race that had not yet found a suitable-tangible form. They had a contract with the Draconians. Their allies would give the Draconians powerful training on psychic mind control and technologies in return the Draconians would do genetic research and farm supplies for their allies.
There was a long period of peace between the Draconian military and the Lyrans. At one point, the Lyrans even agreed to Draconian hybridization, cloning, and genetic testing. If the Lyrans understood then that the Draconian were only “following orders” they would have contacted their ethereal brothers and fought psychically with the Draconian allies. So peace ended marked by the destruction of many Lyran planets.
When this happened, many Lyran incarnations simply made a choice to return to a higher dimension. Others reincarnated in far away places.
ARE YOU A LYRAN STARSEED?
A Lyran will l have the usual Starseed characteristics, though here are some extra characteristics that are unique to Lyrans.
The knowledge or feeling that they can’t “go home”. This is caused by the knowledge that their first Lyran incarnation was on a planet that was destroyed.
The person will also have a sense of underlying authority. People will tend to gravitate to you and trust your thoughts, judgments and opinions. The person may not be in a high position of authority, but nonetheless people recognize your authority.
There is an element of being stern or serious. Not that a Lyran can’t be lighthearted and giving. Lyrans have the ability to give “tough love” when needed.
Having a connection to cats. The original Elders who seeded Lyra had similarities to what we know as “feline”. So this can be anything from remembering being a cat-like humanoid to understanding cats like you would any other person.
Some Lyran Starseeds have anger or fear towards Draconians. They even can be afraid of “coming out” as Lyran because they could be “found”. This is due to the Lyran-Draco war. Other Lyran Starseeds will feel a connection to Draconians. This is because before the Lyran planets were destroyed a small number of Lyran-Draco Hybrids were born.
Some may feel that they are a keeper of knowledge. Before the destruction of the Lyran planets a group of sages, elders, and teachers escaped to safety. This group took the Lyran secrets with them and made a promise to store the knowledge safely through lifetimes.
Lyrans can also have a shyness about them. A quiet nature that may seem aloof or distant. Being a loner can feel very comfortable to a Lyran. This causes Lyran Starseeds to make unusual first impressions.
Many Lyrans know that they have ancient roots. Yet, they have trouble finding their Starseed connection. This is because they identify with multiple Star Systems. Most Lyrans have incarnated as Andromedans, Pleiadians, Arcturians, Sirians, Vegans, Centaurians, etc. after their system was destroyed.
Jeans Creation

The Cosmos of Soul: A Wake-Up Call For Humanity. Print 2008.