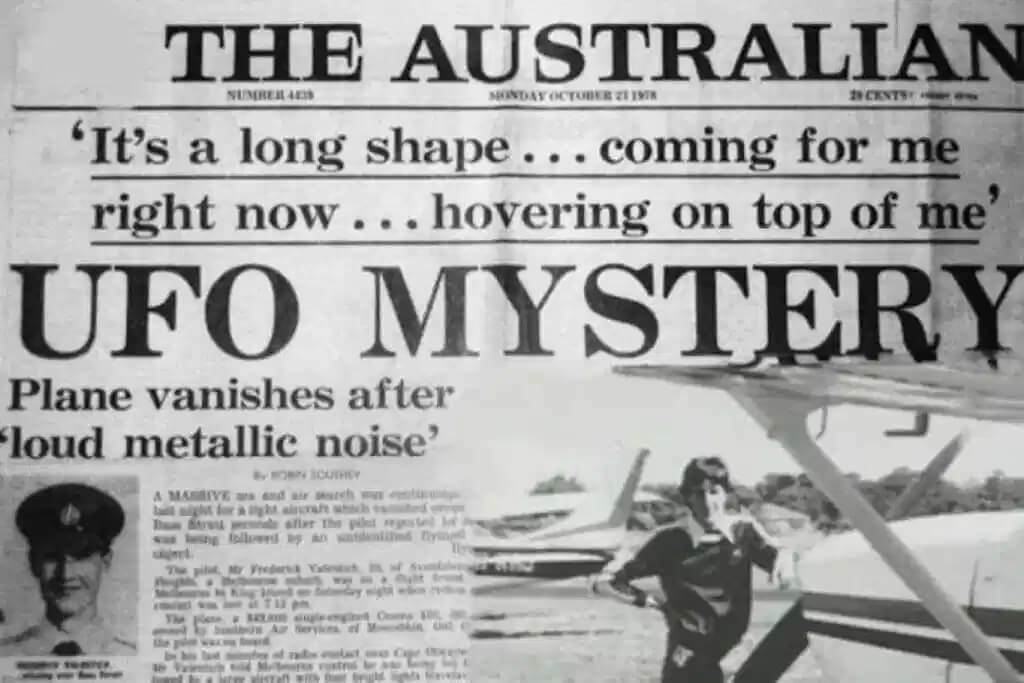 There are many stories about people missing in strange and sometimes inexplicable circumstances. Most of them are rather fascinating and close to sci-fiction. But a story of the disappearance of Australian pilot Frederick Valentich is documented in detail and at the same time baffles the reasoning of everyone who comes across it.

Since his childhood, Valentich had a great passion for aviation and flying. In 1977, at the age of 18, after he sat in the cockpit of a helicopter, he decided to become a pilot. He lived in Melbourne with his parents and a younger brother named Richard who was only 12 when Frederick vanished. It is said that he had about 150 total hours’ flying time and was also certified to fly at night under special conditions. Nevertheless, he failed flying tests twice and during the performance of the test exercises, at least four times created dangerous situations on the ground and in the air.

On October 21, 1978, Valentich (20) planned a date with his fiancee Rhonda Rushton to fly in his light-engine Cessna 182L aircraft from Moorabbin to King Island. Somehow, the plan failed as Rhonda could not leave work earlier and also unable to call him. Due to the tight schedule of the flight, Valentich had to leave her behind, began his flight at 18:19 and flew at an air level of 1500 m.

The plane flew to the island, not over the shortest distance, but making a broken line to minimize the duration of the flight over the Bass Strait, a sea strait separating Tasmania from the Australian mainland. At the 41st minute of the flight, the plane reached Cape Otway and turned towards the strait.

At 19:06, Valentich informed the ground control service of Melbourne that he had seen an unidentified aircraft flying higher and faster. The controllers did not know anything about the planes flying in that area, and the radars showed that Valentich was flying all alone. Nevertheless, Frederick insisted that there was a large aircraft next to him, which appeared and disappeared from his view. Over the next 5 minutes, he continued to talk about the spaceship flying around him, however, he did not give any detailed description of it. The only significant information related to the appearance of the UFO given by him was that it had four landing lights.

During his communication with the controller, Valentich said that he began to fly in a circle. The next minute, he said that the object was approaching him from the southeast and that it was not an airplane. Over the next several seconds, signal disturbance was heard on the radio, after which they lost communication.

It has been over 43 years since Valentich’s plane disappeared. The search operation carried out in the Bass Strait and on King Island had no result, although it continued until October 25. The investigation carried out by the Australian Minister for Infrastructure and Regional Development, lasted for 3.5 years. On April 27, 1982, it ended with a laconic verdict and the reason for the disappearance of the aircraft has not been determined.

Richard Valentich said there was no family fixation on UFOs. “The concept of a UFO taking my brother is very far out there,” he said.

Did he encounter UFO that made him crash or was he abducted by aliens?

The people in authority tried to destroy all records of his flight. It was done ostensibly in order to announce that on October 21, 1978, there was no such flight at all. Moreover, the original audio recording of Valentich’s conversations with the control room has disappeared. In 2008, BBC officials formally requested the original audio recording from the Australian Ministry for Infrastructure but never received it.

At the end of 1978, dozens of reports were received about strange objects and incomprehensible optical phenomena in the sky over the western part of the Bass Strait. In 1998, it became known about the existence of three witnesses, who on October 21, 1978, watched from the shore a flight over the Bass Strait of a light-engine aircraft, which was pursued by green lights.

Interestingly, there was a witness on the ground who claimed to have seen a green light just above Valentich’s plane. The last piece of audio recording with a duration of 17 seconds, in which strange grinding sounds are heard, was examined by researcher Richard Haines. According to him, this audio fragment contained 36 sound signals (bursts) of different frequency spectrum without a clear rhythmic pattern.

UFO researchers have made great efforts to find possible witnesses of the incident with Valentich. According to them, they managed to find more than 20 people who were near the coast in the area of Cape Otway before, during, and after the sunset on October 21, 1978, and who had seen an unidentified object or incomprehensible optical phenomena in the sky.

Richard Valentich is still convinced that his brother was abducted by aliens. In all his interviews, he invariably declared that what had happened to his brother cannot be staged and has no rational explanations. Frederick Valentich is still officially listed as a missing person, and his family members still hope that one day, his disappearance mystery will be solved.

1 thought on “The Disappearance Of An Australian Pilot Who Was Followed By A UFO! Never Found!”