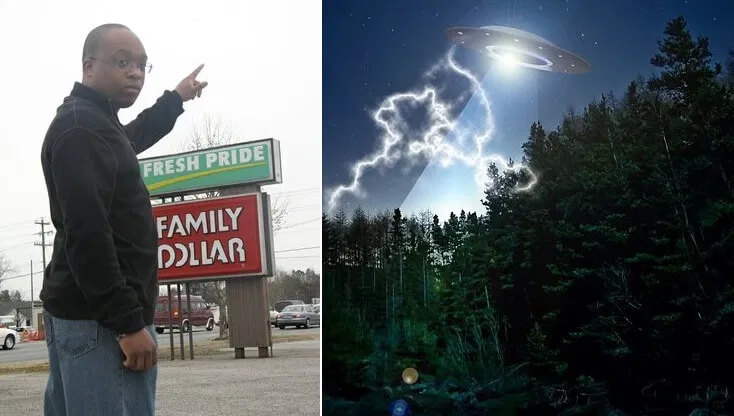 Having accidentally seen a UFO accompanied by military aircraft in the night sky, the former Marine Terrell Copeland could not have imagined that his life would now change forever. Since then, he began to see UFOs regularly, and then they began to abduct him

Many people dream of seeing UFOs or even meeting aliens, not suspecting that in fact, it is very dangerous and that their life can radically change for the worse because of this event.

The Alien Abductions Of Terrell Copeland

The story began in the fall of 2005 and happened with a former US Marine living in the town of Suffolk, Virginia.

African American Terrell Copeland until that moment did not even think about UFOs and other paranormal aspects, he was a very serious, reasonable, hardworking, and practical person, not inclined to practical jokes and not even a fan of “scary stories” around the fire.

But on the night of October 24, his life changed forever. Late in the evening, he was walking in nature, not far from a place called Gloomy Swamp, when he suddenly saw in the night sky a large shining ball, located about 2 miles from him.

The ball hung rather high in the sky, but Copeland could clearly see the military fighters flying back and forth next to him. This scene looked extremely strange and surreal, Copeland looked up, spellbound, until the glowing ball and fighters were out of sight.

Copeland returned to his home, but he could not get out of his head what he saw, he thought about it for three days, and then left the house in the evening and again saw something strange in the sky:

“At that moment I was driving a car near the Fresh Pride grocery center and saw a shining ball hovering over the center. I drove up to the parking lot and was not ready for what I saw. There was an object inside the ball of light and the light was just an illusion. At first I was thought it was just a stealth bomber, but then realized that its stealth is not that great. “

Copeland was able to see that the object was triangular in shape and very massive. The glowing triangle moved slowly across the sky until it was out of sight.

These two observations were just the beginning of a series of strange incidents that Copeland unwittingly witnessed in the years that followed. Since those autumn days, he began to repeatedly observe strange objects in the sky. Often he saw them even just from the window of his house, and if he went somewhere, he saw these objects flying over the lake, hills, or even city dumps.

Copeland began to speculate that perhaps UFOs are using landfills, lakes, and hills as places of hiding, or that there are bases for those who fly on these objects. And then he started trying to photograph or video these UFOs, which led to an even more frightening experience.

Shortly after he began filming UFOs, a mysterious man in military uniform came to his house and told him to delete a fresh video that Copeland had posted on the Internet the day before. But Copeland did not obey and did not delete the video.

The next time he filmed another UFO in the evening from the window of his apartment and immediately posted the video on the network, and then went to bed. A few hours later, he suddenly woke up from an incomprehensible sound and saw that the handle of the front door was moving, as if someone was trying to enter his house.

“The object I shot was a ball of light. Just a big ball of light. It didn’t move. It was solid white. The other ball was right across the street, 300 feet above the ground, and was changing colors very quickly. I thought, ‘This .. . unusual. Something is wrong here. I don’t have to look at this. ”

Waking up from a dream, I heard that someone was trying to break into my apartment. And I loudly asked him: “Who is this?” There was no answer. However, I could still see the doorknob twitch.

I have a firearm, it is kept in my desk. My thought was to get up and check it out. But I couldn’t, I was completely paralyzed. The only thing I could move was my eyes. And then I heard a voice from outside the door: “You don’t need this weapon. We won’t hurt you.”

In the days and nights that followed, Copeland’s life became even stranger. He began to notice that large pieces of memory were disappearing from his memory and he did not remember what he was doing at that time.

In his dreams, some strange creatures began to come to him and for a long time he considered it just a nightmare, but in the end he realized that it was real and that, apparently, he was being kidnapped.

“The first time it happened was on the last Saturday of February 2008. I fell asleep on the couch and woke up in a huge room – it looked like a dining room. There were a lot of tables. Everything was white. People sat at the tables and ate. More precisely, they were creatures that looked like people. They were locked inside the room. I was led in and out of this room through the window. “

These disturbing incidents became more and more frequent, more and more convincing Copeland that he was not just kidnapped, but studied for some purpose. And he still remembered almost nothing of what they did to him. Everything that happened was like a fuzzy, blurry dream for him.

He tried to keep a kind of dream diary, writing down everything he could remember after these strange encounters. Sometimes he managed to remember some snippets:

“I was in the room and saw a woman who did not have completely human features. She had typical large black eyes and an elongated skull. And it struck me a lot. …

Copeland began reading books on UFOlogy and especially studying all about alien abduction. He once traveled 600 miles to come to a UFO seminar, where he met people who had similar experiences. This seminar was attended by about 1,500 people who believed they were victims of alien abduction.

The presence of the former Marine at this meeting brought the History Channel UFO Hunters to the workshop and decided to devote one of the episodes to the history of Terrell Copeland.

Host Bill Byrnes even suggested that the alien attention to Terrell Copeland suggests that he is not just an accidental victim, but a product of hybridization, which has been monitored since childhood.

During the filming of this issue, Copeland was examined by doctors, including taking blood samples from him for analysis. And they discovered that he had an “unknown, rare blood disease.” This was stated in the series, although no details followed.

“I sincerely believe that all preparation for the contact of humanity with an extraterrestrial species. In every culture, from the Aztecs to the Egyptians, it is said about some creatures who came from heaven and gave people some information.

Unfortunately, we don’t look at it the way we should. As people of modern civilization, we think that we are at the pinnacle of development. But this is not the case. They manifest themselves and interfere in human affairs. We need to get off our tall horses. They are going to show themselves. You need to be prepared for this. Do you want a change? Change is coming, “Terrell Copeland said.

1 thought on “The Alien Abductions Of Terrell Copeland, “Change is coming“”