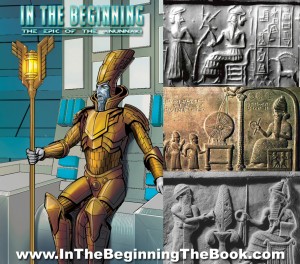 “The Anunnaki (also transcribed as: Anunna, Anunnaku, Ananaki and other variations) are a group of deities in ancient Mesopotamian cultures (i.e. Sumerian, Akkadian, Assyrian, and Babylonian). The name is variously written “da-nuna”, “da-nuna-ke4-ne”, or “da-nun-na”, meaning something to the effect of “those of royal blood” or “princely offspring”. Their relation to the group of gods known as the Igigi is unclear – at times the names are used synonymously but in the Atra-Hasis flood myth the Igigi are the sixth generation of the Gods who have to work for the Anunnaki, rebelling after 40 days and replaced by the creation of humans.” … Zecharia Sitchin attributes the creation of the ancient Sumerian culture to the Anunnaki, which he states was a race of extraterrestrials from a planet beyond Neptune called Nibiru. He believed this hypothetical planet of Nibiru to be in an elongated, elliptical orbit in the Earth’s own Solar System, asserting that Sumerian mythology reflects this view. Sitchin studied the ancient Sumerian language and came up with his own translation for “Anunnaki” as “those who from heaven to Earth came”. By heaven, he means space or beyond the Earth.