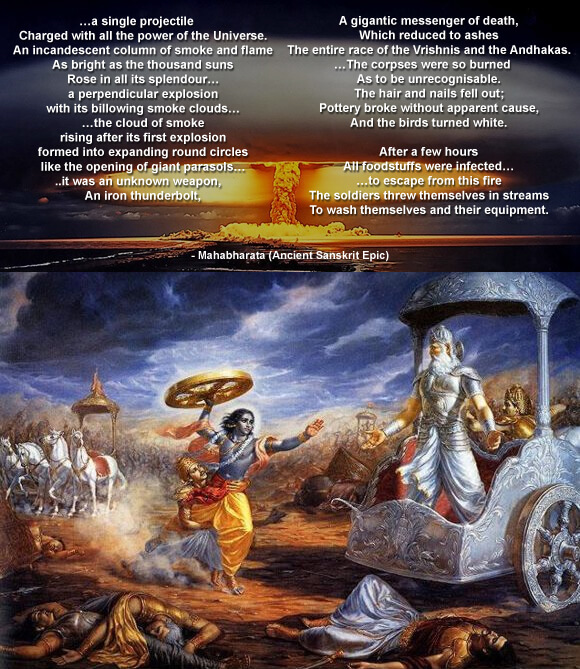 A heavy layer of radioactive ash in Rajasthan, India, covers a three-square mile area, ten miles west of Jodhpur. For some time it has been established that there is a very high rate of birth defects and cancer in the area under construction. The levels of radiation there have registered so high on investigators’ gauges that the Indian government has now cordoned off the region. Scientists have unearthed an ancient city where evidence shows an atomic blast dating back thousands of years, from 8,000 to 12,000 years, destroyed most of the buildings and probably a half-million people. One researcher estimates that the nuclear bomb used was about the size of the ones dropped on Japan in 1945.

Historian Kisari Mohan Ganguli says that Indian sacred writings are full of such descriptions, which sound like an atomic blast as experienced in Hiroshima and Nagasaki. He says references mention fighting sky chariots and final weapons. An ancient battle is described in the Drona Parva, a section of the Mahabharata.”

“…a single projectile
Charged with all the power of the Universe.
An incandescent column of smoke and flame
As bright as the thousand suns
Rose in all its splendour…
a perpendicular explosion
with its billowing smoke clouds…
…the cloud of smoke
rising after its first explosion
formed into expanding round circles
like the opening of giant parasols…

..it was an unknown weapon,
An iron thunderbolt,
A gigantic messenger of death,
Which reduced to ashes
The entire race of the Vrishnis and the Andhakas.
…The corpses were so burned
As to be unrecognisable.
The hair and nails fell out;
Pottery broke without apparent cause,
And the birds turned white.

After a few hours
All foodstuffs were infected…
…to escape from this fire
The soldiers threw themselves in streams
To wash themselves and their equipment.”

1 thought on “Radioactive weapons in Ancient times, as described in the Ancient Sanskrit Mahabharata”