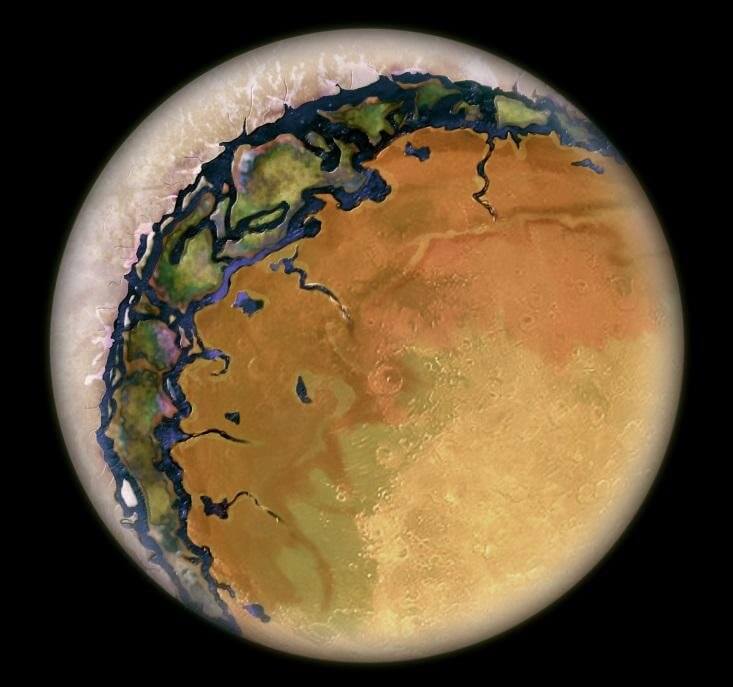 They may not look like much, but there’s a thin ring of life on these unique planets. 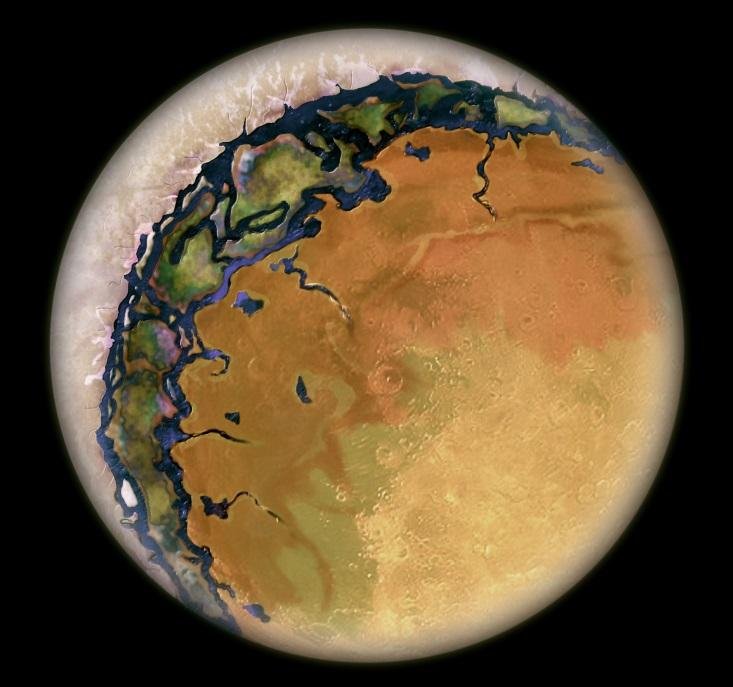 Artist’s conception of a hot Eyeball planet. The permanent day side is sun-baked and dry. The permanent night side is covered with ice. In between lies a thin habitat: the ring of life. Illustration by Beau.TheConsortium.

Imagine a habitable planet orbiting a distant star. You’re probably picturing a variation of Earth. Maybe it’s a little cloudier, or covered in oceans. Maybe the mountains are a little higher. Maybe the trees are red instead of green. Maybe there are scantily clad natives…OK, let’s stop there.

That image may very well be completely off-base. There is good reason to think that the first potentially life-bearing worlds that are now being detected around other stars probably look very different than Earth. Rather, these planets are more likely to look like giant eyeballs whose gaze is forever fixed on their host stars (which is not something I recommend doing with your own eyeballs).

Let’s take a step back. The easiest planets to find are those that orbit close to their stars. The sweet spot for finding a habitable planet—with the same temperature as Earth—is on a much smaller orbit than Earth’s around a star much fainter than the Sun. But there are consequences of having a smaller orbit. A planet close to its star feels strong tides from its star, like the tides Earth feels from the Moon, but much stronger. Strong tides change how a planet spins. Tides drive the planet’s obliquity to zero, meaning that the planet’s equator is perfectly aligned with its orbit. The planet will also be “tidally locked”: It always shows the same side to the star. It looks something like this: 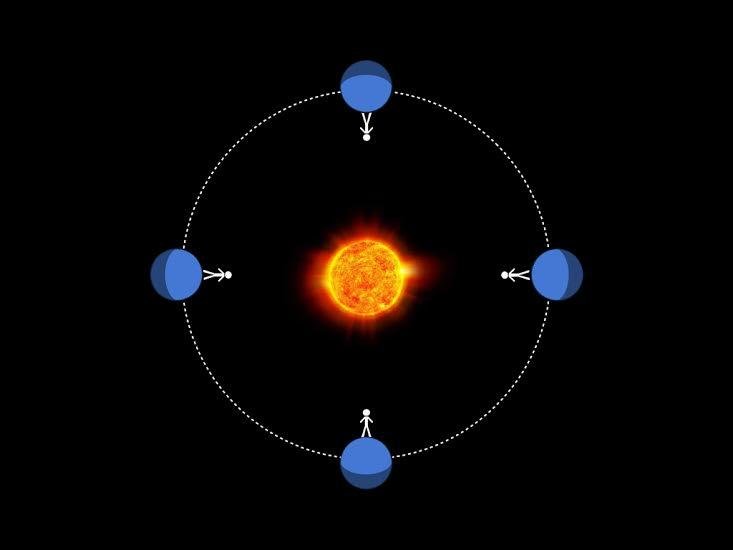 A planet that is tidally “locked” to its star. As the planet orbits the star along the dotted line, the same side of the planet always faces toward the star. The stick figure is standing at the substellar point, where the star is always directly overhead. Image by Sean Raymond.

If you were standing on the surface of a planet like this, the Sun would remain fixed in one spot on the sky. The hemisphere facing the star is in constant daylight and the far hemisphere in constant darkness. In between lies a ring of eternal sunset, quite possibly the most romantic place in the Universe. The hottest part of the planet is the location where the star is directly overhead (the “substellar point” in astro-speak). The hottest part of Earth is spread out across the tropics, depending on the time and the season. But on a tidally locked planet the Sun stays in the same place in the sky and the hot spot never moves. This creates visible differences across the planet’s surface; the relatively small hot spot is the “pupil” of an eyeball planet.

But the story doesn’t end there. When a layer of ice gets thick enough, its bottom layer melts from the pressure. This causes the ice to flow downhill, like glaciers do on Earth. So a hot eyeball planet’s thick night side ice cap spreads out and slowly flows toward the day side. There may be a trickle of water that flows into the light to be evaporated all over again. Our models project that there are characteristic wind patterns that pile clouds up in a specific region on the night side. The planet’s non-uniform appearance can really look like an eyeball. Rivers that flow from the night side to eventually evaporate on the day side might even look like veins.

Where on a hot eyeball planet could you live? It’s a classic Goldilocks story. The day side is roasting and dry. The night side is frigid and icy. In between, it’s just right! The sweet spot—let’s call it the “ring of life”—is at the terminator, the boundary between night and day. The ring of life is bounded by deserts on one side and ice on the other. There is a constant flow of water from the night side to the day side—a series of rivers, all flowing in the same direction. The Sun is fixed in the sky right at the horizon, and the area is in permanent light. Conditions are pretty much the same all the way across the ring of life. One can imagine vegetation following the rivers onto the day side until they dry up, with different ecosystems interspersed along the way. There could be mountains at the edge of the ice sheets, since the ice-covered continents would be heavily weighed down.

Icy eyeballs are also tidally locked to their stars, though their orbits are larger than those of hot eyeball planets, and heat is in short supply. What icy eyeball planets do have is an abundance of water—the night side is covered in ice, and there is enough stellar heating at the substellar point for water to remain liquid. There is essentially a large pond in the midst of a global icy landscape. Below the surface ice, the ocean covers the entire globe. It is similar to Jupiter’s moon Europa, but with a large hole in the ice. 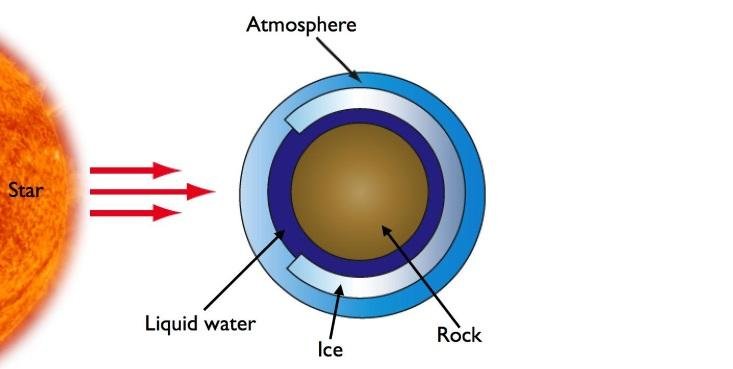 Schematic slice through an icy eyeball planet. The planet’s surface is covered with ice except for a large pond at the substellar point. Adapted from Pierrehumbert (2011, Astrophysical Journal Letters, 726, L8).

Where would you want to live on an icy eyeball planet? Underwater life could exist throughout the subsurface ocean, but surface life that relies on liquid water would need to stay near the pond. Yet the conditions near the substellar point would be extreme: strong stellar irradiation in the midst of barren icy landscape. The best place to live would probably be by the icy shore of the pond, and it would definitely be advantageous to be amphibious (evolution, anyone?).

But there is an inherent danger to living on an icy eyeball planet. If, for some reason, the pond froze over, it would likely never re-melt. Liquid water, being dark, absorbs most of the sunlight that hits it. But solid ice is very reflective. So if a planet’s oceans were to freeze, the amount of energy absorbed from the star would also drop, making the planet even colder. This feedback would push an icy eyeball into a completely ice-covered state from which it might never recover.

Hot eyeball and icy eyeball planets are extreme cases, but any planet that is tidally locked to its star is likely to look very different on its day side and its night side. Differences could come from clouds clustered in certain areas, from preferential melting of ice on the day side or freezing of ice on the night side, or from any number of other possible sources. The galaxy may be littered with wild varieties of eyeball planets! The search for life on other planets will almost certainly start with these worlds.

Sean Raymond is an astronomer studying the formation and evolution of planetary systems. He also blogs at planetplanet.net.