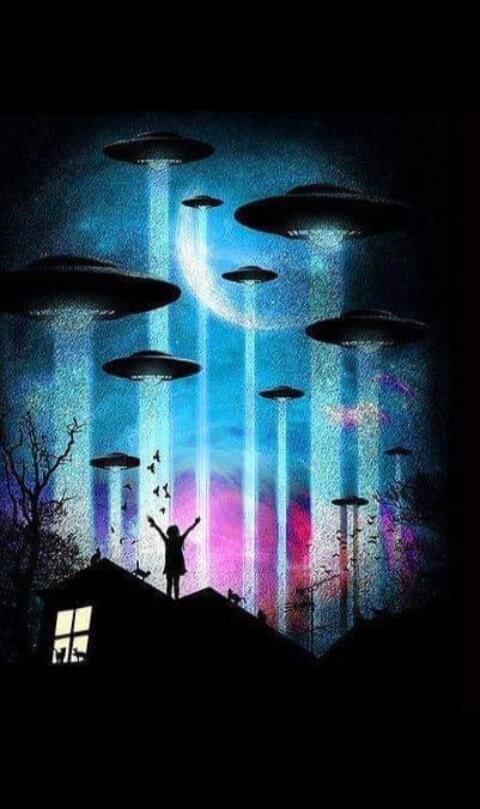 The hard-working staff here at Spoiler Alerts has probably written close to 2,000 columns since coming to The Washington Post. Among those that generated a steady stream of responses was one from 2019 headlined “UFOs exist and everyone needs to adjust to that fact.” That column did not say that aliens have visited Earth. Among the things it did say was that there literally are objects flying around that no one, including U.S. Navy pilots, can identify, and we have to puzzle out what that means.

In the two years since that column appeared, the U.S. government continues to tiptoe toward the normalization of the idea of unidentified flying objects (UFOs). Last year the Department of Defense released three videos (one recorded in 2004 and the other two in 2015) of U.S. Navy pilots seeing something and having no idea what it was. In its news release, the Pentagon said, “the aerial phenomena observed in the videos remain characterized as ‘unidentified,’” putting the U in UFO.

The Pentagon went further in August 2020, announcing the establishment of an Unidentified Aerial Phenomena (UAP) Task Force. Beyond developing a new abbreviation that is less loaded than UFO, the Pentagon explained, “The mission of the task force is to detect, analyze and catalog UAPs that could potentially pose a threat to U.S. national security.”

Then, 10 days ago, former director of national intelligence John Ratcliffe went on Fox News and made a whole bunch of claims about what the U.S. intelligence community knew about UAPs, including that a Pentagon report would soon be released revealing even more information. According to the New York Post’s Tamar Lapin and Jackie Salo:

“There are a lot more sightings than have been made public,” he told host Maria Bartiromo. “Some of those have been declassified.”
“And when we talk about sightings,” Ratcliffe continued, “we are talking about objects that have been seen by Navy or Air Force pilots, or have been picked up by satellite imagery that frankly engage in actions that are difficult to explain.”
“Movements that are hard to replicate that we don’t have the technology for. Or traveling at speeds that exceed the sound barrier without a sonic boom.”

Still, it would appear that in June there will be an official U.S. government report acknowledging the existence of UFOs or UAPs or whatever you want to call them.

It is increasingly respectable to acknowledge that unidentified aerial phenomena are a thing. But this leads to a few follow-up questions. Does this evidence point toward the prospect of extraterrestrial observation of our planet? If so, how should we feel about that?

I am not going to speculate on the first question beyond noting that if Harvard astrophysicists are making that suggestion about interstellar phenomena, perhaps we need at least to consider the possibility that these UAPs might also be extraterrestrial in origin

The more interesting question is how we should respond to this. There has been increasing apprehension on the part of some very smart people about contacting extraterrestrials. In 2010, Stephen Hawking told the Discovery Channel, “If aliens visit us, the outcome would be much as when Columbus landed in America, which didn’t turn out well for the Native Americans.” Similarly, physicist Mark Buchanan argued in 2016, “Any civilization detecting our presence is likely to be technologically very advanced, and may not be disposed to treat us nicely. At the very least, the idea seems morally questionable.”

That is promising! Observation without the intent to destroy suggests a civilization that is much less violent than, say, Spanish conquistadors.

Furthermore, it might be better for U.S. national security if these UAPs turn out to be ETs. Sen. Marco Rubio (R-Fla.) told the New York Post, “Frankly, that if it’s something from outside this planet — that might actually be better than the fact that we’ve seen some technological leap on behalf of the Chinese or the Russians or some other adversary that allows them to conduct this activity.”

I get the concern from physicists that technologically advanced extraterrestrials might behave as powerful human civilizations have in the past. But maybe the concerned physicists should engage a little more with social scientists. The assumption is that powerful, technologically advanced civilizations will act in a destructive manner. That is possible, but perhaps civilizations that reward destructive entrepreneurship are less likely to generate the technological wherewithal for interstellar travel. And if those UAPs are ETs, maybe there is more hope for interstellar relations than either scientists or science fiction envision.