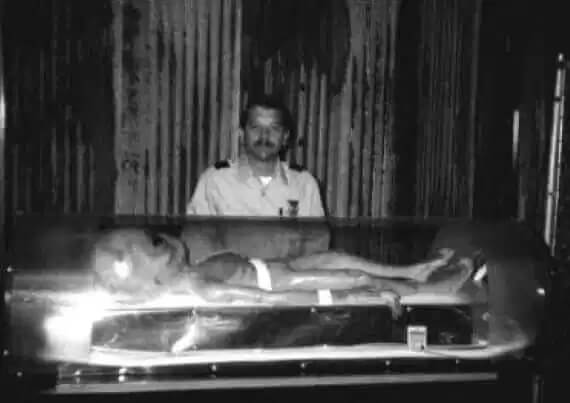 It is not for the first time when someone in power shares the story where he/she either encountered UFO or was abducted by aliens. Roswell UFO crash started a lot of alien conspiracies, but do you know that many years before that incident, dead alien bodies had been stored in a container in the basements of the Capitol Building, Washington DC.

This story first came into the limelight in 2002, when Willian Jones, a director of the Ohio branch of MUFON received an interesting letter from a woman named Lucile Andrew, the daughter of Reverend Turner Hamilton Holt. The letter held the top-secret information told by Holt to his daughter about one of his meetings with his cousin Cordell Hull who had been the US Secretary of state from 1933 to 1944 and was also elected as US Senator from 1931 to 1937. He had also received the Nobel Peace Prize and was one of the people who established the United Nations.

The letter contained the information that Hull would never want to come out until he was alive but at the same time, he could not stop himself sharing it with his cousin Holt who served at the Shenandoah Christian Church in Greenwich, Ohio.

According to the letter, one day when Holt was in Washington D.C., he was contacted by Hull who wanted to show him something extremely secret and asked him to never disclose it to anybody. Holt agreed, and Hull took him to a place under the Capitol Building where he showed him an amazing sight. There is no exact information about the time-frame of this secret but Hull served under the presidency of Franklin D. Roosevelt until his resignation in 1944.

It was a huge room with four glass containers. In each container, there were bodies of dead humanoids in a special liquid (presumably formaldehyde), about which Holt and Hull had no idea. According to the description of their body structure, they were clearly not humans. There also was a “wrecked round craft” in the adjoining room.

“My father wanted my sister and I to make this information known long after he and Cordell were dead, because he felt it was a very important bit of information,” Lucile wrote. “We have researched your group (MUFON) and feel it is the most reliable group in the country. We hope that you will research and search this information. The jars with creatures in formaldehyde and the wrecked craft are somewhere!

Cordell said they were afraid that they would start a panic if the public found out about it. Sincerely, Lucile Andrew, Ashland, Ohio.”

The letter said that incident happened in 1939, years before the stories of UFOs and alien encounters hit the newspapers. There is no doubt that Cordell Hull was one of the greatest politicians in US history and according to his credibility, it is difficult not to believe his story. Holt married a woman named Vina May Clark and they both had three daughters. Two daughters claimed that Holt had told them about the creatures but he had never said from where they came from. “He said the color of this material wasn’t a color that he had seen before, but for the lack of a better word he used “silver.” Reverend Holt was not the sort of person to make up such a wild story and, the sisters feel that by telling the story they are following their father’s wishes.”

Below is the video where two sisters from Ohio tell the story of how their father was taken to the sub-basement of the capitol and shown what appears to have been alien bodies and a craft.

Barbara A. Wolanin, the curator U.S. Capitol building said: “She had never heard about these creatures being stored at the Capitol, but she did confirm there was a sub-basement that was divided into storage rooms back then.”

When Hull left his job, he wrote his memoirs, but there is no mentioning of this story in his papers in the Library of Congres. Maybe we will never know the truth of this event, but there are lots of conspiracies about the strongest people in US history and their links with the aliens. Perhaps, the most interesting and confirmed set in high positions is the case of contact between US President Dwight Eisenhower and the extraterrestrials. These meetings are confirmed by the statements of Philip Schneider, a civil engineer, and geologist; partial information was also provided by Gerald Light, head of the research fund. Sometimes, UFO enthusiasts also link the death of John F. Kennedy with UFOs. On the other hand, there are people who deny such stories and call them fake or fantasy.