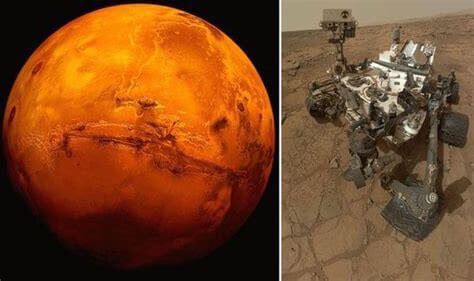 The marks on Mars, canals, valleys, and canyons, were first detected by telescope in 1877 by Italian astronomer Giovanni Schiaparelli. He called them “canali,” and his discovery suggested a possibility of life on Mars. However—let’s set the record straight—canals were not dug by intelligent life on Mars!! That theory fed the Martian craze that swept over the 20th century with help from science enthusiasts like Percival, Lowell and Tesla. Over a hundred years later, Mars Rover, NASA’s exploration bot, found evidence of a dry creek. Yes. The surface of Mars once flowed with water.

A few years later, NASA’s Mars Reconnaissance Orbiter found actual water! “This is a significant development, as it appears to confirm that water—albeit briny—is flowing today on the surface of Mars,” said John Grunsfeld, astronaut and associate administrator of NASA’s Science Mission Directorate in Washington. To be clear, neither of NASA’s bots have detected Martian civilizations.