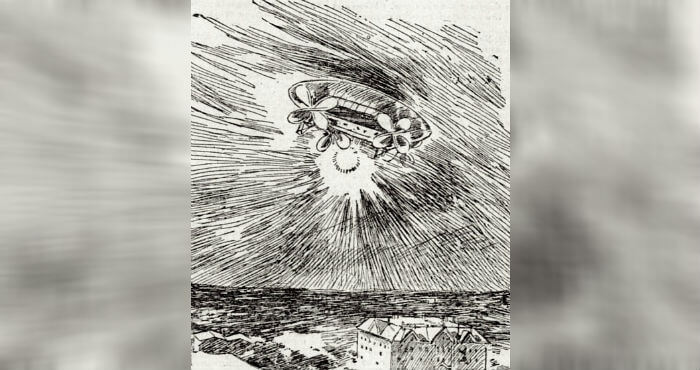 Colonel Shaw reached his hand out and touched one of the strange beings, which warbled instead of speaking. They were silky soft to the touch. Very tall and slender, the Martians stood 7 feet high. When Shaw touched one of the beings, it was so light he lifted it with little effort, saying, “I should judge that the specific gravity of the creature was less than an ounce.”

At this point, one of the creatures attempted to abduct Shaw after it received a signal from its leader. Unable to lift the human, even with the three aliens working together, they gave up and headed back to their ship. Shaw described their retreat as “not as you or I walk, but with a swaying motion, their feet only touching the ground at intervals of about fifteen feet.” And off they went, levitating with a springing motion into their ship, it quickly whisked them away. Colonel Shaw’s final analysis: “I have a theory, which, of course, is only a theory, that those we beheld were inhabitants of Mars, who have been sent to the Earth for the purpose of securing one of its inhabitants.”