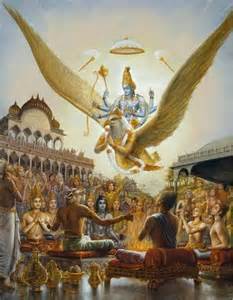 Considering the timings and the conditions in which Lord Krishna was born to Devaki and Vasudeva brought an infinite number of questions into the picture.

Devaki had a brother who loved her dearly but wanted not only to be invincible but also immortal.

A prophecy was made soon after he married off his beloved sister, that the child of Devaki would be the death of him. Fearing death, Kansa killed six of Devaki’s children soon after they were born.
However, ahead of the birth of the 7th child, the divine power intervened. Krishna was born to Devaki but was raised by Yashoda.
Krishna was not born to human beings, as when he was born, both Vasudeva and Devaki were tied to the opposite end of the jail, resulting in failure of consummating their marriage.
When Lord Krishna was born, it was pitch dark at night and an unusual, unexplained atmospheric turbulence occurred. Heavy rains were witnessed and water bodies were swelled, a torrential downpour took place.
Regarding all the unusual atmospheric turbulence which happened could possibly because of the entrance of an unknown flying object into the earth’s atmosphere to plant a mighty seed, Krishna.

As there were colossal numbers of guards to keep an eye on Devaki and Vasudeva, how they all could possibly sleep at the same time, proving a chance to Vasudeva to escape from the jail .
A force could have put them all to sleep, as Krishna must have landed at the wrong place and he should be needed to shift at a safer place.
Vasudeva put Krishna into a basket and begin to cross Yamuna river, though the water body was still swollen and overflooding, When Krishna was being taken via the river, an unnatural force, probably cut the river into half and paved a way for Vasudeva to take him to Gokul.
To protect him from the thunders, lightning, and heavy rains, the Purana says that Lord Shesh Naag, the serpent God, opened his fangs and the light from his eyes guided Vasudeva. Was this an allegory? Did the spacecraft hover atop and provide cover from the rain and beam light for Vasudeva to walk through the river?

Lord Krishna and many other Hindu Gods have strange mix of blue and grey color which is very unusual and unexplained which again leads a question if he were indeed an alien?

He had supernatural powers, once Yashoda, his foster mother, asked him to open his mouth as he used to eat mud, he showed her a glimpse of the whole universe inside his mouth, probably indicating where he comes from.
He was so powerful that he could lift mountains on his little finger and could control nature. This could be the reason why he never used his powers in wars, as he considered it a battle between unequal.

During the Mahabharat battle, he may have told his dear friend Arjuna about the place where he came from.
Lord krishna told him that an ordinary pair of eyes cannot see the real manifestation of him. Only a divine pair of eyes could see the real him. So he gave Arjuna a ” Divya chaksusha or divine eyes” which can actually be a telescope which enabled Arjuna to see the whole universe, the real origin place of Krishna.
While his birth is comprehensive, his end is not much detailed. If he was struck with an arrow, where was he buried. May be, he was programmed to walk on earth for approximately 120 years, and then self disintegrate, not leave any trace or physical evidence.
Even the prophecy,’ or voice from the sky, that announced Kamsa’s end probably came from a pilot vehicle that preceded the spacecraft that dropped a `power’ that ultimately grew up to be Krishna.

These are random thoughts and don’t intend to hurt the sentiments of any religion or a person. He was indeed a supreme power, an incarnation or an alien, that remains a mystery.