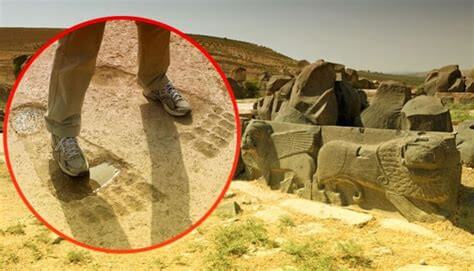 The impressive temple of Ain Dara, which is located northwest of Aleppo, in Syria, is decorated with three Ain Dara’s Giant Footprints that have recently gone viral on the Net.

Its meaning remains a mystery to scholars. There is said to be evidence that Giants once roamed the entire Earth.
What many consider to be just a myth is for many researchers and authors the evidence that different species – one of much larger proportions – existed on Earth in the distant past.

Perhaps these gigantic beings were once misinterpreted as gods.

Ain Dara is a small town located northwest of Aleppo, Syria, known for some notable structures, including the Ain Dara Temple, which is located just west of the town.
The temple was discovered by chance in 1955, when a colossal basalt lion was found.

As a result of the find, the excavations were carried out in the following years revealing fascinating pieces of history.
The Ain Dara temple is believed to date back to the Syrian-Hittite culture in the Iron Age.
The Syrian-Hittites or Neo-Hittites were a group of political entities that emerged at the end of the second millennium BC, after the fall of the Hittite empire.

The Syrian-Hittite states filled a political vacuum and became the dominant power in the region until its conquest by the Neo-Assyrian Empire in the late 8th century BC.

With the numerous discoveries that have been made in Ain Dara, experts still do not know what divinity this temple was dedicated to and the multitude of sculptures and bas-reliefs that adorn the walls of the site make it extremely difficult for academics to come up with an explanation.
However, even before you have a chance to catch a glimpse of the temple’s inner beauties there is plenty to see.

Upon arrival, before entering the temple, there are a pair of gigantic bare footprints – supposedly carved into the stone floor – that have taken experts and tourists by surprise.

Interestingly, there is another third giant footprint not far from the first two carvings on the ground.
So why did they carve those gigantic footprints, and why three? Whose prints were these? Were they representations of the gods? Were they placed there for aesthetic reasons? Or are they evidence of something much more shocking?
What these gigantic footprints are supposed to represent is still unknown.

Some scholars have suggested that they are actually animal prints, while others believe they represent the footprints of the gods.
Perhaps these gigantic markings, measuring approximately one meter in length, were intended to be an iconic representation of the gods.
The footprints may have been carved to illustrate the presence of a local deity entering the temple and approaching the throne in the inner sanctuary.
There are some archaeologists who speculate that the massive footprints may have belonged to one of the gods worshiped in the temple as there are numerous sculptures of Ishtar and illustrations of the ancient Sumerian storm god Baal Haddad adorn the walls.
They are depicted wearing shoes with curled toes.

Other authors believe that there is a completely different explanation and these footprints, like many others found around the globe, are a reminder of a distant time when the gods walked on Earth, shaking the entire planet under their gigantic feet.
Furthermore, another interesting feature of the Ain Dara temple is its similarity to the biblical description of the Temple of Solomon in Jerusalem. These two temples have been said to be similar in size and decoration.

Before jumping to the conclusion that one temple influenced the other, it should be mentioned that there are also temples in that region that are comparable to the temple of Ain Dara and the Temple of Solomon.
These temples are Ebla, Emar and Munbaqa. Therefore, it can be suggested that these temples belonged to a broader cultural tradition, which dominated the region during that time.

Curiously, Mesopotamia is well known for being the cradle of civilization and the birthplace of one of the largest mythological stories on the planet, so finding curious and inexplicable discoveries like massive footprints is something you would expect to find in the area.
The mythology of the surrounding area certainly suggests a time when giants, demigods, and gods roamed the Earth leaving their mark behind.