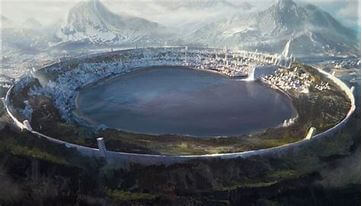 The word Hyperboreans comes from ancient Greek and means “beyond the North Wind or the North Pole-“. In this fabulous kingdom of eternal spring, the sun shone 24 hours a day, but it was practically impossible to get there because this region was protected by huge transparent ice walls.

The word Hyperboreans comes from ancient Greek and means “beyond the North Wind or the North Pole-“.

In this fabulous kingdom of eternal spring, the sun shone 24 hours a day, but it was practically impossible to get there because this region was protected by huge transparent ice walls.

Nor could it be accessed by conventional means of transport, since this enigmatic “paradise” was guarded by powerful races of demigods called Hyperboreans.

This civilization has been described in many cultures as very tall beings, with blue, blond eyes and very white skin, having a very well developed and organized society.

One of their many talents is the arts, as well as science. Its inhabitants live in a state of permanent light and love, in fact, it is a race that has always lived free from war.

Here the concept of work used to be second to none. Its genetics do not know old age or disease. They are highly psychic beings.

Another part of Greek history connects the Hyperboreans with the foundation of several important religious sanctuaries in ancient Greece, and it is also said in their writings that the planet is connected by tunnels all over the interior of our planet.

Different cultures from all over the world agree in their ancient writings that all humanity has its origin from the Hyperboreans.

This ancient breed has the same origin as the Atlantean and Lemurian, of extraterrestrial origin. It is said that even today a part of this civilization remains hidden inside the planet.

Scientists have confirmed that there are openings in the poles and that they might be serving as entrances to a hidden world, and given this theory, the ancient Greek legend would make sense.

Some researchers say that the Hyperboreans lived together with other races such as the Atlanteans and Lemurians for a while, being their most intense relationship with the Atlanteans and they exchanged part of their science and astronomy.

Hyperboreans and their existence

In the first place, it must be remembered that this region, as well as the two “lost” continents, have not ceased to exist even though they were submerged to the bottom of the oceans

And there is already speculation about the possibility that at some point in the history of mankind these continents may re-emerge to the surface.

On the other hand, not all Hyperboreans disappeared in the great catastrophe, a part of their society was safe from the impending destruction of their civilization.

This happened before the two continents -Lemuria and Atlantida- and the Hyperboreal region were swallowed by the waters by a change in the position of the Earth’s axis.

For a while, they prepared their emigration to the interior of the planet, one of those places is Mount Shasta in California.

And another part of these descendants, over time, in the course of our history of mankind came to the surface and adapted to different parts of the world migrating to more southern lands.

And mixing with other ethnic groups and inhabitants of different regions of the planet, such as Iceland and Europe, as well as Himalayan lands, or the American continent, contributing knowledge in mathematics, astronomy, etc.

An ancient Tibetan tradition says that:

“The White Island (Hyperborea) is the only place that escaped the general destiny of all the continents after the catastrophe. It cannot be destroyed by water or fire since it is the Eternal Earth. ”