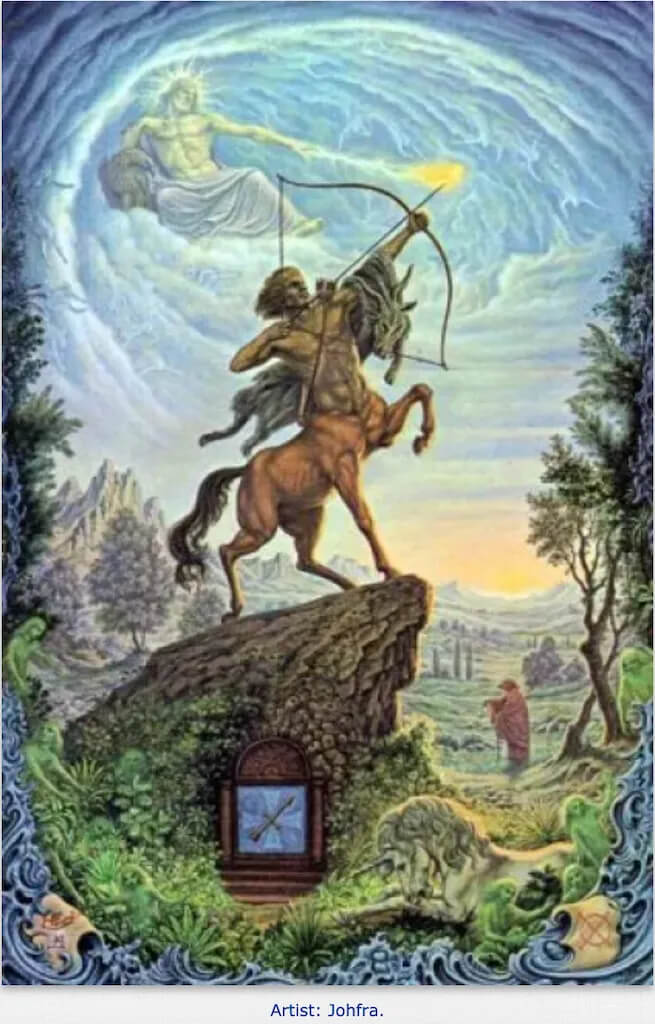 While I, ever the eternal optimistic double Sagittarian, see the coming Aquarian Age in terms of positive Aquarian qualities — decentralization, horizontal networking, innovation, experimentation, cooperative groups of fully expressive Leo individuals — there is a much darker side to Aquarius, and unfortunately, there is no getting around it.

This long essay by the founder of the World Economic Forum offers an example, and indicates the central role societal changes wrought by the long-planned, and now ongoing so-called Covid crisis plays in bringing in the larger technofascist, transhumanist globalist agenda.

Reading through his Fourth Industrial Revolution screed, I began to wonder about Schwab’s astrology (a four-planet stellium in pioneering Aries) and searching for it, found this, esotericastrologer.org, an amazing website that I have never seen before, with a new article on Sagittarius that places even Schwab’s gigantic vision in expanded perspective.

BTW: Given that the sun is now moving through Sagittarius, it’s the time of year for us to concentrate on and absorb big visions, especially now, when the 1% is diabolically using the New Normal imposed by so-called Covid-19 in its penultimate attempt to foist the New World Order on We the People of the 99%.

No wonder this 2020 election is so historically significant! Remember, when Donald Trump says America First and Make America Great Again he is signaling that every nation, not just ours, needs to retain and enhance its sovereign status. That only if nations are sovereign can we even begin to defeat the globalist New World Order.

Everyone agrees that The Age of Aquarius actually begins at the Winter Solstice, December 21, 2020, when Jupiter and Saturn meet at 0° Aquarius. I’ve seen differing views of just how rare this is. For example:

The Great Conjunction of Jupiter and Saturn in Aquarius

Astrodienst offers another perspective, noting in their newsletter that “the [every 19- 20 year] conjunctions of Saturn and Jupiter always occur in the same element for about 200 years. In the cycle now coming to an end, it was the element earth. With the Great Conjunction in Aquarius, we are at the very beginning of a cycle in the element Air, and thus at the beginning of a significant shift in the collective orientation. Knowledge, communication, and ideals will shape the next two centuries more than material possessions . . .”

Hmmm. so that’s what arch globalist Schwab means, when he says you’ll own nothing and you’ll be happy”?