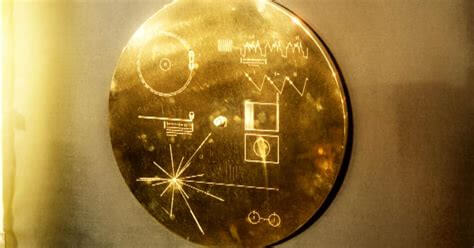 3/31/2021
The Voyager 1 and 2 probes have been on a journey through space for more than 40 years. Launched in 1977, they are now well beyond Pluto’s orbit. In 2012, Voyager 1 entered interstellar space and is now the most distant human-made object from the Earth. Voyager 2 entered interstellar space in November 2018. Both spacecraft carry an identical message from Earth for any extraterrestrial beings who happen to find them, the Voyager golden record. These spacecraft are still gathering and transmitting scientific information through the Deep Space Network, allowing scientists to learn more about this unexplored region.

Voyager 1 and 2, like Pioneer 10 and 11 before them, inspired hope for extraterrestrial communication. What if someday in the distant future, these remarkable things sent to space were found by extraterrestrial spacefarers? Visionary team members of these deep space missions felt that it was important to communicate the story of humanity. To this end, Pioneers 10 and 11 carried small metal plaques basically describing their place of origin in the Milky Way galaxy.

The Voyager golden record was more ambitious, intended to encapsulate the essence of humanity as a kind of time capsule. Each record is a 12-inch gold-plated copper disk, encased in a protective aluminum cover. Each includes a phonograph cartridge and a needle, along with instructions in symbolic language on how to play the record. Each Voyager golden record contains 115 images encoded in analog form as well as a variety of sounds designed to describe the life and culture of planet Earth to extraterrestrials. Natural sounds are included, such as those made by wind, thunder and a variety of animals. Also included is a wide selection of music from different human eras and cultures and spoken greetings from people in 55 languages. Finally, the record includes printed messages from former U.S. President Jimmy Carter and Kurt Waldheim, United Nations Secretary-General from 1972 to 1981.

The initiative to create the Voyager golden records was led by astronomer Dr. Carl Sagan of Cornell University. According to the New Yorker, in 1976, Sagan was visiting with his friends, science writers Timothy Ferris and Ann Druyan. Sagan was enthusiastic about the idea of communication with intelligent extraterrestrials and had helped design the plaques for the Pioneer 10 and 11 spacecraft. He asked Ferris and Druyan to help him create something better for Voyager. As Ferris recalled, “We immediately agreed. Soon, he [Sagan] and one of his colleagues at Cornell, Frank Drake, had decided on a record. By the time NASA approved the idea, we had less than six months to put it together, so we had to move fast.”

What Will Extraterrestrials Make of This?

We simply don’t know enough about our universe to determine if extraterrestrials exist. If they do, what is the probability that they will find Voyager golden records? Will they figure out how to access the content? The symbolic instructions are mostly technical in nature, and an advanced space faring civilization might well be able to meet this challenge. Interpretation of the content is another matter entirely. Even if they do gain access, will they have any understanding of what they have found? No matter how hard we try to put ourselves in alien shoes (do they wear shoes?), it’s difficult to think beyond our own human-centric viewpoint.

There are those who argue that the Voyager golden record message of human cultural diversity will be confusing rather than explanatory. Rebecca Orchard and Sheri Wells-Jensen at Bowling Green State University in Ohio studied the content and considered how intelligent extraterrestrial beings might misinterpret it. For example, the records contain images and sounds that are not correlated. If extraterrestrials tried to match the sounds with objects in the images, human culture might appear to be very strange. “What if you pair the image of an open daffodil with the roar of a chainsaw?” asked Orchard.

Even if they are unable to understand the message, the fact that these records were included on these interstellar spacecraft is a message in itself: Humans are explorers, and we’ve done our best to tell the universe who we are. As Carl Sagan noted, “The spacecraft will be encountered and the record played only if there are advanced space faring civilizations in interstellar space. But the launching of this bottle into the cosmic ocean says something very hopeful about life on this planet.”

You can keep track of these spacecraft at JPL’s Voyager Mission Status page. Voyager 1 is now about 13.5 billion miles from Earth, Voyager 2 about 11.2 billion miles. They have traveled beyond the heliopause, the theoretical boundary where the sun’s solar wind is stopped by the interstellar medium, and have reached what is considered to be interstellar space.

The Road Less Traveled: Where Are They Going?

It will be quite a while before the Voyager spacecraft make a close approach to any other planetary system. Voyager 1 is leaving the solar system at a speed of approximately 325 million miles per year, heading toward the constellation Ophiuchus. In about 38,200 years, it will pass within 1.7 light-years of a star called AC+79 3888 in the constellation Ursa Minor. Voyager 2 is moving at a speed of about 288 million miles per year, toward the constellations of Sagittarius and Pavo. In about 40,000 years, it will pass within about 1.7 light-years of a star named Ross 248, a small star in the Andromeda constellation.

Will we eventually lose track of the Voyagers? Each spacecraft is equipped with a radioisotope thermoelectric generator (RTG), which puts out 4 fewer watts of electrical power each year as its plutonium fuel decays. The Voyager team prioritizes which instruments to keep on as the available power diminishes. Both spacecrafts are expected to continue operating with at least one science instrument until around 2025. They will remain in range of the Deep Space Network through about 2036. After that, the available power to transmit a signal back to Earth will fade away, and these magnificent lonely wanderers will disappear from observable human experience.