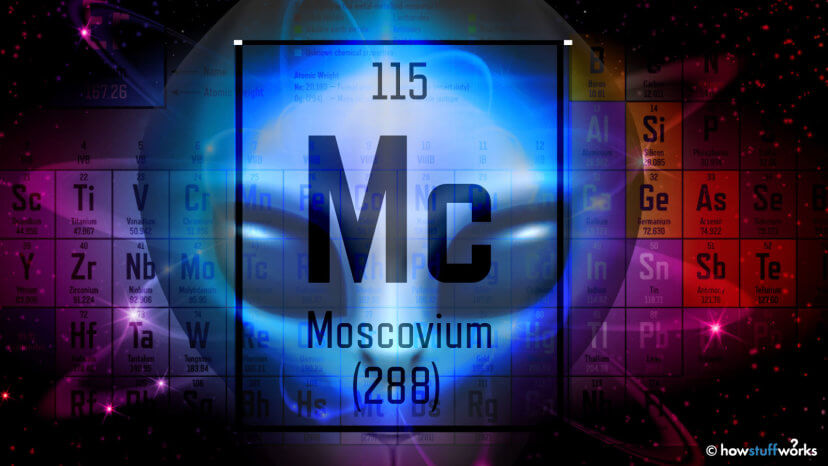 Does element 115 (moscovium) have anything to do with powering alien spaceships?

Element 115 is an enigma of sorts. It was only added to the periodic table in 2016, yet for decades it has attracted extra attention because of a supposed connection to extraterrestrial technology and alien lifeforms.

Intrigued? Before we answer whether there is a connection, let’s find out what element 115 really is.

“Element 115, or moscovium, is a man-made, super-heavy element that has 115 protons in its nucleus,” emails Jacklyn Gates, a scientist with the Heavy Elements Group in the Nuclear Science Division for Berkeley Lab in California. (As with all elements on the periodic table, the element’s number corresponds to the number of protons in the nucleus of the element’s atom.) “That is 23 more protons than the heaviest element that you can find in large quantities on Earth, uranium.”

Gates says that element 115 is an extremely rare element that’s made one atom at a time in particle accelerators. It exists for just a fraction of a second before it decays into another element.

“It is special because it is near a predicted ‘island of stability’ where some super-heavy nuclei might have much longer lifetimes. Instead of living for less than a second, they could exist for minutes, days or even years! That is long enough that we might be able to use them for practical applications,” she says.

Element 115 was discovered in 2003 in Dubna, Russia at the Flerov Laboratory for Nuclear Reactions by a group of scientists led by nuclear physicist Yuri Oganessian. The element was eventually named moscovium because Dubna is in Moscow.

To make this element, the scientists accelerated ions of calcium-48 (48Ca) to around 10 percent of the speed of light and then bombarded americium-243 (243Am) with them. Through this bombardment, they were able to successfully fuse the nuclei of 243Am and 48Ca atoms, says Gates. “To create a super-heavy element, you need the complete fusion of two lighter elements,” she notes. This process produced four atoms of moscovium.

“The new element that they made had 115 protons (20 from the 48Ca and 95 from the 243Am),” she says. “This new element was then separated from all the other reaction products using the Dubna gas-filled recoil separator and then implanted into a detector where scientists were able to watch element 115 decay into element 113.”

It took years for researchers to work out some of the details about moscovium. It wasn’t until 2018 that Berkley Lab scientists figured out that the element’s mass or atomic weight (the total number of protons and neutrons in an atom) was 288.

To nab this vital number, they repeated the process that the first discoverers used to pin down the element. In doing so, they managed to produce roughly one atom of moscovium per day, and that atom was captured by an instrument called FIONA (For the Identification Of Nuclide A), which to the untrained eye looks like a small metal bank vault. So far, moscovium doesn’t have a practical use outside of scientific study.

Element 115 and the Alien Connection

Element 115 was only discovered in 2003, but it may sound familiar because the name has been around for decades in connection with UFOs, aliens and other related phenomena.

We’re referring to the long-lived story of Robert (“Bob”) Scott Lazar, who in 1989 went public with what he said was top-secret information about element 115. Lazar claimed to be a former employee at Area 51, the famous (and highly classified) area of the Nevada Test and Training Range operated by the United States Air Force, where his job was to reverse-engineer crashed alien flying saucers. He said that he’d personally worked with element 115, which was used to pilot alien spacecraft.

It is “impossible to synthesize an element that heavy here on Earth. … The substance has to come from a place where super-heavy elements could have been produced naturally,” Lazar said.

Lazar claimed that he’d seen evidence of anti-gravity propulsion technologies, and nine alien spacecraft stored in a hangar at Area 51. Those spaceships ostensibly used some sort of propulsion system that harnessed the inherent power of gravity, and thus utilized the characteristics of element 115 to work their technological wizardry.

The government doesn’t confirm the employment of anyone who’s worked at Area 51. And as some sources have pointed out, the gist of his claims have never been thoroughly disproved.

Yet, there is still the fundamental science contradicting his claims.

“No, there is no connection between this discovery and the claims of Bob Lazar,” says Gates. “Presently, all the created atoms of element 115 have decayed way too fast to be used to fuel UFOs!”

So instead of the excitement about little green men and incredible spacecraft, we’re left with real, tangible — and equally thrilling — science. For the people who are immersed in these advances on a daily basis, that’s more than enough. After all, moscovium is an amazing element. Gates says that it is a sign that we’re pushing the boundaries of what we know about the universe.

“Element 115 is special in that we can make it easier than some lighter elements like element 112 or element 113. Typically, as we add more protons, it becomes harder to make a new element. This trend is broken around element 115. Due to this, we have been able to make over 100 atoms of element 115 and begin to understand its nuclear and chemical properties,” she says.

Virginia Trimble is a physics and astronomy professor at the University of California Irvine who also finds element 115 exciting.

“As ‘discovery space’ advances into heavier and heavier nuclides, their properties provide stronger and stronger tests of our basic physical understanding — they don’t always decay in the expected patterns, and where more than a few atoms can be produced at once, they don’t always have the chemical properties that you would expect from their position in the periodic table,” Trimble says via email.

Editor’s note: After this story was published, we heard from Jeremy Kenyon Lockyer Corbell who directed the documentary “Bob Lazar: Area 51 & Flying Saucers” and is very familiar with Lazar. Corbell emailed us some additional information about Lazar and element 115 that we’ve excerpted here: “When Lazar first came forward in 1989, he made a point to explain that there’s no reason a version of element 115 couldn’t be synthesized and observed at some point in the future. In fact — he predicted that it would be observed (as did many) — just likely not in a stabilized form (because of the statistical improbability of landing on a relevant isotope). … The [isotope discovered in 2003] is not the isotope that would account for what Lazar has described having had access to while working at Area 51 (Site 4). Lazar reports that the 115 he had access to was far more stable.

“My understanding of Lazar’s thinking is that with the advances in bombardment techniques new isotopic combinations would be achieved. However — just like how gold has 37 different isotopes and only one isotope is stable — 115 is suspected to have MOSTLY rapid decay isotopes… So hopefully in the future we will land on a version with a longer half-life — even if it just ends up being a few atoms of it. That would be cool — and one day will likely happen,” Corbell says.

Elements have been discovered roughly every three years — until recently. Now, researchers must pump more technology (and money) into projects that may or may not generate fleeting atoms of newfangled elements. One lab in Russia — the Flerov Laboratory of Nuclear Reactions — hunts relentlessly for new elements, in hope of expanding our understanding of the universe. In the past 50 years, the lab has discovered nine new elements.

The name of Element 115 is moscovium.

Has element 115 been discovered?

What would element 115 be used for?

According to the Royal Society of Chemistry, Element 115 is only used for research.

Element 115 is a man-made, super-heavy element that has 115 protons in its nucleus. The element is made one atom at a time in particle accelerators and exists for just a fraction of a second before it decays into another element.

Is there a stable isotope of element 115?

According to Live Science, Element 115 has four isotopes. The most stable isotope is moscovium-290, which has a half-life of 220 milliseconds.