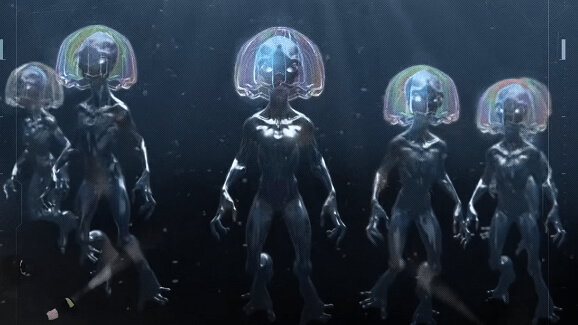 The most mysterious place on Earth is the deepest part of the ocean, which is still unexplored. Humankind knows more about deep space than oceans, that is why there could be the best hideout for extraterrestrials. There are many accounts of spotting underwater UFOs, but Luis Lamar’s case is the most intriguing event of an alien encounter underwater.

Luis Lamar is best known for his underwater photography and worked on more than hundreds of projects with Nat Geo and OceanX. His popular works are Welcome to Earth, Secrets of the Whales, and One Strange Rock.

In 2019, Lamar said in a video that he had encountered intelligent beings more advanced than humans in the ocean. During that time, he was working on an underwater project for OceanX, an ocean exploration initiative which mission is to explore the ocean and bring it back to the world.

Lamar said: “I’ve seen giant deep-sea arachnids, venomous sea snakes far offshore with, like bright-yellow heads. Sharks in a frenzy, Orcas swarming all around me. Some sort of you know, hyper-advanced aquatic alien creatures inhabiting the shallow waters, which almost look like stingrays.”

This particular case was reported by International Business Times, an American online news publication but later it was removed by its editorial team. It is said the original video was made by The War Zone which is famous for in-depth information on advanced military aircraft and exclusive reports on UFOs.

On Aug 3, a Twitter user @sSamscwantch shared a screenshot where Luis Lamar replied to his question about his encounter with underwater aliens. Lamar said it was a joke and they made it for Instagram kids. Some people find his response quite rude while some said he was under pressure or being threatened by the highest authority.

Maybe Luis Lamar made the whole story just for fun or he did really encountered the underwater aliens but was afraid of the secret intelligence.

The idea that the ocean is inhabited by extraterrestrials is still debatable. One such incredible USO account was shared by former Gunner’s Mate John Baughman, who served in the U.S. Navy from 2008 to 2013. He was stationed on the United States Navy’s third Nimitz-class supercarrier “The USS Carl Vinson” in 2010 when he first saw Tic Tac UFO underwater.

He said: “I was staring into the water from above when a large, flat, white ’Tic Tac’ object, approximately twenty feet in length, suddenly appeared in my view below me, moving right and darted into the depths as fast as it appeared. I couldn’t really comprehend what I saw. It was definitely a solid object, but when it descended, its forward end rapidly collapsed in on itself and disappeared.”

Another USO encounter occurred with the crew of the Soviet Submarine in the south of the Pacific ocean. At the depth of 260 meters, the six disc-like objects were moving towards the submarine at the speed of 426 km per hour. The crew could not escape their pursuit, and the commander ordered the crew to rise to the surface. The crew saw through the periscope that the objects came out of the water and took off at absurdly fast speed.

Besides, the most interesting encounter of the Russian military occurred beneath Lake Baikal in 1982. Seven trained Russian navy divers claimed to have seen about 9 feet tall humanoids, 50 meters deep into the lake during a research mission. They were wearing tight silvery suits and spherical helmets on their heads. It was surprising for the divers to see them without any scuba gears, breathing underwater.

Among these cases, the abduction of Betty Andreasson Luca is the most documented case where she claimed to have visited an underwater base. During one of her hypnotic regression sessions, she remembered one of the early abductions that occurred to her in childhood. It took place in 1950 when she was taken from her home into a spacecraft as usual. But this time, the craft was flying toward an ocean or sea. She was terrified that the craft would crash into the water. But the ship submerged into the water and entered into a kind of tunnel. Betty could see everything underwater, as the place was filled with light. She saw people from all eras, different races, encased in the glass container. Fowler called it “The Museum of Time.” Betty said that people in the container were in old-fashioned clothes, and there were uncountable cubicles with humans inside at that underwater base.

But the most credible underwater UFO encounter case was shared by Lt. Col. Richard French. He had served in the US army for more than 27 years. He gained his commission in the army and become a fighter aircraft pilot. In Newfoundland, Canadian Province, he saw two aliens repairing their ship submerged underwater.

He testified about his work on the UFOs in 1952 in front of 6 former members of Congress at the Citizen Hearing in 2013.