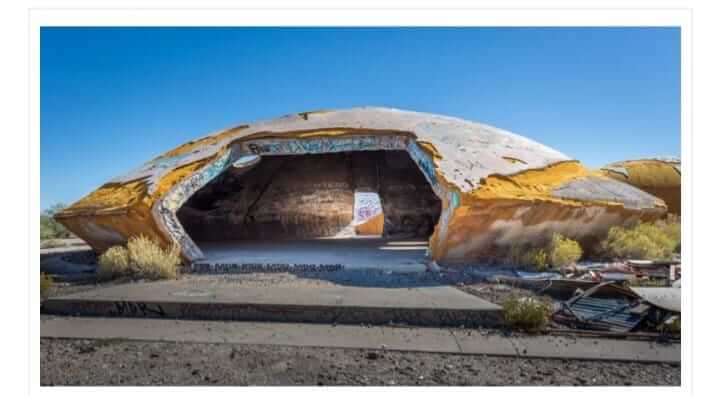 What were the Casa Grande domes used for?

The Domes were built to facilitate the manufacturing of computers back in the late 1970s early 1980s but was never completed, evident from a couple of foundations that were started and left to molder. One of the buildings is shaped like a flying saucer and the other three are as if spheres were joined together, looking like huge concrete caterpillars.

Talk from the locals about the domes concerns ritualistic witchcraft and satanic worship. “Stay out of there and don’t go into the tunnels” is the refrain, and indeed there are tunnels under the Eastern end of this facility. But despite all the stories whether anything more sinister than underage beer-drinking, ghost stories, and the occasional squatter spending the night, has ever happened is unknown.

Where are the casa grande domes located?

Just located off of the freeway in Casa Grande Arizona. It’s accessible via Casa Grande, Interstate 8 Thorton exit. Then go south one mile and it’ll be on the east side of the road. 7401 S Thornton Rd, Casa Grande, Arizona, United States

The Domes of Casa Grande on Google Maps:

The History of The Domes Casa Grande

The Domes were built in 1983 by InnerConn Technology Inc., a manufacturer of circuit boards for computers and watches. In 1982, Patricia Zebb, the owner of InnerConn, announced plans to relocate the company headquarters from California to the 135-acre site in Casa Grande, AZ.

The unusual shape and composition of the structures was chosen for its relatively low cost, speedy construction time, and efficient insulation. Each structure took approximately six weeks to build and cost about $150,000 apiece.

Construction went something like this: After the foundations were complete, giant balloons were mounted onto them, supported by steel skeletons. A coating of polyurethane foam was applied to the outside of each balloon, which hardened to form a layer several inches thick. An additional three inches of concrete was then added to form the outer shell then the balloons were deflated creating the domes.

The project was halted, unfinished, in 1983 when InnerConn Technologies defaulted on a loan and Union Bank of California assumed ownership of the company’s assets.

Since 1983 the domes have been abandoned, a site known for sightings and vandalism. The unique shape of the domes is said to allow large amounts of energy to be harnessed, opening portals to the other side. There have been several firsthand accounts of hearing strange voices and seeing dark shadows at the domes.

The site was purchased by Daniel and Karon Peer in 2006. Ownership quickly became more of a burden than the Peers had bargained for. The government ordered them to clear the land of all the waste that had been illegally dumped over the years. It proved to be a costly and time-consuming job. The Peers also had to deal with the liability of a relentless stream of vandals, ghost hunters, and UFO enthusiasts entering the unsound buildings. It didn’t help that the site was seen as an ideal location for parties, raves, and underage drinking.

With so any people stopping to check out the place, it is no surprise that visitors have witnessed elusive figures lurking nearby. I wouldn’t be surprised if the suspicious dark figures were actually trespassers trying to hide when they noticed others entering the property.

Many of the reports of strange noises can also be explained. The unusual shape of the structures causes normal sounds to bounce off the walls in distorted echoes. Wind rushes through the hollow buildings, producing bizarre sounds as it passes through doorways and holes in the ceiling and beats sheets of rusting scrap metal against the walls.

The Ghost Stories of The Domes Casa Grande

Ghost stories and rumors of strange encounters surround the mysterious dome-like structures that sit abandoned in the desert of Casa Grande. A closer look at the site reveals its incredible beauty and clues as to why so many people swear the place is haunted.

Stories tell of whispers in the dark, strange echoing footsteps, and a mysterious figure that wanders the grounds, lurking in the shadows to stalk intruders. Visitors parked on Thornton Road have heard tapping noises on the outside of their cars. Some have even reported hearing the distant muffled cries of children. What dark history does this site possess that would account for such eerie phenomena? What gruesome events left the indelible stains that draw malevolent visitors from the netherworld? The truth is far less interesting than you might imagine.

South of I-8, a long stretch of pavement known as Thornton Road cuts through the parched Arizona desert. The landscape is monotonous and unremarkable as far as the eye can see, until you approach the bizarre cluster of UFO-like buildings known as the Casa Grande Domes.

Four hollow structures, one flying-saucer-shaped and three long and caterpillar-like, share the plot with the unfinished foundations of three others. A network of narrow tunnels runs beneath.If you’re interested in using the domes as a location for filming or photo shoots, a helpful sign out front displays pricing and contact information.

Update November 2019: The domes, despite being ordered for demolition, are still standing. For any potential visitors, please note that the domes are on private property, and being on the property without permission and paying an entry fee will (according to reports by other visitors) result in local law enforcement trespassing you, with potential for arrest or fine.