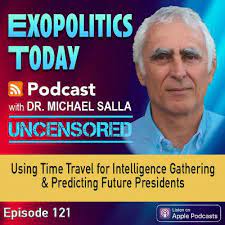 Michael Salla
Andrew D. Basiago, J.D., reveals more of his time travel experiences associated with Project Pegasus that he was formally a part of from 1969 to 1972. In this interview he goes into detail of what he encountered when he was transported to the year 2045. He describes how he underwent age-progression as one of the experiments that would prepare him for the rigors of time travel. Andy discusses how future Presidents and public officials would be pre-identified using the time travel technology. These included presidents George W. Bush, Bill Clinton, and Barack Obama and future Secretary of Defense, Donald Rumsfeld. Intelligence gathering of future events such as the September 11, 2001 attacks was an important aspect of Project Pegasus. In this interview Andy discusses the critical role Rumsfeld played in Project Pegasus, and how he behaved ethically in his interactions with Andy and other child participants. Rumsfeld’s role in subsequent events such as the Jackie Gleason Homestead AFB incident with President Nixon is discussed, as well as his role in revealing the Pentagon’s black budget one day prior to the September 11 attacks, and his support for the creation of a US Space Corps that was stymied by the Pentagon bureaucracy.