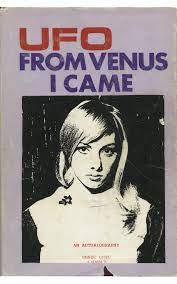 There have been accounts of various personalities who once lived on Venus and were brought to earth. Ranging from Nikola Tesla, Valiant Thor, Ralph Lael, and Elizabeth Klarer, they are all believed to be the inhabitants of Venus. According to scientists, Venus was once habitable for life, similar to Earth. Scientists also warn us that if we do not care about global warming and other phenomenon, then Earth will also become inhabitable one day.

This article is about Omnec Onec, a woman who claims to have been born on Venus in another realm and later landed on Earth via a spaceship. In 1991, Lt. Colonel Wendelle C. Stevens, a UFO researcher, published Omnec’s autobiography, “From Venus I Came.” As per the book, it is written that Omnec resided in Teutonia, a city on Venus, for 210 years before traveling to Earth with her uncle aboard a spaceship.

Here on earth, she took the form of a young girl who had unfortunately died in a bus accident. The book was promoted by Billy Meier, a well-known alien contactee who claimed to have had frequent communications with the Plejarens. Intriguingly, before coming to Earth, she had lived on Venus’s astral plane, which is a beautiful world with cities made of crystal. In her autobiography, Omnec writes that Venus was also a beautiful place like Earth, but that the climate changed and Venus became habitable for humans.

So, with the help of spiritual development, Venusians found themselves ceasing to exist in the astral plane with no physical touch. As described by Omnec, the astral plane is a dimension of lower density that cannot be seen or touched physically.

“As I was born on the planet Venus in another dimension and came to your planet as a young child, I was able to retain the knowledge and information that I had gathered as a soul through many incarnations and life times. I can keep this information intact, and what I teach people is actually what I KNOW and not what I’ve read about or what I’ve heard, but what I have experienced through many different life cycles on Earth and in other dimensions.”

She came to Earth as a spiritual leader with the intention of assisting mankind in comprehending their own spirituality, fostering an environment of peace, and having the experience of the divine that they are lacking.In 1951, she went on a trip to Tibet, where Buddhist monks helped her adjust her body to the gravity of the earth so she could live here.

Later, she relocated to Tennessee in the United States in 1955 and acquired the identity of Sheila Gipson, a young seven-year-old girl who was killed in a bus accident. In addition to this, she shared a karmic connection with Sheila. Sheila’s grandmother was responsible for Onec’s upbringing.She revealed that since the days of Atlantis and Lemuria, scientists from other planets have been studying Earth and its inhabitants, and from those scientists she learned about Earth.

“I gathered a few plants and tried to preserve them and I had a ring and they picked me up in a small craft what we call the scoutship and transported me from the surface of Venus we have like a dome over the city and it’s not visible because of the gases by covering the city but you have to know the location our ships have the ability to travel through time from visions because of their vibratory making control it has over the magnetic waves and to create their own gravitational force we left the surface met a huge mothership cigar-shaped ship went into the chamber partnership and then I prepared for my journey to earth from Venus which didn’t take very long maybe 24 hours we came close to the surface and once again I prepared to board a small craft.”

The name “Omnec Onec” means “spiritual rebound.” Like her name, she is a spiritual person and a believer in reincarnation and Karma. She only agreed to visit Earth because of her belief. On earth, she sustained a healthy life until 2009, when her half body was paralyzed due to a heart attack. She also married a guy and had four children. Moreover, she was blessed with three grandchildren.