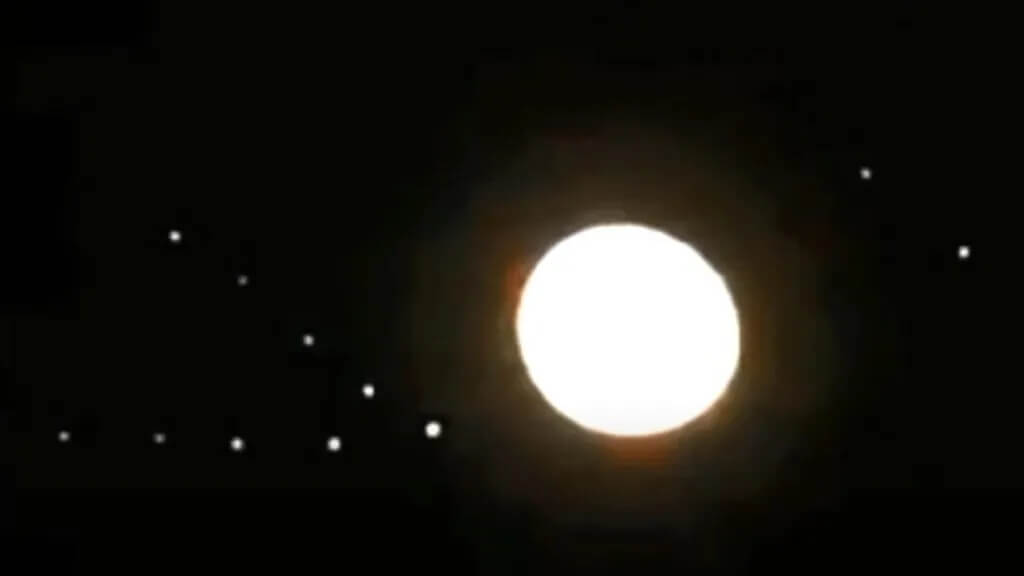 Infinity Explorers
In the video recorded from New Hartford, a town located in Oneida County in the US state of New York, a fleet of UFOs can be seen floating in the night sky and eventually they line up in a triangular formation near the moon.

“11 UFO Orbs make a pattern on the side of the Moon”, witnesses said. “I had doubts about the publication of this video, but then I decided that the world needs to see it. Maybe someone can find out what it means. This sighting was witnessed by two people. “

The spectacular images have caused quite a stir on social media, where many compared them to scenes reminiscent of science fiction movies. According to Waring, the mysterious UFO formation near the Moon could be a code, and that aliens are trying to tell us something really important about the future of humanity.

“Watch this incredible video and you will see a fleet of glowing UFOs in the distance with the moon behind them,” writes Waring on his UFO Sightings Daily blog. “UFOs are not really close to the moon, yet they are visible with the moon behind them. The UFOs are seen forming a triangular formation and the person recording them seems to think it is a code. Maybe it is, but what does it say? It seems the aliens are trying to tell us something… something that can change the future of humanity for the better. “

As the video uploaded by Waring went viral on social media, citizens have offered their explanations about the strange sighting.

Most of the users who saw the images assured that sightings like these are irrefutable proof of the extraterrestrial presence on our planet. Some suggest that the Moon is not really a natural satellite as we have been led to believe it could be artificial and inside it could hide an extraterrestrial base.

They are based on the fact that in 1968 when Apollo VIII moved into orbit around the Moon, astronauts observed a colossal object of extraterrestrial origin, which then disappeared in the next orbit. The photographs were taken but were never publicly displayed.

Furthermore, all missions on the Moon have had encounters with extraterrestrial objects or UFO sightings.

However, skeptics do not believe in any of these theories, claiming that the objects in Waring’s video could probably be high-altitude drones. Come on, the typical explanation.

What do you think about the triangular formation on the Moon? Are they of extraterrestrial origin or do you have another explanation?