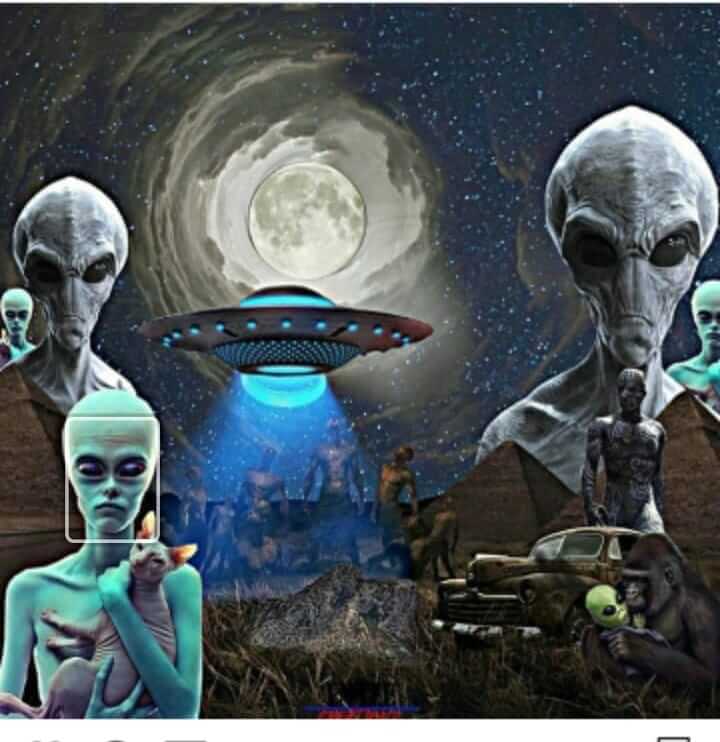 Where is everybody? In a universe of at least 100 billion galaxies, why hasn’t anyone stopped by?The answer depends on who you ask. Some favor the notion of time and distance — extraterrestrial life may not know we’re out here, or may be similarly limited to their local solar system by the finite speed of light. Others make more dire predictions for the fate of advanced life in the universe: Catastrophic events such as war, disease or stellar bad luck that effectively eliminate evolving life once it reaches a certain threshold.But what if the truth lies closer to home? What if invisible aliens exist among us, already here but unseen by human eyes? Astrobiologist Samantha Rolfe of the University of Hertfordshire took this idea and ran with it, exploring the possibility of a “shadow biosphere” capable of supporting alien life on Earth — just not life as we know it.

What We Do in the Shadows

Phosphorus represents a key biochemical building block for RNA and DNA formation in earthbound life. All organisms — plant and animal — require a source of phosphorous to survive, despite its relative scarcity. As noted by Matthew Pasek of the University of South Florida, “phosphorous is the least abundant element cosmically relative to its presence in biology.”

The shadow biosphere theory postulates that other forms of life may exist alongside known organisms but operate in ways we don’t recognize as life. Consider the Mono Lake microorganisms, which use arsenic rather than phosphorus to generate essential energy — while their arsenic adaptation stems from very specific environmental conditions, it’s also possible that larger-scale shadow biospheres have existed throughout Earth’s history. According to Astrobiology Magazine, Earth could have had several “cradles of life” over its 4 billion year history; some may have collapsed as environmental conditions changed while others might have been overrun by our phosphorus-loving progenitors.

It’s also possible that meteorite impacts — or covert alien landings — introduced life into our ecosystem that required a novel energy source, and shadow biospheres have been humming along undetected and undisturbed for centuries or even millennia.

What does this mean for our theory of invisible aliens? The good news is that a proof-of-concept shadow biosphere already exists in arsenic-using organisms. The bad news? While shadow-biological microbes might be alien to us they’re probably not from a galaxy far, far away.

While energy creation is one way to approach the search for life, it’s also worth taking a look at our biggest chemical contributor: carbon. All life on Earth is carbon-based, since carbon makes it easy to create the strong double and triple bonds needed for cell walls, and is also soluble in water — another essential life-encouraging compound — when converted to carbon dioxide.

But what if carbon isn’t all it’s cracked up to be? Rolfe considers the possibility of an alternative biochemistry based on silicon. As she points out, silicon is widely available on Earth’s surface and — just like carbon — has four electrons to create bonds with other atoms. There are challenges: Silicon is heavier, has a tough time creating strong bonds and isn’t water-soluble. Still, scientists have demonstrated that it’s possible to create bacterial proteins that bond with silicon, effectively creating tiny, silicon-based life.

The chances of silicon-based visitors, however, remains slim here on Earth. Still, there’s speculation that intrasolar moons or exosolar planets could have a chemical makeup that favors silicon life over its carbon companion. Here, climbing out of the terrestrial-focused valley of common life classification means thinking outside the biological box to prioritize the collective action of potential aliens rather than their chemical composition.

What if our invisible aliens aren’t living among us in shadow biospheres or using different building blocks? What if they’ve already visited — and aren’t coming back? What if they’re not aliens at all?

As noted by Business Insider, it’s possible that interstellar travelers visited Earth billions of years ago when their own star system was closer to ours. Maybe they watched the first organic molecules form, or walked among the dinosaurs. Perhaps they accidentally nudged an asteroid toward Earth on their way out of town? Other experts like Harvard’s Avi Loeb wonder if strange interstellar objects like ‘Oumuaumua — the first known interstellar object to pass through our solar system, detected in late 2017 — were of alien origin and sent to Earth deliberately.

Go deeper into we’re-not-alone-out-here speculation and you’ll find theories like the one from Michael Masters of Montana Technological University in Butte. He notes that while the collective evidence for unidentified flying objects (UFOs) continues to grow, details on actual extraterrestrials are almost entirely absent. He posits that the seeming existence of advanced technology without alien operators could suggest a future in which humanity discovers time travel, humans regularly visit the past and occasionally make the mistake of letting their advanced craft get noticed. Since they’re physically and visually human, any crash-landings or future-people infiltration’s would go unnoticed. In effect, they’re temporal visitors; aliens by eons rather than elements.

We Are Not Alone

Are we the only house in the galactic neighborhood? Maybe not. Although shadow biospheres and invisible aliens aren’t the probable solutions to our carbon-based isolation, they’re critical steps in changing the way we view life, the universe and everything. Broader perspectives and bigger thoughts make it more likely that we’ll recognize the telltale signs of life — even if it’s not what we’re expecting.