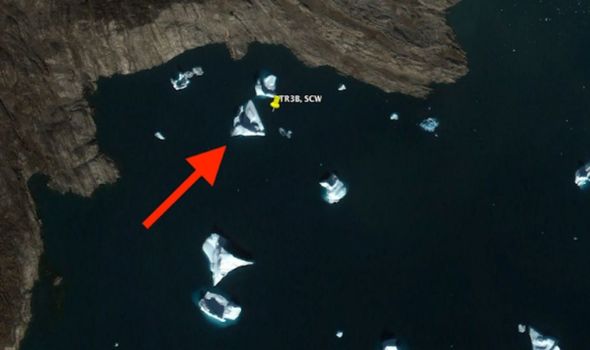 A HUGE UFO has supposedly been spotted in Greenland, with conspiracy theorists arguing that it crashed into Earth millions of years ago.

By Sean Martin
Alien hunters browsing through Google Maps have spotted something strange semi-buried beneath the ice of Greenland. Conspiracy theorists believe they have discovered a UFO in the snow of Greenland, claiming aliens crash-landed on our planet “millions of years ago”.

The apparent object in question is triangular, and according to alien enthusiast Scott C Waring, the cockpit of the ship is clearly visible.

Now, Mr Waring is calling on Elon Musk to retrieve the spaceship in a bid to boost humanity’s chances of getting to Mars.

Mr Waring wrote on his blog UFO Sightings Daily: “I found a triangle UFO that was attached to an iceberg floating off of Greenland.

“I used Google Earth map to find it. The ruler on the map states that the UFO is 68 meters across.

“It’s possible this UFO crashed to Earth millions of years and got buried beneath a glacier that melted little by little, dropping fragments of itself into the ocean.

“The black line across the cockpit area is very obvious and shows us that this really is a craft, not a coincidence.

“The corners of the craft are perfectly equal and slightly rounded off. This triangle craft looks like there was ice above it, but apparently it melted off and only the side areas of ice remain still attached to it.

“Now if Elon Musk could just retrieve this craft, humanity could colonize Mars and other planets much faster.”

The ‘UFO’ looks more like an iceberg (Image: GOOGLE EARTH)

However, on closer inspection, the ‘spaceship’ looks more like a glacier melting away due to the effects of climate change.

Mr Waring’s sighting can be put down to a phenomenon known as pareidolia.

Pareidolia is a psychological phenomenon in which the brain recognizes familiar shapes and patterns when there is not one there.