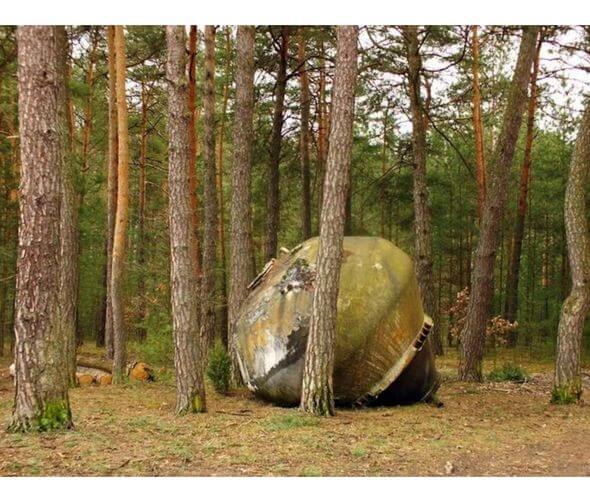 UFO hunters have excitedly discussed a bizarre object found in a Polish forest, which some believe to be evidence of a crashed alien space capsule.

The pictures purport to depict an object vaguely reminiscent of a space capsule larger than an adult, lying on its side surrounded by trees and empty bottles of alcohol.

The conspiracy theorist took to his UFO Sightings Daily site to speculate how it may relate to a famous UFO event.

He said: “This object is the exact shape of the famous Kecksburg UFO that crashed in December 1965 at Kecksburg, Pennsylvania.”

UFO historians have long considered the Kecksburg “UFO” to be one of the greatest unsolved mysteries.

Eyewitnesses claim it was not a meteor but a craft of some kind, which members of the US military then reportedly took away.

At 4.47pm local time a flaming object apparently flew over Ohio and into Western Pennsylvania.

The officially unexplained object was described as being guided, altering its path and making a level descent away from residential areas and into the woods of Kecksburg.

The first people on the scene said it was partly buried in the ground and was made of metal, between 10 and 12ft long, and acorn-shaped.

There were also unconfirmed reports of indecipherable markings on a band near the bottom said to vaguely resemble hieroglyphics.

Mr Waring said: “The dimensions of the object are very similar and they are also similar to a space capsule.

“Also there are holes on the side, vents for controlling the direction of the object.

“This is an alien craft. Look how it’s nearly impossible to move such an object when all the trees around it would prevent it from passing through.

“It could only fall from above. 100 percent alien technology.

“From the looks of the moss growing on the crashed UFO, it looks like it’s been sitting there for years.”

Local media state the mysterious object was found near Ruda Zajączkowska and Gnieździska in the commune of Łopuszno.