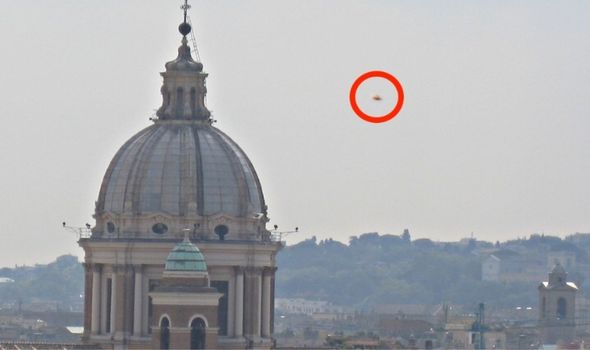 UFO hunters have reported an apparent ‘alien’ anomaly above The Vatican in an archive photo.

By Tom Fish
The latest alleged UFO sighting has electrified alien life conspiracy theorists online. Reportedly found in a photo dated October 2007, the series of images depicts the world-famous dome of St Peter’s basilica. But lurking to its right is a suspiciously-shaped anomaly, some have claimed is an alien spacecraft.

An orange disk was caught in a photograph over Vatican city

He said on his UFO Sightings Daily blog: “This report is from 2007, but just reported today at MUFON.

“An orange disk was caught in a photograph over Vatican city.

“UFOs have been seen over the Vatican before, but orange UFOs are usually seen in South America and Central America, so this is odd.

“The object is a disk viewed from the side.

“The disk doesn’t have the classic hump but instead its upper center comes to a point and lower center is flat no bulge at all.

“If it was traveling fast it may have gotten caught by accident.

Then, without offering any actual evidence, Mr Waring proceeds to suggest a bizarre explanation for the alleged anomaly.

He said: “The Vatican’s stance of alien life comes mostly from scientific analysis of chemicals, substances and textbook strategies of old.

“Vatican astronomers would never confirm any UFO as being real, unless it landed in Vatican City.

“It’s a more exact method of science, but its a very slow method.”

However, a more rational explanation for the anomaly is it is plane, quite possibly reflecting sunlight.

The UFO watcher also provides an account from the alleged original eyewitness.

I Disagree, on it being a Plane reflecting the sunlight. Why, because The Vatican is in a No Fly Zone just like Poles of Earth are prohibited to fly over.