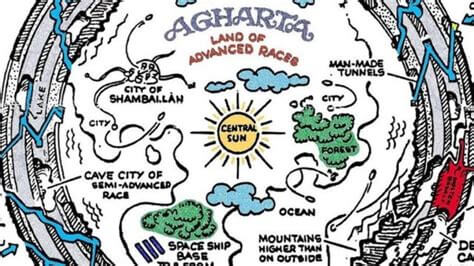 Scientists have discovered two giant structures inside the Earth. They are located on opposite sides of our planet and their size may be compared to continents. Each of these structures is almost 100 times bigger than Mount Everest and is located at the core of the Earth, at a depth of 2900 km. Seismic studies show that the discovered formations have a different composition than the rest of the Earth’s mantle.

According to modern knowledge, the Earth is built of layers. At the very top, there is its crust, this is what we see around. Underneath is a layer of the mantle, and under it, there is a liquid outer core and a solid iron inner core.

New structures discovered beneath the Pacific Ocean and between Africa and the Atlantic unexpectedly support the ridiculed theory of the empty Earth that has existed for many years.

In 1692, famous astronomer Edmund Halley hypothesized that there is empty space inside the Earth. He suggested that underground, there are two empty structures about 800 km far from each other. According to Halley, both structures are separated by the atmosphere and rotate at different speeds, so they have their own magnetic fields.

In 1818, this idea was picked up by American scientist John Cleves Symmes Jr., who suggested that there are four empty spaces 1300 km thick inside the Earth. He said that one could reach them at the poles, which, in his opinion, contained the entrance to this underworld. Cleves Symmes even tried to organize an expedition to the North Pole, but he did not find enough funding, so the idea collapsed.

, is a character who cannot be ignored in this context. He had been looking for entry into the underworld since 1926 when he flew over the North Pole. Three years later, he circled the South Pole. He made his first expedition in search of an entrance to the interior of the Earth in 1947. He traveled 2,750 km and, according to him, his goal was to achieve what was behind the pole, which he considered the “Great Mystery.”

Byrd probably knew that the Germans were also trying to open the entrance to the underworld. During the Nazi rule, the Thule Society was interested in this topic. The expedition plan that they prepared was also supported by Adolf Hitler, who ordered an entrance to Antarctica to be sought. Some people say that ultimately it was possible, but the discovery was classified.

In any case, many people say that the entrance to the hollow Earth exists. This is confirmed by satellite images of the North Pole, taken in 1968. A hole is visible on them, which may indicate that this is the end of one of the empty structures. However, this conclusion has not been formally confirmed yet. Only in 2014, an expedition was planned in search of penetration into this underworld, but its organizers began to disappear under mysterious circumstances. For this reason, the company ended in failure.

For many years, the theory of the hollow Earth has been ridiculed as absurd, but the truth comes out gradually. A few years ago, it was revealed to the world that deep underground, there is a lot of water, more than in the oceans of the Earth.