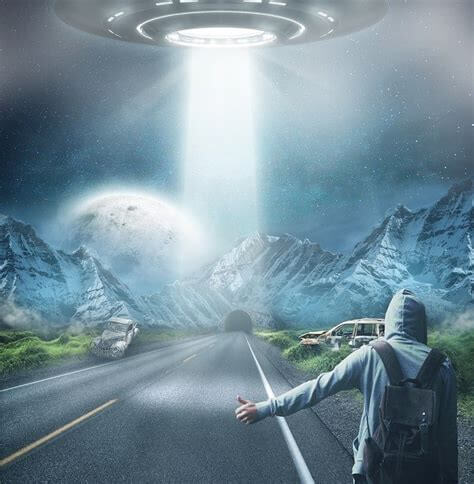 The story of Eddie Page brings the most bizarre claim in the world of UFOs and aliens. He claimed to be an extraterrestrial, a hybrid alien whose father was from the Pleiadian star system.

Eddie Page was born as Tommy Coleman Jr. in Florida. He was adopted at a young age, and his life was full of various oddities.

It all started with the numerous high-speed boomerang-shaped UFO sightings that he saw at the age of 11. But things got more interesting and complicated when he joined the US Marine Corps in 1972 and was sent to Vietnam on a top-secret mission with an elite group of the special secret service.

According to Page, something went wrong, and he was suddenly attacked from the bushes by the Vietnamese soldiers and passed out. When he woke up, it seemed to him that only a few minutes had passed. He was lying in a green rice field in a special issue black noninfrared uniform but had no weapons or equipment.

While he was trying to figure out what had happened, military helicopters flew close to him, the American soldiers jumped out of them, seized Page, and began to interrogate him. It turned out that the paddy field was more than 500 miles from his original drop-off point, and 11 days passed since he had been attacked, that period of time he could not remember at all.

After three months of interrogation, several doctors were sent to him from Germany and other parts of Europe. It turned out that Page had an unusual state of internal organs and an abnormal blood type.

Page’s military medical records stated: “Not of Human Origin.” Thus, he was not completely human.

Eventually, he got released and returned to his normal life. He has never been told why he ended up in that rice field and what had happened during those 11 missing days.

After a few years of his release, Eddie’s first wife had a baby, but he was not allowed to see his child. Besides, both the baby and Page’s wife disappeared from the hospital, and he has never seen them.

Years after being haunted by this past, Eddie decided to undergo a regressive hypnosis session to try to reconstruct what had happened during those 11 days. Eddie met a hypnotherapist and regression analyst named Jiles Hamilton.

While in hypnosis, Eddie found out shocking details about the missing 11 days.

He remembered that his mission failed, and his entire unit was killed, but he was abducted by aliens from the Pleiades star system who came to save him from death because he was also shot.

He was taken in the spaceship, surrounded by 3 or 4 small aliens in silver suits. He recalled he was submerged inside some liquid which actually healed his wounds.

Eddie heard a small being through telepathy, saying: “No son of mine will be killed!”

According to Eddie, he was originally part of their hybrid baby program, which was carried out with the cooperation of the US government.

He further discovered that he was one of 32 clones in the experiment, consisting of 21 women and 11 men, of whom only 8 cloned survived so far.

Page added that since then, he had been constantly pursued by secret agents and that he has medical records to support his claims. His documents describe that he has strange internal organs and anomalies in the composition of his blood.