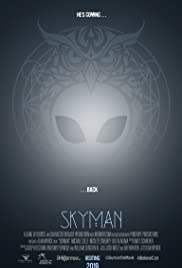 The movie was written and directed by Daniel Myrick who is best known for The Blair Witch Project, which he co-directed with Eduardo Sanchez.

The story for Skyman begins in 1987, “just days after his 10th birthday, Carl Merryweather rocked the local news community when he claimed he was visited by an extraterrestrial life form. Despite other alleged sightings reported that same evening, skeptical authorities shrugged off the claims. Now, almost three obsessive decades later, Carl (played as an adult by Michael Selle) is set on a mission to reunite with the being he calls ‘the Skyman’ to not only prove the skeptics wrong but also ultimately find his own true sense of purpose.”

When talking about the film, the director said:

“I grew up in an era where the talk of UFO’s, Bigfoot and the ‘Devil’s Triangle’ were all the rage and was inspired by the personal experiences from so many people not unlike Carl Merryweather. Whether you believe in the legitimacy of these accounts or not, they reveal a deeper human truth that I find quite compelling and speak to the notion that so many of us are searching for something greater than ourselves – and I’m excited to finally bring a little bit of that mystery to the big screen.”

The movie is presented in a documentary-style type format and it looks ok. I don’t know, I just expected the guys behind The Blair Witch Project to do better things with their filmmaker careers.

Skyman will be released in drive-in theaters beginning June 30th and VOD the following week. Check out the trailer below.