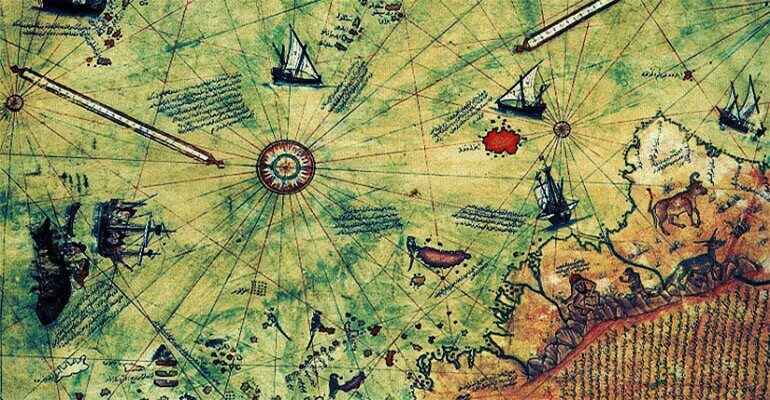 Humanity’s history is extremely puzzling. On one hand, we have at our disposal only a small portion of knowledge from the past, most of it being destroyed or questionable in the light of new discoveries. On the other hand, the pre-existing information seems to challenge our way of thinking and make us doubt that what has been proposed as reality so far may in fact be distorted or not entirely true.

We live in a world with plenty of unexplained discoveries. From ancient texts depicting alternative historic events, to ancient structures, bizarre rituals and natural phenomenon that defy the human logic and pass in the unexplained section. Humanity appears to have amnesia, gathering bits of the past in the hopes of one day discovering the truth from the bigger picture, but so far we have no higher entity to confirm or explain the entire journey we followed on this planet.

The enigmatic Piri Reis map is an ancient document which clearly challenges today’s scientific doctrine. This piece of knowledge is an authentic document that was put together at Constantinople in AD 1513 by the military intelligence of Admiral Piri Reis of the Ottoman Empire, a renowned historical figure accounted by numerous historical records. The map highlights the western coast of Africa, the eastern coast of South America, and the northern coast of Antarctica. The Ottoman Admiral kept a copy of it, and the original, which was discovered in 1929, is comprised of various documents dating back to at least the fourth century BC, plus information gathered my multiple explorers. So, what’s so challenging about this map?

More than one thing, that’s for certain. But, probably the most amazing fact is that it incorporates a continent considered by our history books to have been discovered only in 1818 – Antarctica.

Equally intriguing is the fact that the Piri Reis map depicts a 2.7 million-square-miles region in the Antarctic known as the ‘Queen Maud Land,’ and in accordance to modern science the highlighted area should be millions of years old since the ice sheet covering Antarctica appears to be melted.

The scientific point of view considers the ice-cap which covers the Arctic to be millions of years old. However, according to the Piri Reis map, the northern part of the continent has been mapped before the ice did engulf it, indicating that these regions went through a long ice-free span that might had ended approximately six thousand years ago, theory which contradicts with the current historic standards and beliefs. So who could had possibly mapped this area if there were no humans on Earth millions of years ago? Or better said, could history prove to be wrong when describing the ice in the Arctic as being millions of years old?

“This indicates the coastline had been mapped before it was covered by the ice-cap,” he confirmed. “We have no idea how the data on this map can be reconciled with the supposed state of geographical knowledge in 1513,” Ohlmeyer added.

IT APPEARS THAT ACCURATE INFORMATION HAS BEEN PASSED DOWN FROM PEOPLE TO PEOPLE. IT APPEARS THAT THE CHARTS MUST HAVE ORIGINATED WITH A PEOPLE UNKNOWN AND THEY WERE PASSED ON, PERHAPS BY THE MINOANS AND THE PHOENICIANS, WHO WERE, FOR A THOUSAND YEARS AND MORE, THE GREATEST SAILORS OF THE ANCIENT WORLD.

WE HAVE EVIDENCE THAT THEY WERE COLLECTED AND STUDIED IN THE GREAT LIBRARY OF ALEXANDRIA (EGYPT) AND THAT COMPILATIONS OF THEM WERE MADE BY THE GEOGRAPHERS THAT WORKED THERE.

When Hapgood and mathematician Richard W. Strachan tried to understand how the map was created, they stumbled upon the most interesting hypothesis. After comparing the map with modern day photographs taken by satellites, they discovered significant similarities. From this point of view, it’s plausible that the Piri Reis map had been achieved compiling aerial photographs taken from a really high spot, be it from a mountain top or even from the air. If so, how can science interpret this if the map is considered to be millions of years old?

A SPACESHIP HOVERS HIGH ABOVE CAIRO AND POINTS ITS CAMERA STRAIGHT DOWNWARD. WHEN THE FILM IS DEVELOPED, THE FOLLOWING PICTURE WOULD EMERGE: EVERYTHING THAT IS IN A RADIUS OF ABOUT 5,000 MILES OF CAIRO IS REPRODUCED CORRECTLY, BECAUSE IT LIES DIRECTLY BELOW THE LENS. BUT THE COUNTRIES AND CONTINENTS BECOME INCREASINGLY DISTORTED THE FARTHER WE MOVE OUR EYES FROM THE CENTER OF THE PICTURE.

Is it possible that this ancient map was made using aerial technology in a time uncharted by modern day science? Or if this isn’t the case, who had the technological means to attempt such a detailed geographical analysis of Antarctica a couple million years ago? And most of all, what ancient technique allowed for them to design the map as if it was seen from above?

Whatever the case, the Piri Reis map contributes to the assumption of ancient civilizations far greater developed than what science is letting us know. It’s unexplainable how the Mayans, Sumerians, and others knew of celestial bodies that in reality can only be detected using modern tools, but considering the conclusive evidence given by this ancient map, we can form a slight idea of the means possessed by the ancients.

If aerial photography was a Piri Reis map, it’s not hard to imagine how the old dwellers of the Earth reached those heights. If such information will be officially disclosed in the future remains to be seen, but until that time comes, it’s better to use our own judgement when it comes to finding answers. The truth may already be among us.