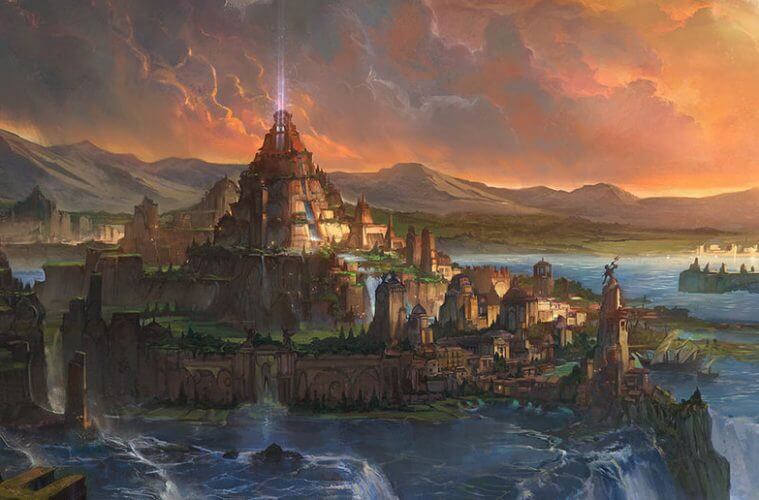 A theory of the existence of the mysterious island known as Atlantis was first mentioned in the dialogue “Timaeus et Critias” by Ancient Greece philosopher Plato. Skeptics have always denied this theory and called it a myth. Nevertheless, British Archeologist Sir Arthur Evans supported a hypothesis according to which Atlantis and the island of Thera (also called Santoríni, eighty miles to the north of Crete) could be the same. He named it “Minoan Hypothesis” after the mystic king Minos.

In his dialogue, Plato mentioned that the first information about Atlantis came from Ancient Greece ruler Solon, who visited Egypt in 600 BC. There, he found Egyptian records that stated about Atlantis in 360 BC. Plato described Atlantis as an island situated far in the Atlantic Ocean, bigger than Asia and Libya together.

According to ancient Egyptian priests, Atlantis was a large state, full of gold, copper, silver, fertile land, palaces, and temples. The people of Atlantis were ruled by ten kings who had a powerful fleet and a large army. Thousands of years before Solon’s conversation with the priest, a war had happened between Atlantis and Greece that ended with the defeat of Atlanteans. Then, the island was wiped out by natural disasters. Even if it is true, how could Ancient Egyptian know about the events that had happened before the emergence of their own civilization? Is Atlantis really a fictional island?

In 1872, French scientist Louis Figuier was first who suggested a link between Atlantis and Thera volcanic eruption in the Aegean sea that destroyed the Minoan settlement at Akrotiri, a nearby island at the coast of Crete. From the 1883 eruption of Krakatoa, French botanist Auguste Nicaise suggested that there could a possibility of civilization being destroyed by the natural catastrophes in Thera island. In addition, the Minoan Hypothesis proposed that Atlantis was destroyed in the volcanic eruption, wiping out the civilization.

It is believed that before 1500 BC, Crete and its nearby areas including Thera island were inhabited by Europe’s first civilization, the Minoans. Besides, scholar K.T. Frost suggested a link between Atlanteans and Minoans in 1909. He wad supported by a professor at Queen University Belfast.

In 1932, Greek archeologist Spyridon Marinatos found a cellar full of volcanic rock “pumice” at the archeologist site known as Knossos in Crete. He also found several stone blocks that had been pulled out by a strong force. According to him, the Minoan civilization had been destroyed by tsunamis and earthquakes initiated by a volcanic eruption. Under the pile of pumice, he dug up the city that was destroyed at the time of the eruption.

In 1939, Marinatos published his opinion in the academic journal “Antiquity” that the Thera eruption was behind the end of the Minoan civilization, but he did not put Atlantis’ link in it as it was forbidden by the editors. In 1951, a linguist in ancient languages from Graz named Wilhelm Brandenstein mentioned in his work “Atlantis: Grösse und Untergang eines geheimnisvollen Inselreiches” about the Mionan Atlantis Theory, echoing Sir Arthur and Frost’s ideas on the subject.

If Arthur’s Minoan hypothesis is true, then Atlantis could have a link with Minoan. Maybe after the catastrophe, the main island did not sink, but the smaller one and the Greeks defeated Minoans. Other inaccuracies in the stories of Atlantis happened due to human error while retelling the stories.