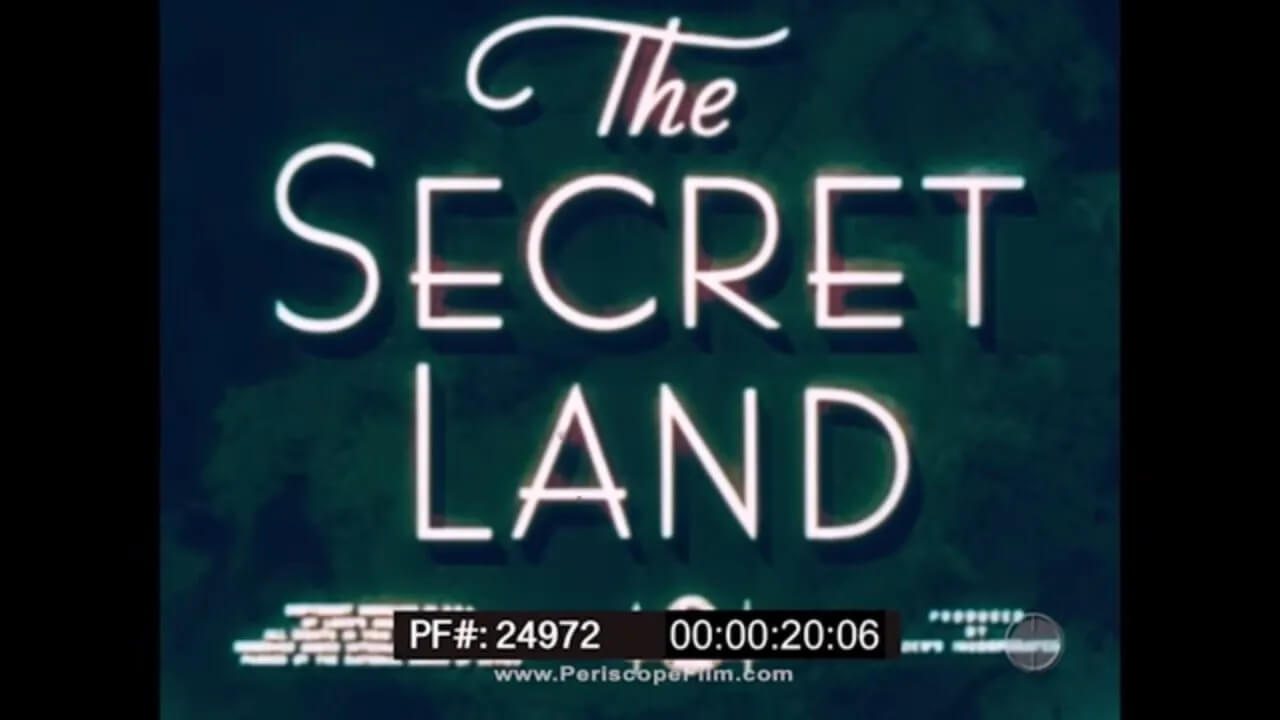 PeriscopeFilm
The Secret Land is a 1948 American documentary about an American expedition code-named “Operation High Jump” to explore Antarctica. It won the Academy Award for Best Documentary Feature. The movie was entirely by military cameramen. The expedition was under the overall command of Admiral Richard E. Byrd, no stranger to the Antarctic. This was a large undertaking involving 13 ships and over 4000 thousand men. The fleet departed from Norfolk, Virginia traveling through the Panama canal and then southward to their final destination. The trip through the ice pack was fraught with danger and forced the submarine that was part of the fleet to withdraw. The trip was a success meeting all of its scientific goals. The film is narrated by three Hollywood stars, all of whom served in the US Navy: Robert Taylor, Robert Montgomery and Van Heflin. In 1946, the U.S. Navy launches “Operation Highjump” to explore and map the Antarctic region and, in the process, test men, ships and equipment against the harsh climate. Chester W. Nimitz, Chief of Naval Operations, directs the expedition. Three groups make up the expedition: The central land-plane group, headed by Rear-Admiral Richard E. Byrd, will explore and map the interior from a base in Little America, while two other groups will explore and map the eastern and western coasts. The teams must finish their work before the end of the brief Antarctic summer. In addition to scientific equipment and other supplies, the ships carry sled dogs to provide land transportation. At the equator, men and dogs who have never crossed the equator are initiated in humorous King Neptune ceremonies. When strong storms hit the ships in the southern hemisphere, many sailors are injured and several seaplanes are lost. The rough seas prevent the central group from landing at Scott Island, but despite this setback, the men onboard celebrate Christmas with a traditional dinner and gifts. The central group now depends on an icebreaker to cut a path through the ice pack in the Ross Sea to the Bay of Whales and the base at Little America on the Ross Ice Shelf. Meanwhile, the western group has reached Peter Island. From there, seaplanes scout the coast, where they find explorer Robert Scott’s former camp. The progress of the central group is hampered by ice, and the submarine accompanying the ships is caught between two ice flows. The icebreaker returns to free the submarine, which is sent home. While the western group waits for the icebreaker’s return, they observe and capture for further study penguins, seals and other Antarctic wildlife. When the central group reaches Little America, the explorers unload their equipment and, making use of the twenty-four-hour summer daylight, quickly build a tent city and airstrips. Admiral Byrd flies in on the first airplane, which lands perfectly, but the remaining planes must take off at night in order to beat an approaching storm. After the blizzard clears, ice is cleaned off the planes, and a man crawls down a shaft to an earlier base buried under the snow. The cold, dry air of Antarctica has perfectly preserved the supplies that were left behind. While mapping expeditions fly over the land, divers test cold-water survival suits in the frigid ocean. On flights from their base in the Bellany Islands, the eastern group spots Mt. Aramis, the only active volcano near the South pole, and near the Shakleton Ice Shelf, the explorers discover 500 miles of snowless land heated by warm water lakes, which they name Bunger’s Oasis. The short summer is ending, and the fleet near Little America is becoming frozen in the ice. After the fleet is freed by an icebreaker, it departs, leaving behind Byrd and some volunteers to continue explorations by air. During the eastern group’s mapping of the Phantom Coast, mountains made of coal are discovered. A crew is lost during one flight, and after a search of two weeks, the survivors are found. Three men die in the crash and one, badly burned, loses his legs to frostbite. The icebreaker returns to pick up Byrd and his men, and the successful expedition returns home, having learned much about this largely unknown territory. We encourage viewers to add comments and, especially, to provide additional information about our videos by adding a comment! See something interesting? Tell people what it is and what they can see by writing something for example: “01:00:12:00 — President Roosevelt is seen meeting with Winston Churchill at the Quebec Conference.” This film is part of the Periscope Film LLC archive, one of the largest historic military, transportation, and aviation stock footage collections in the USA. Entirely film backed, this material is available for licensing in 24p HD, 2k and 4k. For more information visit http://www.PeriscopeFilm.com
Please remember we all have different opinions, Think Before You Speak or Write Something that is cruel to Others. After all, We are only Humans. Wishing you clear skies and wide eyes. To share your experiences or just leave a comment there is a area below. Read or listen.