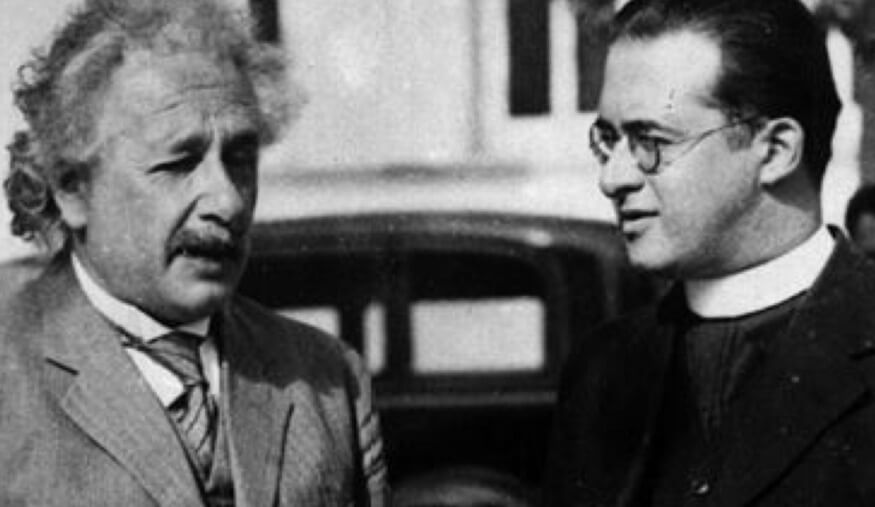 Anyone studying science knows these names: Albert Einstein, Charles Darwin, Stephen Hawking, among many others. However, hardly anyone has ever heard of Georges Lemaître.

Simply put, Lemaître was a Belgian priest who revolutionized the scientific community with a famous theory: the Big Bang.

Even though he is mostly forgotten today, his theories proved Albert Einstein, often considered the greatest scientist ever, wrong!

Einstein and his greatest error

Still, there had to be a middle ground.

In 1917, Albert Einstein discovered a third alternative: the universe can be finite and have no boundary. It’s much like how the Earth’s surface isn’t infinite but at the same time, the Earth doesn’t have an edge where the surface ends.

As a result, the universe can be a 3-D, curved sphere, having finite volume and no borders.

Einstein’s equations also point to an expandable universe. However, he didn’t believe his own work and he was convinced that the universe is fixed and immutable.

This was, until he met a brilliant Belgian scientist.

In 1927, Georges Lemaître (Lemaître meaning “master” in French) began studying Einstein’s theory of relativity and realized the universe is constantly expanding. However, when Lemaître presented this idea to Einstein, the scientist answered, “Your calculations are correct, but your physics is atrocious.”

Lemaître needed astronomical data to prove Einstein wrong. He looked into the night sky and saw what are now called “galaxies.” Lemaître realized that the galaxies were moving away from each other at great speeds.

Lemaître also reasoned that if the galaxies were moving away they would have also been much closer at one point. The universe must have been small and compressed, later exploding gigantically in what Lemaître called the “Big Bang.”

When presented with this information, Einstein realized he was wrong. Lemaître had been right after all.

The Pope: religion mixed with science

As the mainstream public accepted the idea of the Big Bang, Pope Pius XII declared that the theory confirmed the Creation in Genesis.

However, Lemaître disagreed. He talked to the Pope’s scientific advisor and persuaded the Pope not to mix the Creation with the Big Bang.

As a result, the Pope never made a public allusion to the theory. Today, physicists argue whether or not the Big Bang was even the start of the universe or whether there was another universe before it.

So imagine how embarrassing it would’ve been if the Pope confused the Big Bang with the Creation!

Lemaître: a teacher of science and religion

During his lifetime, Lemaître took criticism from both the scientific and religious communities. Scientists accused him of mixing creation with physics and Christians accused him of putting restraints on God.

Yet, Lemaître never rejected one field or another. In his mind, they could both could co-exist in harmony. As popular British science writer Simon Singh sums up about Lemaître,

“He said that there were two ways of arriving at the truth, and he decided to follow them both.

If he wanted to explore issues of morality, ethics, and spirituality, he would look at his Bible. But if he wanted to understand the Universe… he would do experiments.”

Using science and religion, Lemaître found an open-minded, rational path to understanding. After all, he was a giant among men.

Rovelli, Carlo, Simon Carnell, and Erica Segre. Reality Is Not What It Seems: the Journey to Quantum Gravity. New York: Riverhead, 2018.

Pomeroy, Ross. “Why Georges Lemaître Should Be as Famous as Einstein.” LiveScience. Purch, March 10, 2017. https://www.livescience.com/58204-lemaitre-should-be-famous-like-einstein.html.