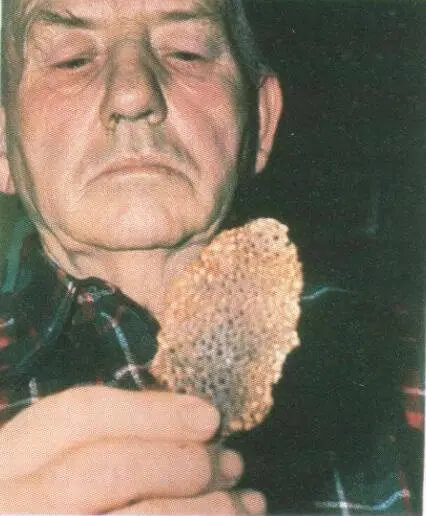 Joesph Simonton, a poultry farmer was sixty years old at the time of his encounter with a flying saucer. He reportedly received some pancakes as a gift from the ETs who were inside that craft. The farmer lived near Eagle River, Wisconsin, United States.

On April 18, 1961, Simonton was having breakfast in the late morning in his home when he heard a confusing noise near his farm. He looked out his window and stunned after seeing a silver disc hovering over his backyard. The UFO was four meters high and 10 meters in diameter.

Simonton was rather curious to check on the object than shocked. When he stepped outside, a hatch on the disc opened and three dark-skinned humanoid figures appeared. According to the farmer, they were mute and looked like the Italian. The aliens were about five feet tall, dressed up in tight clothes from head to toes.

The man said that one of the aliens had some vessel (like a bucket) and signaled him to fill it with water. He took the bucket, filled it with the water from the nearby pump, and returned it to the alien. Simonton noticed that inside the ship, it was totally dark and one of the ship’s crew was busy with the dashboard while others seemed to be prepared for cooking on a flameless grill. The creatures looked nice and offered him four pancakes that had tiny holes. After that, they closed the hatch, started the ship, slowly rose it some distance from the ground, and flew away toward the south. Simonton, holding four pancakes, watched this amazing scene with his eyes wide open.

Interestingly, at the same time, this incident caught one more witness. Savino Borgo, an insurance agent who was driving near Simonton’s farm, also saw a flying saucer.

Simonton tasted one of the pancakes but was not impressed by the friendly aliens’ cooking. According to him, it tasted like cardboard. Normally, such stories are called fake due to their bizarre nature but this one got the attention of the US authorities. After the neighbors spotted a UFO over Simonton’s farm, they called the US Air Force. They arrived with the members of Project Blue Book

One of the aliens’ pancakes was given to a local judge by Simonton who vouched for his honesty and reliability. The second pancake was received by Dr. J. Allen Hynek, and the third one was handed over to the Food and Drug Administration by the Air Force. After some analysis, it was found out that the pancakes were made from completely earthy products.

Within a few days, this strange story turned from an interesting UFO encounter into a nationwide joke. The newspapers spoke of the incident in a derisive tone, but the people who had known Simonton for a long time believed him. When Dr. Hynek met Simonton for the first time, he was quite impressed by his behavior. He wrote in one of his Project Blue Book reports that Simonton knew that they would not believe him but he did not care. He simply assured that whatever he witnessed had happened in reality.

Simonton lived In the Eagle River which is surrounded by forests and lakes and is close to the Michigan border. In the following month of the incident, the area suffered a power failure and all the telephone lines were also affected. Besides, a fighter jet (B-47 bomber) crashed 60 miles from Eagle River on February 24 of the same year, and on May 2, another plane crashed near that area. The pilot in the second crash said: “I felt this weightlessness and I was hanging by my straps” just before the crash. The place had many strange UFO sightings from 1959 to 1963 but never got public attention.

The Eagle River UFO incident has been unsolved. The Air Force said that Simonton mistook a dream and considered it a reality.