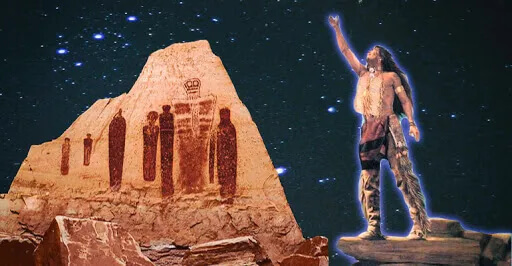 Constantly in traditions from around the world, stories about unique flying lights, impossible machines or disconcerting beings from heaven appear.

Some cultures, such as Native Americans, have a great, although little known, wealth in these types of stories.

Specifically, the legends of the Cherokee nation represents vivid encounters with the unknown entities (ancient aliens) that occurred several centuries ago.

Encounters that have been engraved in the heart of Cherokee society thanks to oral tradition and the desire to preserve their own culture.

Several of these stories have been preserved and transmitted through written sources arising from the work of anthropologists, mostly during the s. XIX, they lived with this ethnic group writing with great zeal each one of the stories, myths, legends and sacred places that were of tremendous importance for the native inhabitants of the Southeast of the United States.

It seems that the Cherokee are a human group that aroused the interest of certain entities because there are many stories that speak of strange beings in intriguing situations.

One of them was first published in 1888 before Western society, at a time when man still dreamed of being able to fly, and responds to the title of “ How are the stars. ”

On one occasion a hunting group was staying overnight in the mountains when they were surprised by two lights “ like two big stars ” that moved quickly drawing the limit with which the silhouettes of the nearby hills cut the horizon.

The whole group watched them, amazed and with great attention until they got lost behind the hills but showed up again the next night.

What could be those lights that moved at will in the night sky? The group then debated the matter and they all decided that the next day they would go into the area where they had seen the lights appear to satisfy their curiosity.

The next morning everyone went to the agreed place and began to search tenaciously for the source of those naughty lights.

After a while they came up with small creatures of round bodies that were covered with soft hair and fine feathers that glowed and threw sparks, and between them small heads poked out.

The hunters, proud of their discovery, took the creatures with them back to the camp with the intention of showing them to the rest of the village.

Thus they discovered that during the night these beings shone with a powerful glare, however during the day they did not seem to have that capacity showing themselves as small beings of grayish fur.

Although when the wind blew it took with him small sparks that started from the mane of the mysterious beings.

For as long as they were captive those creatures remained calm until on the seventh night they burst into flames “ like fireballs ” and rose in flight at high speed until they became small and distant points in the sky.

The hunters then concluded that they were stars. Another interesting aspect of the mythology of this culture corresponds to the existence of “the little people.”

These beings are frequently identified with spirits of pleasant character who enjoy music, speak their own language but can also communicate in the language of the people they meet and are responsible for teaching values ​​to humanity, although on several occasions they show a mischievous and even evil character even kidnapping children.

A legend about these beings tells the story of a child who did not want to grow up, did not want to think about what he would do when he was older and just wanted to play and worry about childish things.

One day his father told him that it was time he began to learn to be a man and that the next day he would have to attend to his uncle’s lessons on such an issue.

The boy was devastated and went to the river’s edge to cry and there he met the small people who proposed him to join them and so he wouldn’t have to grow up, they told him they would talk to the creator to make him one of them and send a vision to their parents so they would know that they would be fine.

The boy thought about it for several days and finally decided to march with the little people. Several accounts of the Cherokee expose singular facts that from a modern interpretation suggest manifestations of the phenomenon.

There is a story of a strange flying object that was once seen by the tribe and whose witnesses described it as a “ flying giant with a head shining like the sun ” cheese flew over the area and kept static time in the air so vigilant, he took land and after a while he returned to fly and was lost in the sky.

When several people approached the place where this giant had settled, they found that all the grass he had touched was burned.

Did these events really take shape in the culture of the Cherokee nation?

It does not seem far-fetched to think that several centuries ago this society was faced with strange situations that they described according to their experience and those that gave the explanation that at that time seemed more logical.

Thus, some curious bright beings that could fly and let themselves be seen as lights in the sky, could not be anything other than stars and a huge flying object whose surface reflecting the sunlight or perhaps, emitting a powerful is identified with a giant own light, it was shining like the sun itself.

An object that, as in many cases of encounters with the most recent phenomenon, has the characteristic of leaving a burn in the place where it has landed.

And the large number of stories about small people are similar to the folklore present around the world about small beings who, depending on the place, adopt different names such as elves, fairies, goblins or gnomes.

But that in turn, could correspond to the descriptions of strange beings from surprising ships described by several witnesses of the UFO phenomenon.

Were they describing these peoples, without knowing it, encounters with beings and flying objects of this phenomenon?