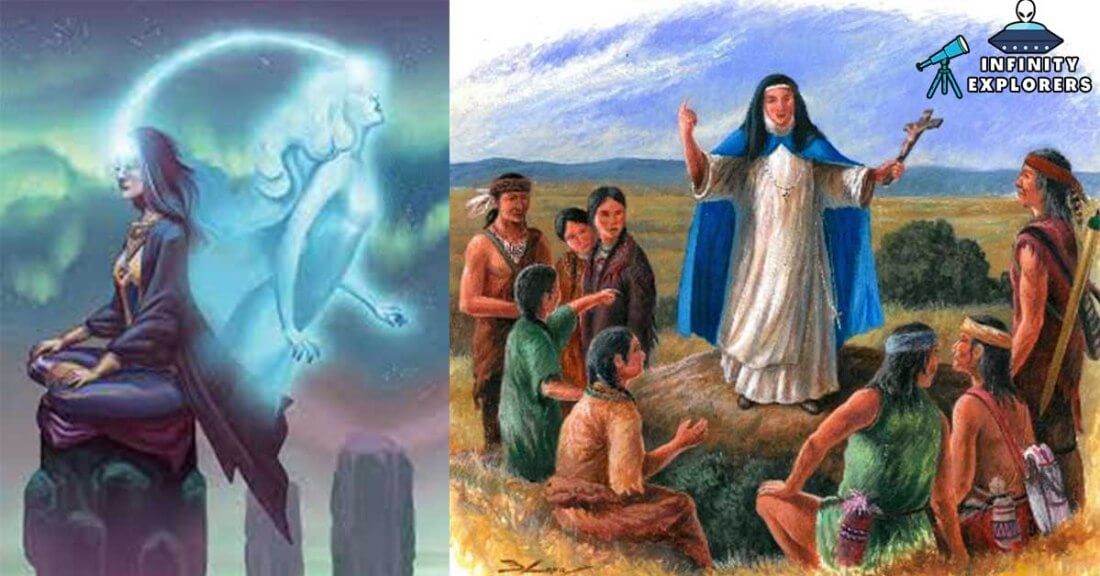 Mary Jesus of Agreda (Maria of Agreda) was born in 1602 in Agreda, Spain under the name Maria Coronel y de Arana.

From a very early age, she grew up deeply religious as she belonged to a noble family which had close ties with Franciscan monks from the San Julian monastery, located near the city.

As a child, she began to display rather strange behavior and abilities. Not only was she exceptionally mature and rationale for her young age, and also showed remarkable selfless compassion for others, her mother claimed that she had certain superpowers – she heard voices and spoke with invisible friends.

The girl also had powerful visions in which God taught her about the sinfulness of the world.

Her mother, obviously, also had some abilities, since one day she experienced a powerful vision in which a “divine voice” ordered her whole family to surrender to the church and give all their money and property to the poor, and turn her castle into a monastery, which is now known as the Franciscan Monastery of the Immaculate Conception in Agreda.

The family truly believed that this was a message from God, and because it was so compelling, they felt they had no choice but to obey.

This sudden change of fortune made young Mary join the nuns of the monastery, adopting the new name Mary Jesus of Agreda and agreeing to remain within the walls of the monastery until the end of her days, living a pious and chaste manner in prayer.

And so she continued to live for several years, until one day she knelt in prayer in the chapel, which she did most of the day and which in itself was not unusual, but this day was different.

Her face suddenly turned pale and she passed out. There was one beggar in the chapel at that moment and he claimed that when Mary fell to the floor, a bright blue haze enveloped her, and then the nun’s body began to rise into the air and soared to a height of about one meter above the floor. When Maria came to, she did not remember this, but the beggar assured her that he really saw her levitate.

After this mystical experience, her mysterious visions became more intense, and she reportedly would often go into a trance for several hours a day. When asked what she saw during these trances, Maria claimed that she was carried away by angels and God to a distant land where “people with bronze skin” lived who had primitive weapons.

She was told by God that these people are called the Jumano Indians in New Spain (present-day Texas and New Mexico) and that she was commissioned to spread the word of God among them in order to convert them to Christianity.

She claimed that during these visions she was actually transported to the New World and she really communicated with these Indians, which caused surprise to everyone who heard this, not only because it was at a distance of a huge ocean from Spain, but also because many eyewitnesses assured that Mary never left the monastery and, as a rule, was in her room during these trances.

Nevertheless, she gave incredibly detailed accounts of what she saw and experienced during these mysterious “flights”.

In about ten years, according to Mary, she made about 500 spiritual visits to the Indians, sometimes making 2-3 “flights” a day. And stories of these miracles spread throughout Spain more and more.

Initially, representatives of the Catholic Church accepted all this with great skepticism, including calling it complete nonsense. But then the missionaries of the New World gave their testimony, and then the Indians of New Spain themselves.

For example, in 1622, a New World missionary named Father Alonso de Benavides wrote a letter to Pope Urban VIII and King Philip IV of Spain, claiming that some of their Christian missionaries had already actively converted the Jumano Indians before he arrived here.

When these Indians were asked how they learned about Christianity, they said that they were told about it by a “lady in blue” with a European appearance, who also allegedly could heal the sick and float in the air.

When the Jumano Indians were shown a picture of the elderly abbess of the Franciscan monastery, Louise Carrion, they immediately declared that the “lady in blue” dressed exactly like this woman, but was much younger than her. Later they gave a detailed description of the appearance of the mysterious “lady in blue” and this coincided with the appearance of Mary.

That is, everything looked as if the mysterious “lady in blue” was in fact Maria of Agredskaya, who “flew” to them from Spain, as she claimed.

Moreover, it turned out that the countless details that Maria Jesus of Agreda gave about the appearance and lifestyle of the Indians were also completely accurate. How could she know about this?

By the way, at that time Benavides did not know anything about claims that a certain nun from Spain could allegedly “fly” back and forth across the ocean, and he did not hear these stories until he returned to Spain.

When he found out about this, he was so fascinated by these miracles that he personally asked Mary and found her very sincere, and also demonstrated a deep and detailed knowledge of the life of the Jumano Indians, their language, and the geography of the territories where they lived. She certainly could not have learned about this from the books in the monastery and its surroundings.

Mary continued her spiritual journey, and now she was seen in the New World not only by the Indians but also by other missionaries, as well as travelers and researchers. Interestingly, according to their records, they saw Maria exactly at the time she fell into a trance in Spain, adjusted for time zones, of course.

It all seemed that Maria could indeed “teleport” across the ocean because there were some statements from the nuns that from time to time they could not find Maria anywhere, as if she was disappearing somewhere.

There was even testimony from other Indian tribes in the New World who reported a similar enigmatic European woman, and their descriptions of her appearance were almost identical, despite the fact that these tribes were sometimes thousands of miles apart.

Stories about Mary of Agreda and her amazing mystical travels to the New World soon spread throughout Spain, provoking much debate and controversy, and also attracted the attention of the Spanish Inquisition. But while the Inquisition investigated her possible charge of heresy, she was never prosecuted, probably because she had long corresponded with the Spanish king Philip IV, for whom she eventually became a spiritual and political advisor.

Mary’s “teleportations” to the New World ended in 1631, and then she lived in the same monastery as an abbess until her death in May 1665, after which Pope Clement X posthumously declared her a reverend in honor of her “heroic and virtuous life.”

It is interesting, however, that although Mary Jesus of Agreda died in 1665, she seems to have continued her strange “flights” to the New World even after her death. The Indians of the regions she visited told stories of how they still saw her in the 1680s, and these sightings were investigated by the Spaniards.

Some of their reports were quite impressive, for example, one such report stated:

“A beautiful white woman with a cross came to their lands. She was dressed in white, gray and blue … She spoke to them, shouted and praised them. The tribes of Rio Colorado shot arrows at her and left her to die twice.

What do you guys think? Was this a mere coincidence, astral projection, or teleportation? Leave us your comments below

1 thought on “The Nun With The Ability Of Teleportation, Mary Jesus of Agreda”