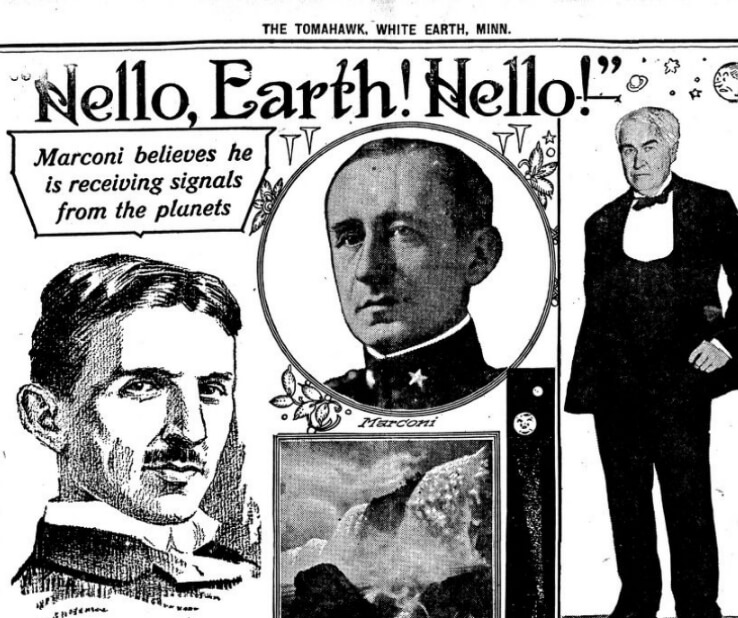 Over the past few years, astronomers have been receiving mysterious radio signals from deep space, perhaps from other galaxies. These repeated bursts of radio signals, which were originated millions or billions of light-years away, generated a theory that aliens exist. Scientists have not reached any conclusion about the source of these radio signals. They may be produced by cosmic activities, but legendary scientists like Tesla, Einstein, Edison, and Marconi believed that they come from aliens.

Nikola Tesla was the pioneer in modern technology. His inventions have changed the world. Elon Musk honored Tesla, naming his electric vehicle company after him. With such a great mind, Tesla never underestimated the theory that aliens exist.

In 1901, Collier’s Weekly published an article titled “Talking with the Planets” by Nikola Tesla, where he mentioned to have received strange radio signals from outer space while experimenting in his lab in Colorado Springs in 1899.

Tesla had been working on a machine capable to send signals millions of miles from the Earth. He shared an incident that simply terrified him. He said: “I can never forget the first sensations I experienced when it dawned upon me that I had observed something possibly of incalculable consequences to mankind. I felt as though I were present at the birth of a new knowledge or the revelation of a great truth. Even now, at times, I can vividly recall the incident, and see my apparatus as though it were actually before me. My first observations positively terrified me, as there was present in them something mysterious, not to say supernatural, and I was alone in my laboratory at night; but at that time the idea of these disturbances being intelligently controlled signals did not yet present itself to me.”

He continued saying that the changes his apparatus noted were not traceable. Tesla was aware of the electrical disturbances produced by the Sun, Aurora Borealis, and earth currents but they did not cause those signals. He said: “It was some time afterward when the thought flashed upon my mind that the disturbances I had observed might be due to an intelligent control.”

Tesla claimed that he had found a way to start inter-planetary communication. Further, he added: “At the present stage of progress, there would be no insurmountable obstacle in constructing a machine capable of conveying a message to Mars, nor would there be any great difficulty in recording signals transmitted to us by the inhabitants of that planet, if they be skilled electricians. Communication once established, even in the simplest way, as by a mere interchange of numbers, the progress toward more intelligible communication would be rapid.”

After Tesla, Italian inventor Guglielmo Marconi who perfected wireless telegraphy claimed that he had received signals that might have been sent by the extraterrestrials.
On March 18, 1920, an article published in the American weekly newspaper quoted Marconi who said: “I have encountered during my experiments with wireless telegraphy most amazing phenomenon. Most striking of all is receipt by me personally of signals which I believe originated in the space beyond our planet. I believe it is entirely possible that these signals may have been sent by the inhabitants of other planets to the inhabitants of the earth.”

He stated that he would not have been surprised if there were any human beings on Mars. “While our own planet is a storehouse of wonders, we are not warranted in accepting as a fact the general supposition that the inhabitants of our comparatively insignificant planet are any more highly developed than inhabitants (if there is such) of other planets,” he argued.

Marconi’s statement was well-supported by Thomas Edison. He believed that the mysterious signals detected by Marconi could be useful for the theory that the aliens from other planets were trying to communicate with Earth. Interestingly, Edison also experienced the same. He said that one day, in the city of Orange, he was seated on the pile of iron ore when the magnetic needle started behaving strangely. He immediately thought that it might have happened due to the static signals from other planets.

“If we are to accept the theory of Mr. Marconi that these signals are being sent out by inhabitants of other planets, we must as once accept with it the theory of their advanced development,” wrote Edison. “Either they are our intellectual equal or our superiors. It would be stupid of us to assume that we have the corner on all the intelligence in the universe,” Edison said.

Tesla obviously supported Marconi’s statements. He urged to organize a body of scientists to carry out the experiment to communicate with other planets. He explained that in 1899, when he received strange signals from space (probably from Mars), he wanted higher powers to fund his research on inter-planetary communication, but they pressurized him to drop that idea.

Einstein also did not mock Marconi for his alien signals, he even suggested that the extraterrestrials should have used rays of lights (lasers) which, according to him, could have been easily controlled.