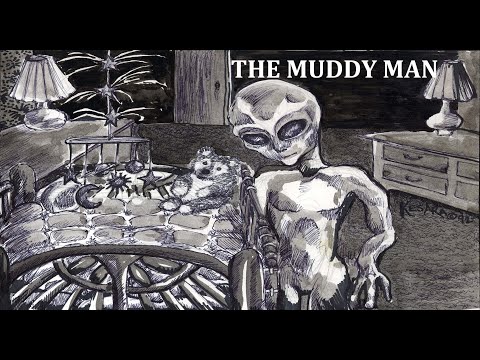 Preston Dennett
In 1963, the Sanz family moved into their new home in Arleta, California. The two daughters, Karen (age 6) and Susan (age 2) shared a room. One evening, Karen awoke to an incredible shock: a strange boogie-man-like figure emerged from the closet, floated across the room and went to her little sister’s crib. She watched in fear as the short, big-eyed creature poked its hand through the bars of the crib. Fearing that Susan was going to be taken away, Karen tried to get up. Instead, she found herself falling asleep. That was the first visit from the muddy man. But it wasn’t the last. Soon the muddy man returned. A week or two later, Karen woke up, and watched again as this same creature appeared and went directly to Susan’s crib. It looked at Karen, but once more remained by Susan’s crib. Despite trying to stay awake, Karen fell asleep. When it happened a third time a week later, Karen told her parents. “You’re just having a nightmare,” they told her. But Karen knew it wasn’t a nightmare. She was awake. And it kept happening. Week after week, month after month, this muddy man kept appearing, always going to Susan’s crib. No matter how hard she tried, Karen could not stay awake. Unable to convince her parents, Karen had nobody to talk to about it. Years passed, but the visits continued, soon mounting into the hundreds. Always, the weird creature emerged from the closet area, and went directly to Susan. Even when they re-arranged the positions of the beds, it was always the same. The muddy man seemed only interested in Susan. Unknown to Karen, Susan had also begun to see the muddy man. She was now old enough to realize that something was wrong, and that whoever or whatever this figure was, it wasn’t human. It was short, bald, with a huge head and large dark, wraparound eyes. After several such visits, Susan (like Karen had) told her parents about what was happening. Again, her parents assumed it was a nightmare. One time, Susan saw the figure appear in the closet holding a strange black box. And standing next to the figure was Susan’s mother. Except it wasn’t her mother. Instead, Susan was convinced it was something else, a disguise. Like Karen, Susan was never able to stay awake. More weird events occurred. Susan would sometimes hear her name being called in her head, over and over, “Susan! Susan! Susan!” Another time, the family went to visit Zuma Beach. Susan was in the water when she became disoriented and felt like she was being dragged away. There was a strange unexplained shift, and she found herself in a different location. Looking back in hindsight, she realizes this was a classic case of missing time. At the time, neither Karen nor Susan had ever heard of aliens or extraterrestrials. Neither of them had ever seen a UFO, so they had no idea how to interpret what was happening to them. Then, in 1969, after six years, the visitations abruptly ended. Things began to return back to normal. Susan, however, was left with anxiety. Certain big-eyed cartoon characters sent chills down her spine. She began dreaming about UFOs hovering over her house. But it wasn’t until 1988, when Karen and Susan (now adults) returned home for Thanksgiving that they reminisced about their childhood and began to connect to the dots. Susan told her sister that she used to have weird waking nightmares about a creature that would emerge from the closet. “The Muddy Man!” Karen said. “I saw it too!” Only then did they realize that they had been seeing the same thing. And when images of gray aliens began to appear on television, they finally had their answer about what the creature was. It was a gray alien. Susan was shocked, and reading about UFOs, she was amazed to see how closely their experiences matched those of other people. The only thing was, they had never seen a UFO. But that was about to change. Just a few years later, Susan’s five-year-old daughter reported seeing a “little boy” in her bedroom. That was when the unexplained nosebleeds began. And weird scoop marks on their bodies. In 1991, Karen went back home to live with her parents. To her shock, the muddy man came for another visit. One year later, in 1992, Susan woke up one morning to see a UFO landing in her backyard. Several gray aliens emerged. They were angry. Susan had agreed to go on television in a few days to talk about her encounters. The ETs made it clear, they didn’t want her to go public. Susan cancelled her TV appearance. But soon the UFOs were back, and this time Susan’s husband Hector was a witness. This video presents the true story of a long and complex series of UFO contacts that changed the lives of two sisters forever. It reveals many of the patterns of UFO contact.