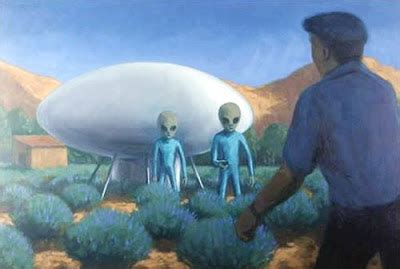 In 1965, another farmer, Maurice Masse, from in France had a similar experience to Blackwell. A strange object calmly landed in his lavender fields and two pale white, thin humanoid figures exited it. Masse estimated these figures to be around four feet tall. They also had on a strange one-piece clothing. They began to inspect the lavender around them, at this stage seemingly unaware of the farmer’s presence.

When Masse began to approach them, one of the figures pointed a stick-like object at him. It instantly paralyzed him where he stood. The figures soon got back into the craft and it took off. Masse, however, remained forcibly motionless for around fifteen minutes before the effects of whatever had frozen him wore off.

When he was finally able to move, he noticed a huge wet circle on the ground. Exactly where the craft had landed. It would set as hard as concrete within hours. It would be over a decade before anything would grow on that spot.

The short video below looks into the Masse case in a little more detail.