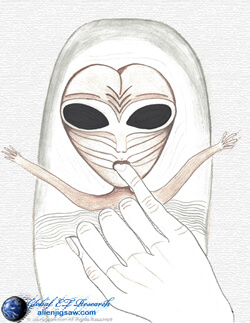 “Albeit highly disturbing, these reports have been consistently reported over several decades spanning at least 70 years… It is because of these consistently reported events that many ET contact researchers have good reason to believe that some type of human-extraterrestrial Hybrid Program is underway.”

This is the first in a series of articles which will eventually cover underwater sightings, underground facilities, and hopefully other related topics. We want to stress to the reader that people are reporting a wide arrange of experiences with extraterrestrials: positive, neutral and negative. This is because there are different types and groups of ETs interacting with people worldwide and each group tends to have a different focus. Several types of ETs have shown an interest in human DNA and familial lines and this is the area upon which this article focuses. At the end of this article are sources directing the reader to different perspectives on extraterrestrial contact.

The theory behind the Hybrid Program is supported, in part, due to accounts from female Contact experiencers who, during their pregnancies, reported having their fetuses removed from their wombs by strange appearing Beings. The reason is because prior to this, these strange appearing Beings removed an ovum from one of their ovaries and/or implanted DNA into an ovum thereby fertilizing it with unknown – perhaps other human or perhaps extraterrestrial – DNA. Male contact experiencers report procedures during which a device is placed over their groin thereby causing them to ejaculate, followed with the specimen being collected by the Beings. Both women and men also have other types of medical procedures performed on them including, but not limited to “punch” type biopsies and the taking of other tissue samples such as blood, bone marrow; skin, hair and nail samples. Other medical procedures have been reported and include the implantation of a foreign object, i.e., “alien implant,” as well as seemingly “miraculous” organ surgeries which include the intestines, heart, lungs and possibly other organs in the human body. After a certain amount of time following these procedures, the Beings then show the subject unusual appearing infants who they say are their offspring. Oftentimes the subject is asked or told to hold the infant or child while other times, the subject is shown a room full of containers filled with liquid in which fetuses appear to be breathing and growing. Later, as both the experiencer and the children age, the Beings will reunite them from time to time as they mature. Many of the children who were created during the early phase of the Hybrid Program are now adults, but concurrently, we are still seeing the creation of ever more Human-Hybrid babies so we know the program is still ongoing. One thing that has been observed without a doubt is; the children are appearing more human than previously. What we do not know is how long this program is going to continue. A few accounts that were widely reported through publications during the late 1990’s and the decade of 2000, indicated to experiencers at least, that they were “close” to accomplishing their goal – whatever that might be. Some have called it a “merging” of our species and others refer to it as a possible invasion or replacement of sorts.

Albeit highly disturbing, these reports have been consistently reported over several decades spanning at least 70 years, but we suspect this has been occurring longer than that because experiencers’ grandparents who were alive during the 1800’s also reported interacting with these Beings. It is because of these consistently reported events that many ET contact researchers have good reason to believe that some type of long term human-extraterrestrial Hybrid Program is underway. Some reports point to the idea that some of these offspring are being sent to live elsewhere, either on other planets or on some of the Beings’ enormous craft; possibly even ET space hubs and bases on nearby moons in our own solar system. Supporting this theory are reports from contact experiencers who have been shown that some of their offspring will be kept in a type of hibernation-state such as stasis or suspended animation while they are transported to other planets and other places. They are told that the time to reach these other worlds takes decades which is why the slowing of the aging process is required. In two well researched cases, the Beings stated outright that they were born aboard their craft and have never seen their own home worlds. With the number of reports of USOs or Unidentified Submersible Objects, there are some who believe these Beings and their (or our) offspring are living beneath our oceans, deep within undersea abysses.

Some of the Beings have raised these children apart from the human family. In addition to the information we just covered, sometimes referred to as “disappearing pregnancies,” / “missing fetuses” / “alien abductions,” experiencers report encounters during which they are presented with and interact with completely human children in addition to the presentations of their “alien” children. Sometimes experiencers are told these children are their own while other times they are told they are theirs: the ETs’. The “Family” referred to as the Tall Greys have made it clear that their children “are precious” to them and they “will never give them up.” Regarding one human-hybrid adolescent, a tall Grey telepathically stated emphatically,

“He can never live on Earth because humans will never accept him.”

If we understand the message here, it appears there is a significant subset of hybrid children born of humans or who have a least one human parent, who will neither be returned to anyone nor will they be left or abandoned to live here. On the other hand, there are teenage hybrids and adult hybrids who appear to be living in close proximity to us. Some people have seen them up close and others have actually been to their “residences.” Some contact experiencers believe they are in fact human hybrids themselves or at the very least, they have retained memories of their previous lives as being from elsewhere. For more in-depth information on this topic, please refer to the sources below.