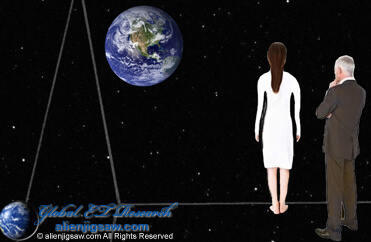 AJ and the Man Behind Orione

I was inside the most amazing structure I’d ever seen. It appeared to be completely glass. A non-reflective glass. I met a man who introduced himself to me. He seemed human in every way. Taller than I. White, gray hair. Normal clothes. Unpretentious even though I may have been standing next to da Vinci or Mozart in a 21st century human body, but I didn’t understand who he was until later.

When I met him, he told me he wanted to show me something. We were inside a transparent structure. For a split second, I wondered if I would fall to Earth, and as I had this thought, the man was aware of it. He gave me his arm, as a gentleman would, and I lightly held on to his arm as we began to walk. As if to reassure me and make sure I was not afraid, he said,

“Think of it as walking on a glass surface.” I looked down and I could see thousands of stars beneath my feet. I saw our two sets of feet walking on a non-reflective transparent surface. I was walking barefoot and he was wearing brown dress shoes. Space was all around us. Up, down, on either side and in front of us. I took a couple of steps forward with him and saw that it was safe. It seemed we were walking in space, but there was a solid surface beneath our feet. I looked up and in front of me – at an area that appeared to be a football field in length – and there was nothing but space. It was as if someone had placed a transparent floor in space for us to walk on, but as I looked ahead of me, I could just detect glass walls and seams between the floor and walls. As we walked, the man conversed with me. He told me a lot of things – so much information – but what I remember most is that this was his creation. He conceptualized this “glass spaceship” we were in. It was his creation.

When we reached the other end of the structure, I saw Earth ahead of me and slightly to my left. There was something in space off to the right of our planet that had an unusual structure. The man said this was his “vision and creation” as well. It wasn’t too far away from Earth, as far as space is concerned. He called it Orione. In English, it sounds like Areon.

As we looked out of the far side of the transparent structure, I focused back on Earth. I first saw the continent Africa and then I saw my own country, the United States. I’ve seen Australia, the Solomon Islands, and parts of southern Asia and Europe from space before, but never my own country. It was beautiful to see Earth from space again. I again looked to the right of Earth and this other object called Orione was clearly there.

The Earth seemed to be rotating faster than I imagined it could as I watched Africa and then North America move into view. As I looked at the U.S., there was technology being utilized because something zoomed in on the United States a couple of times bringing it closer into view. I saw red and blue lines that created a circular grid and then it zoomed in again. It was as if something were reading my mind and zooming in to the place I wanted to see. One more zoom and I could see the State I lived in; and there it was. There were no lines on the map or the Earth itself, but I knew exactly where to look. All the while, this man was talking to me in a calm voice, telling me all sorts of things about his work and his vision. His ideas, concepts and creations were magnificent. He spoke about the place to the right of Earth. Orione. It was an artificially created structure that is not too far from Earth. It is cloaked or exists just outside of our visual perception. It has approximately four protrusions and it glowed a soft white in space. It was a little fuzzy which indicated it was there, yet not quite there, as if there is a phase differential or phase shift to the structure.

He was clearly an intellectual; advanced both mentally and spiritually. He seemed above “royalty” but I could not label him or put a title to him. He was simply too intelligent for any of that. I felt really safe with the man and now, after everything I saw, I feel it was a huge honor for me to have met him. I can only guess that he met with me because of my involvement with the Beings. If given the chance, I would have stayed there. To come back to Earth and be here – it’s like going back in time to the Stone Age, and having to be around people who have the intellect, violent behavior and awareness level of cavemen. …These people will never be able to move forward because they don’t want the truth. They can barely read and educate themselves about anything other than facebook or twitter.”

“They are slaves to their own ignorance.”

“They don’t care about the other species on our planet.”

“They don’t care about their planet. Any species that does what they do to their own and to their planet does not belong in space.”

“There are humans in space – there are truly other humans who are much, much more advanced on every level – but they are not humans as we think we know them, right?”

“Perhaps they were born elsewhere and just look like us?”

“They are not of the same, limited soul capacity as most of the humans who reside on Earth.”

“I don’t belong here. Living here is like living in the past. I can’t imagine anything here will progress unless most humans on this planet are either genetically altered or replaced.”

“They continue to poison their planet, torture and mutilate the animals so they can consume them, but they throw more than half of those precious lives away in the trash. Then they throw their trash in the oceans – they don’t deserve to live on this beautiful planet.”

“Why don’t the ‘advanced’ Beings stop the suffering? Put an end to this?”

Since this amazing encounter with this man, I learned something else about his creation. In Italian, the word that sounds like the word I heard, was Areon. However, the same pronunciation of this word in Italian is Orione. The translation for Orione to English is Orion.

One of the many questions I have is: Could this man be one of the Beings associated with the Amicizia group? The Friendship Beings? If so, this would mean they never left and have continued to interact with people from Earth and the Friendship Program is continuing… and that, at least, is a hopeful sign.