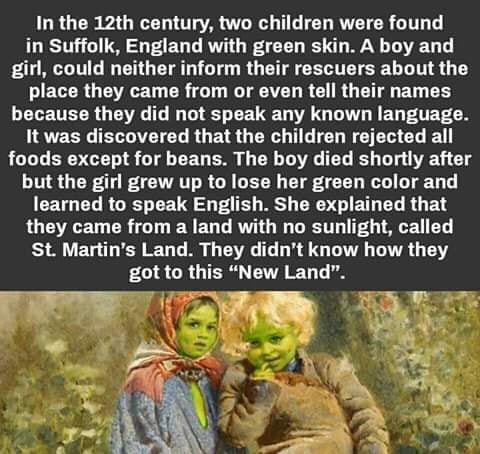 THE GREEN SKINNED CHILDREN OF WOOLPIT

Sometime between the years 1135 A.D. and 1154 A.D., two strange children were found near Woolpit, England.

Workers were harvesting their fields when they heard frightened cries; investigating, they discovered two children, a boy and a girl, terrified and huddled near a pit. They were screaming in a unknown language, and their clothes were made of a strange looking, unknown material… but stranger still, the children’s skin was green.

The two were taken to the home of a man named Richard de Calne, where the local populace attempted to take care of them… but the children refused to eat or drink anything that was offered until someone brought in some fresh bean stalks. The children eagerly grabbed these and opened the stalks; and when they saw these empty, they started to cry. When shown that the beans were in the pods instead, the children quickly ate their fill and ate nothing else for some time after.

Soon after they were found, the boy sickened and died; but the girl became healthy and hearty, eventually losing the green hue to her skin. When she learned the local language, what she told of her origins only deepened the mystery. She said that she and her brother had come from a land with no sun; the people there, all green, lived in a perpetual twilight. When she was asked how she had come to be found outside the pit, she could only say that she and her brother had heard bells, become entranced… then the two of them were in the pit and could see the light from the mouth of it.

Though the girl lived long after her discovery, eventually marrying a local man, she was never able to give any further help in solving the mystery of her and her brother’s origins and odd arrival in Woolpit.

A common variation on the legend states that from the children’s original homeland, a “luminous country” could be seen far away, separated from their homeland by a large body of water. Another common variation is that the children called thier original home “St. Martin’s Land” or simply “St. Martin”, and that the people in said land were all christians with churches to worship at.

Also, most accounts either mention no date for the story, or place it around A.D. 1200; in ‘Unexplained!’, Jerome Clark says that the event either happened in the reign of King Stephen or that of his successor, King Henry II; both Rodney Davies (in ‘Supernatural Disappearances’) and Harold Wilkins (in ‘Strange Mysteries of Time and Space’) say the same thing. Paul Harris, in an article in Fortean Times #57, places the event in the reign of King Stephen rather than Henry II, and, as you will see, there is good reason for agreeing with this placement. King Stephen’s reign was brief, and places the occurrence at sometime between A.D. 1135 and 1154.

Harris states that there are two differing versions of how the children arrived in Woolpit. In his first version, the children followed the sound of bells through an underground passageway to Woolpit; in his second version, he says the children were swept up by a whirlwind and deposited in Woolpit. Harris also asserts that the change in the girl’s skin color was caused by a change in her diet.

Rodney Davies also describes the children’s clothing as “dress-like”, and says Richard de Calne lived in a nearby town called Wikes, which is where the children were taken.

Harold Wilkins in ‘Strange Mysteries of Time and Space’ implies that the name “Martin’s Land” may be a mis-representation of the name “Merlin’s Land”, but he is the only source for this alternative name.

Katharine Briggs in ‘The Fairies’ says the Green Girl claimed to have come from an underground country.

Margaret Rowan gives a particularly over-dramatic version of the story in her book ‘House of Evil’; detail-wise, though, it’s the same story except that she calls the man the green children were taken to Richard de Caine, and describes him as the “richest landowner in the district.” Also, she says that the girl claimed her home was ‘Not far from here [Woolpit], but cut off from us by a great river of light’.

In ‘Strange Disappearances’, Brad Steiger says the children entered a cave following some small animals; the cave just kept going down deeper and deeper until, somehow, the children found themselves in the fields near Woolpit. Brad Steiger, Rodney Davies, and Harold Wilkins all state that the girl worked as a servant for Richard de Calne, while Jerome Clark (in ‘Unexplained!’) says she worked for a ‘knight and his family,’ instead of de Calne; he also adds that the girl married and “reportedly lived for years at Lenna in Suffolk.” Steiger says that the Green Girl married a man from Norfolk; and both Davies and Wilkins say she married a man of/at King’s Lynn in Norfolk, and Davies adds that she lived for years in King’s Lynn. In all cases, it’s agreed that no one knows whether or not the Green Girl ever had children.